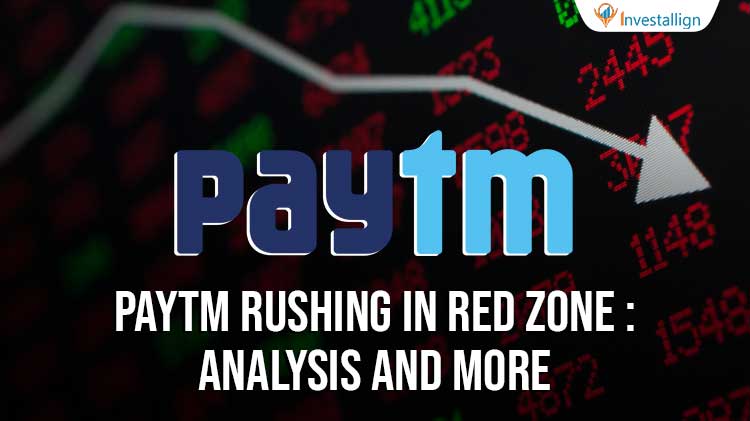 Paytm has been one of the most famous startups in India. The reason is its diversification and market penetration. Paytm is a fintech company and it has been trying to get into all sorts of financial divisions possible. The company works in the mutual fund segment, Insurance segment, payments segment and more. It is also providing Fastag services linked with the paytm account. The paytm stock was listed on BSE and NSE at 2150 Rs in the last phase of previous year. However the share has not at all witnessed any green zone for the initial investors.

The share prices have been constantly degrading over time. The share has reached a price of 520 Rs now. This is a 76% degradation from the original price. This is a heavy discount within the initial 4 months of launch. The company is losing a heavy chunk of money and the retail investors are tasting the sour taste of the same. However since the last 2 weeks the share has been diving everyday by 2 to 5%. This is not a good sign for any startup getting listed. This has ensured that people’s trust on paytm would not last. However there are multiple ratings attached with the share from Macquarie. The company said that Paytm would achieve a target of 760 Rs in February. However post the controversy of RBI the share price predictions have been revised. The current share price suggested by Macquarie is around 450 Rs in the next 2 to 3 weeks.

Paytm is one of the most famous shares in India due to its presence in retail and wholesale segment. People have recognised online transfers as paytm. Thus the name Paytm has been transitioned into an impact for pursuing an activity. The current status of the company shares is very terrible. The first and foremost reason is the COVID fall. During the beginning of the last two months the Ukraine war along with COVID has affected the market valuations. Hence the companies have lost a major chunk in valuation. Paytm has been one of them. It is in fact a leader of losses. The share has now eroded 76% of its IPO price. The reason is very simple :- Bad performance, unfavourable market performance Selling pressure.

The company has not yet achieved the milestone of having one profitable quarter. The entire company is running in losses. The company has now reached a stage wherein the major chunk of its valuation is eroded. Marketers are fearing of creating a new buying position in the company. Many analysts such as Ravi Singh from ShareIndia are suggesting to stay away from the company until and unless it hits the price band above 800 Rs.

The major resistance level is of course 2150 Rs. Yes, just kidding. The current levels suggest that the company needs to get over 650 Rs for gaining a stable price range again. In current levels the company is set to devalue till the 450 Rs price mark is achieved. Extreme strong support is created at 450 Rs. hence one can think to buy again the share of the company between 450 to 500 Rs. Before that no one should enter given the risk involved in the company.

Paytm has got one of the dream runs in the history of Startups. It has got investors from the top players of the world. The company possesses the expertise and also has the capacity and power for a high amount of growth. All that is needed to be seen now is how Vijay Shekhar Sharma can plough back the loss of share valuation that has hit Paytm. The share is currently valued at 524.30 Rs and has a market cap of 34000 Crore Rs.