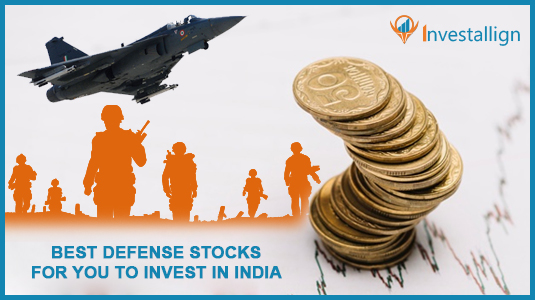 If you are looking to diversify your portfolio, defense sector stocks are a favorable option. These stocks have a great potential for profit because you can always count on the government undergoing some defense projects over the year.

When it comes to army and defense, India proudly holds the fourth most powerful armies of the world. The Government has decided to earmark almost 3.5 lakh crore as its a part of the Annual Budget of FY20. Moreover, about 1.18 lakh crore has been allotted for fund equipment and projects. As the Prime minister’s ‘Make in India’ campaign completes five years, defense minister Rajnath Singh announced restrictions on the import of 101 weapons and military platforms on 9th August, including artillery guns, assault rifles and transport aircraft in what could give an influential spur to the domestic defense industry.

The embargo on imports is designed to be progressively executed within 2020-2024. The purpose behind the formulation of the list is to appraise the Indian defense industry about the anticipated claims of the armed forces so that they are better prepared to realize the goal of indigenization. The settlement will allow the private defense industry to produce the items in the glum list by using their plan and expansion abilities or adopting the technologies created and refined by DRDO to meet the demands of the Armed Forces.

As soon as this was announced, the best available defense stalks in India rallied up to 13% in the spirit of becoming ‘Atmanirbhar’.

Below listed are the list of stocks available (on investallign as well) that contribute to this sector and have the high-grade potential for returns.

In the month of May, the government hiked foreign direct investment (FDI) via the automatic route from 49 percent to 74 percent as part of reforms in the defense division to promote the government’s Make in India crusade. While these are all sound suggestions, for acquiring the best defense stocks in India, it is essential to be adjudicating assets based on genuine accomplishment and syndicate indicators.

If you are viewing this piece, we believe that you already have a trading account. (If not you can always get an online trading and Demat account on the Investallign). Window-shop a few defense stocks via your trading account and discover which ones you can count on to be fruitful and lucrative. Spend time scrutinizing the trends of these stocks over a few weeks (or even longer if you have the endurance) before you decide to give in. After all, you want to buy when the stock price is low and sell when it is high.