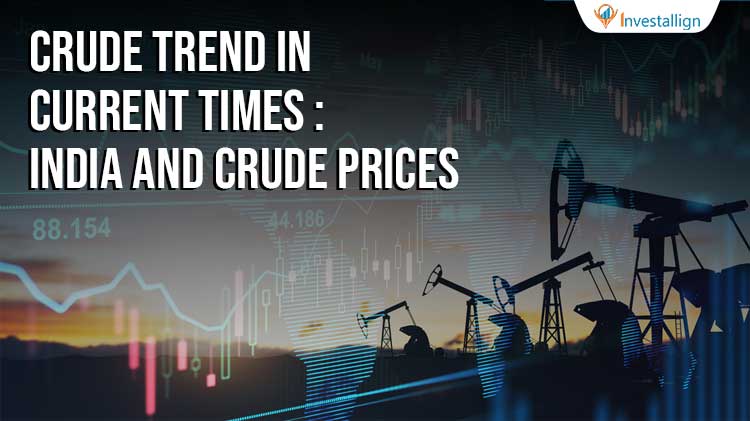 Crude Oil is one of the most important resources found across the planet. The reason is the majority of all the materials include crude oil or its residues in the making process. From Petroleum to Plastic all the raw materials need crude or its other by-products as base material. Hence there are no second thoughts on the value of crude oil in the daily lives of everyone.

However the prices of crude have been a lot shaky lately due to several reasons. The most important one being the invasion of Ukraine by Russia. It is no hidden analogy now that whenever a war like situation arises the two most important things that will go up in valuation will be crude and gold. The reason is both these things have utmost importance in daily lives. Crude is required for production of major items whereas Gold is used as a security against printing new notes. Thus economies rely on these two commodities.

Lately due to the unexpected invasion of Ukraine by Russia, the crude prices have hit their all time high milestone. The crude prices trailed at 133 Dollars per barrel which is the ever highest price range. His range was noticed 13 years back in 2008 during the Subprime crisis. Thus Crude prices have geared up into a high price range. But the reason is not only War Situation between Ukraine and Russia. The reasons extend themselves to trade restrictions placed on Russia due to its attack on Ukraine.

The sanctions put on Russia subtract its exports to the USA. Also many European Countries have aligned with the US to place sanctions on Russia. This has created the artificial scarcity of Crude Oil. On the other hand demand is bound to rise. The major reason for the imbalance is that Russia supplies more than 12% of World’s Oil. So sudden removal of Russian Oil Exports have created scarcity Crude Oil making it reach its all time high prices.

The Indian government is playing a major neutral role amidst the War between Russia and Ukraine. Sanctions have been placed on Russia for business from major nations and Unions but India is not at all following up with the trend. On the contrary the Indian Embassy was majorly focused on getting its citizens and students out of the country. As of today India has got all its citizens out of the Ukraine Province in one or the other way around. Alongside this India is constantly trying to resolve the issues between the two nations. The Ukraine President has also urged the Indian Prime Minister to have a conversation with Putin and use his relations to stop the war.

On the economical front the Indian Markets did tank a lot given the situations. However the recovery is taking place in a slow manner as the situation is getting better day by day. The two countries are having talks and Indian markets on the other hand is increasing its gains to reach to its all time high levels. The Major resistance is faced around 17000 Levels in current market trend.

The War may have hit the other nations but it has caused major benefits for India and the Indian government. The most important benefit or a side that the world witnessed was India is no longer running on the shots decoded by other nations for its fate. In other words India has reached a stage where it has the power and capacity to work its way out without any dependence. In the war situation as well both the nations used Indian P.M.’s help to attempt a resolution for the scenario. Along with this the major benefit that has come forward is in crude news.

The Russian companies are agreeing to set up trade with India at a discounted rate. Yes, it is expected that Russian companies will soon initiate their trades with India. IOC has already initiated one trade cycle for May delivery of Russian Oil through a Dutch trader named Vitol.

The Indian Government is in talks with the Russian Government to set up trading infrastructure for Crude oil imports from Russia. The trade is to take place at Indian Terms. The colonies of Russia are set to offer a 20 to 25 dollar discount per barrel to Indian companies. The exchange will take place with Indian and Russian Banks in the middle. For the same purpose one Indian bank is yet to be decided for the business. The situation will allow one Indian Bank to set up its account in Russia and Vice Versa. The transaction is possibly gonna happen in Indian Rupees or Yuan. The rubble is not thought of as a major exchange mode given its volatility and down price due to the war.

Further news on Crude trade is not enlightened by the Indian Government. But if the business deals go through it will have a major impact on India’s Crude Oil Imports and give it an upper hand in current Crude Price Hike Scenario.