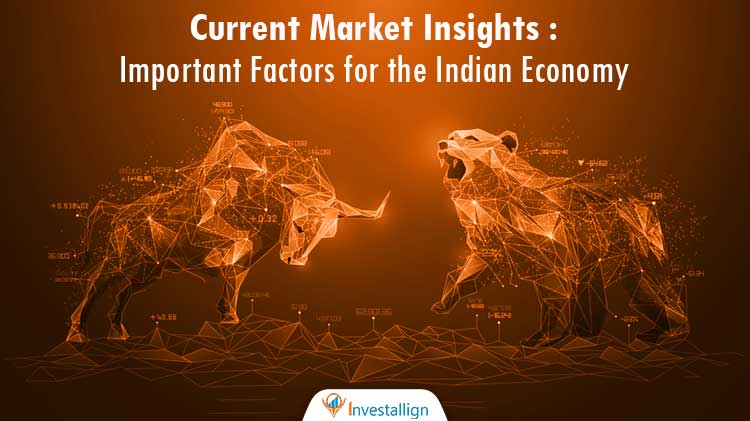 The Indian Equity Market has seen a huge volatility since the last 2 weeks. The markets were cruising at a high level of 18200 and then went down to 16600 levels. All of this was the reason for a major selling pressure created in the market by FII. This created a panic among the investors as well. One of the major reasons for this bear rally was constant fall in the Share prices of Reliance, Bajaj Finance, TCS and major Nifty50 companies.

The drag down has continued since the last 2 weeks. Even this week the market has been constantly ending its day in red. The red zone streak was broken after 4 days when it ended slightly higher than yesterday’s closing price. On the other hand the inflation has reached its peak. The prices of all the goods and services are so high that one cannot manufacture products due to the lack of demand created by the hike in prices.

Every industry is either facing the crisis of shortage of material or is running low on demand. The prices of every industrial commodity such as Cloth, packaging material, Petrol, Diesel etc have increased which has caused a high decrease in production. This is the after effect of the China Lockdown phase due to power shortage and COVID spread out.

The current focus for every investor and trader is shifted towards the IPOs. The IPO market has grown very rapidly in the Indian domain nowadays. Every company is giving out at least 30 to 50% return on the listing day. This has been possible due to the large inflow of cash from the retail investors. Hence the IPO is getting oversubscribed and is experiencing huge gains on listing.

One of the reasons behind the market fall is the IPO launch. There have been roughly 7 to 8 major IPO launches in the last 2 weeks. On the other hand, the market has been witnessing huge volatility. This is due to the money outflow from shares and investments coming into the IPOs. The Indian companies are right now not performing well as per the set standards in the previous 2 months.

The companies such as IRCTC, IEX, VI etc which gave major returns back are witnessing major sell off and high amount of volatility. In such markets no one wants to hold such risky shares and even invest into major ones such as Reliance and TCS. The reason is their constant dipping pattern. Reliance has been one of the major shares that has caused such a downfall in the Indian Indices. It holds a string share in the index weightage list. On the other hand due to its Aramco deal failure and other penalties levied on the companies in the revenant past the investors have been offloading the share due to the future concerns of the company. Also the JIO business is facing strong competition from Airtel in current times and hence the main line of business for reliance in current times is getting affected.

The Indian Economy is turning towards two major business segments right now. First of them is the advancement in chemical manufacturing and IT. Second field is the development of the Electric Fleet of Automobiles. In the future every investor should focus on the automobile industry again as the volume of the same is going to get shifted towards the Electric segment.

This will lead to a huge scale of growth possible for the battery, chemical, IT, automobile accessory, Charging station companies etc. This is an unseen opportunity for all the investors across the world. The reason is all the major automobiles across the world are giving out their targets of turning their major fleet into electric vehicles. The Indian market has been captured by Maruti in the current situation.

However due to the electric vehicle industry the major effect is going to be levied on Maruti Suzuki only. The reason behind this is their plan to start manufacturing and selling electric vehicles 10 years from now. Thus the other companies such as Mahindra, Tata, etc will have an edge over the other automobiles in India.

Other Investment Opportunities and Government Support

Secondly, the Government is also trying to support the domestic manufacturing of goods so that imports can get reduced over a period of time. This has been given more support through the latest scheme of  Govt. The centre is providing 76000 Crore Rs for Semiconductor industry development in India.

Where BSE and NSE are keen to get ahead with their international exchange idea in Gandhinagar, cryptocurrency and NFTs are breaking the market for the traditional stock market. The youth is turning towards the newest available modes of investing and compounding their money. This would never end the markets but will definitely affect the volatility and growth speed only if these modes of investment and trades continue.

However the Indian markets are slowly coming into a stable zone but only if the OMICRON danger is over. With an increase in the number of cases for OMICRON assumptions for another major market correction are getting stronger.