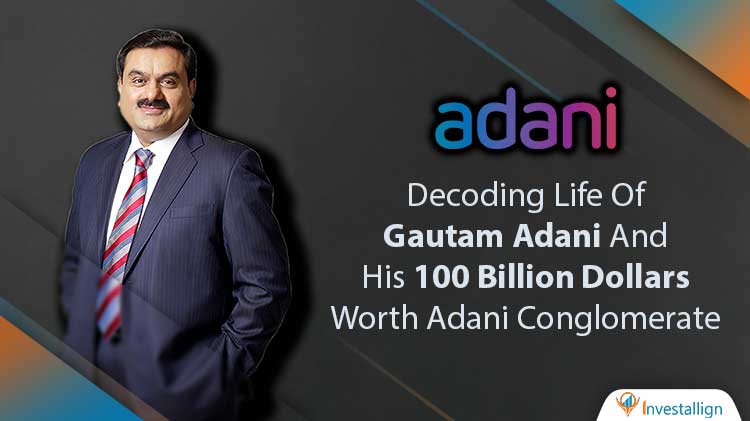 Many people in India are struggling and hustling to achieve their dreams of being successful. For this people start early and try to become financially independent. For this people quit their college or after completion of college life. The same goes with the life of Mr. Gautam Adani.

His origins are from North Gujarat in Tharad district. The district is well known for its businessmen community. Gautam Adani has 7 siblings. Gautam Adani was born in Ahmedabad in 1952 and he completed his schooling from C.N. Vidhyalaya. He went to Gujarat University for his Graduation but dropped out from it. His father had the business for textile manufacturing but he never wanted to go into it so he decided to move to Mumbai. There he got the job of a diamond sorter with Mahendra brothers. He worked with them for more than 3 years and later on went to create his own diamond broker firm in Zaveri Bazaar. After setting up that firm he was called back to Ahmedabad by his brother to run the newly established plastic manufacturing plant. Hence he came back to Ahmedabad and joined his brother’s venture and the rest is history.

Mr. Adani came back to Ahmedabad in his 20’s to work with his brother in a newly owned plastic manufacturing firm. Here both the brothers developed their business at large and went on to expanding their business venture. They started importing and exporting PVC material and  this was the first successful venture by Gautam Adani. Both of them earned handsomely from this venture and started Adani Enterprise Limited. Thus the international trade experience began through the PVC business.

In 1991 India undertook liberalisation and the Adani family took maximum advantage of the same. They established multiple businesses related to Metals, Agriculture, Textiles etc. and hence increased the sources of income. This gave the Adani group the booster that they needed.

The Adani Group progressed handsomely when they got their first breakthrough in 1995. It was regarding the deal with the Government for managing and developing the Mundra Port. It was the time when Adani became the first company to privately own a port in India. The Group also launched the first jetty and completed more than 4 MT of cargo  transport in the initial years.

After this Gautam Adani set up Adani Power in 1996. The arm was established to generate power through thermal sources of energy. Today Adani power is the largest private thermal power generator in India. The company also manages many coal extraction sites across the globe in Queensland, Australia and India.

Gautam Adani set up two more well known companies under Adani Group known as Adani Total Gas and Adani Green. Adani green is set up for the purpose of producing solar energy and Adani gas is for commercial and household usage of Gas in India.

Gautam Adani and His Worst Experiences in Business and Life

There was a time in the conglomerate’s journey where the company was under the debt of 90000 Crore Rs and it did not have the liquidity to pay the same. Also the asset valuation was under development but the time became better when the Adani Enterprise and Adani Port business went on expanding and acquired more ports and airports across the country. Today the Adani Group has a net debt of more than 1.25 Lakh Crore Rs but the valuation of the Group is more than 7.5 Lakh Crore Rs. Hence the company has made significant progress in the last decade. Also Adani group owns Adani City known as Shantigram which is situated in Ahmedabad.

Gautam Adani had suffered from two major life threatening experiences in his entire life. He was kidnapped in1999 and held hostage. Ransom was demanded for his release at that time. However at the end he was released without any Ransom. Also in 2008 when the terrorists attacked Taj Hotel in Mumbai, he was one of the hostages in that incident. He got past that incident as well.

It is no hidden fact that the Adani group has progressed the maximum since Narendra Modi became the Prime minister of India. The business tycoon is rumored to have closed door deals regarding the acquisition of airports and ports in india. Also it is alleged by many people that the land that Adani acquired for the Shantigram project in Ahmedabad was bought at very minimal process due to Narendra Modi and his influence.

Narendra Modi is also rumored to have good relations with Reliance owner Mukesh Ambani. Hence the political connections of Gautam Adani are deep and a very important part for the success of the conglomerate.

The Companies owned by Adani group and which are publicly listed are :

These companies have focused on different fields of business. Although the business line is different, one thing is very particular and common in these companies. The thing is the stock valuation growth in the past 5 months. Given the fall of markets in March 2020, the valuations of major firms and major companies in every field have suffered. The markets recovered a significant value from March lows and are attaining the high value of 15000 today.

While looking at the market growth three companies of the Adani group have grown tremendously in the last 3 months. They are Adani Gas, Adani Green and Adani Enterprise. These stocks were near the 400 valuations and have now achieved the milestone of 1200 Rs per share. This is a robust increase in the companies valuations wherein the fun fact to know is that the companies are not majorly profitable and also they have not progressed this much that their valuations triple in number in just 4 months.

Hence the Adani Group is one of the most suspicious groups in the eyes of CBI and SEBI as well. The Adani group has multiple investigations going on under its business ventures.

Given these facts aside the most prominent and recent milestone by Gautam Adani and Adani Group are :

Gautam Adani is also a humanitarian. He has founded the Adani Foundation for welfare and social progression of India. The foundation focuses on education facilities to children in rural and semi urban areas. Adani Group also owns many Schools and Colleges under different fields like Medical Science, management, Infrastructure development, etc.

Gautam Adani has a vast business association which started with Diamond sorting firm and Plastic manufacturing plant. Today the Adani group has spread its roots in Mining, Port, Airport, Power Generation, Data Centre and Defence business as well. Gautam Adani is the biggest wealth gainer of 2020. He left Jeff Bezos and Elon Musk way back with his speed of growth and expansion of business. The major surge in the wealth of Gautam Adani has been a part of the valuation expansion of the Adani Group in 2020-21. Today the company controls around 7 airports in India which involves Bombay airport (2nd busiest airport in India). The company is also the largest private port operator in the Nation.