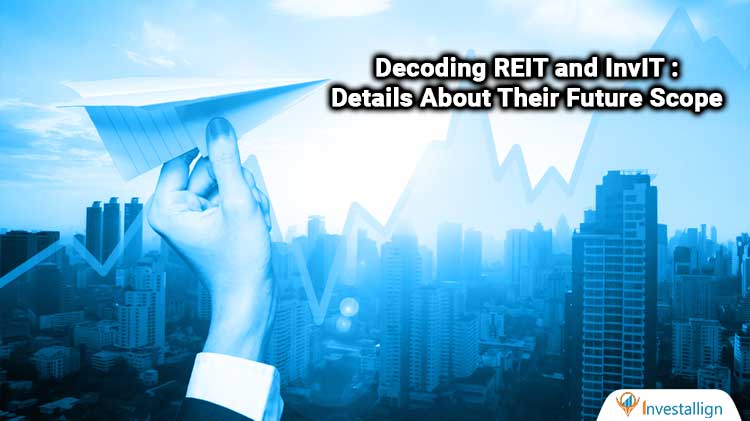 What are REITs and InvITs ?

REIT and InvIT are frequently used terms in the Indian Stock markets. The reason behind them is the launch of multiple company’s IPOs in recent times. The most famous REIT category IPO launch is Happiest Minds. In the InvIT category a recent IPO launch is done in the name of POWERGRID InvIT.

Before diving into the usefulness of both these terms, let’s understand what they actually mean. For REIT one can say that they are mutual funds in the real estate sector. In a fund many company’s shares are accumulated and investors can bid a share in the fund as per their potential. Similarly the mechanism for REITs function. Just one change here is in place of companies the investors look after the properties the REIT owns and rents. Hence the analysis pattern is more or less the same, just the category for looking into is different.

Difference Between REIT and InvIT

The major difference is the source of investing. In InvITs the company invests the money into infrastructure projects such as rods, highways etc. Once the project is done in a phased manner the returns are also disbursed. However the returns are similar to those in REITs.

Similarly REITs focus on investing into real estate. They believe in rental incomes. They also build malls or buildings and sell them. Hence they believe in real estate development and buying – selling. Thus the spot of difference between both of them is their mode of investing.

Both of the categories are involved in long term projects that will give away returns over a period of time. However the investment into REIT is considered safer. The reason is their investment mode. They prefer real estate development and investing into houses and malls, industrial pilots and schemes etc. These plans give away rental income and are easy to sell as well.

On the other hand the development and completion of infrastructure projects such as roads – highways takes a considerable amount of time. Also the possibility for a successful implementation of the plans is less and the company’s development is totally based upon successful bidding and acquisition of good projects.

Future Scope of REITs in India

There is a high demand for houses and real estate in India. Due to the increasing population and rising standards of living, people are demanding a better lifestyle and hence an upgradation into their way of living. This directly affects the business of the REITs. These companies not only give away rental properties or sell properties but also face a massive upgradation into the asset value. In other words, the price of land becomes costlier day by day. This gives rise to multiple benefits to the REITs under one business umbrella.

The companies generally buy the land and develop the projects on their own. In other cases direct buying and selling of readymade possession is also made. These assets are then converted into money generation tools through rent.

With increasing population. People are also finding new ways of investing. It is no rocket science that people want a safe mode of investment with high returns. If one cannot buy properties on his own potential, he or she can at least get some share in the partnership of buying units of REIT plan.

Thus the future scope is bright ahead for the REITs companies. The reason is not only their multiple benefits from the business procedure and flow, but also the future scope in India. The current time has been deviation of many major investments to India from China. The world has stopped believing in China and hence Indian government can get maximum benefit out of this situation. Meanwhile developing such industrial projects or houses or malls would benefit these REITs in bulk amounts. Hence one should definitely think of investing into such REIT plans.

It totally depends upon redevelopment of trade and business in India. Another factor that could affect is the transport facility and the development of infrastructure in India. The current situation has led to a need for better roads and infrastructure inside the country. Adding up a point discussed above with major investments getting deviated towards Indian soil, better infrastructure facilities would be demanded.

Hence there are chances for many better and potentially profit gaining projects to come into the Indian domain. However people prefer this mode less as it is more risky in nature. It is also available in large lots sizes and hence not everyone could afford it. This segment also has to deal with the political pressure and other aspects related to the same. Hence the InvITs can develop with a future need of better infrastructure facilities for a high growth in commerce and trade.