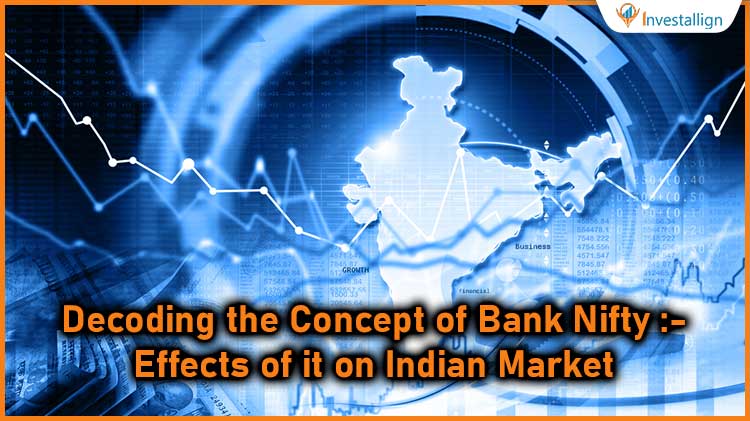 Among the share distribution of Banks in Nifty 50 the proportion of various companies are as follows :

Bank Nifty consists of all the Financial companies in it. These financial companies are all banks. Hence the index is known as Bank Nifty. The most powerful bank in India is obviously RBI. But among the commercial banks SBI holds the maximum strength. Similarly among the private companies the most powerful bank is HDFC Bank. Also Reliance HDFC banks also leave a drastic impact on Nifty 50 index. The reason is the 9.72% weightage associated with it. The bank Nifty consists of 12 stocks. The base for the index is taken as 1 January, 2000.

Futures and Options With Bank Nifty

The Bank Nifty is the most volatile index in India. It operates in Futures and Options contracts as well. The lot size of Bank Nifty for Futures purchase is 25 units. Hence one lot at price of 35000 Rs accounts for 8.75 Lakh Rs. The future expiry for Bank Nifty works as per the other elements of market only. Hence it expires on the last Thursday of every month.

The options of Bank Nifty operate in a very unique manner. The special feature is the expiration date for it. The Bank nifty Options expire on every Thursday. Thus the options are traded for one week.

The Bank Nifty Futures trade at an average premium of 80 to 100 Rs from its cash price. However the premium amount shows fluctuation based on the market situations. The most fluctuation is noticed when the future contacts expire.

Bank Nifty accounts for a minimum of 300 to 500 Points movement on any given day. Thus the traders always keep an eye on this index.

Bank Nifty Consists of the top performing banks in India. The composition is based on 12 stocks entirely. The latest share are mentioned in the list below :

It is the most powerful bank in Indian financial system after the RBI. SBI aces with the amount of deposits that add up to its tally every year. SBI is not a volatile stock. The Nifty 50 share of SBI is 2.14%. SBI accounts for 11.74% share in bank Nifty.

HDFC Bank is the most dominating private bank in India. It is so strong and fundamental that Nifty 50 comprises 9.72% weightage of it. HDFC Bank accounts for 27.41% part in bank Nifty.

It is the fourth most important private bank in India after Kotak bank and ICICI. It is included in Nifty 50 with a share of 2.84%. Axis Bank accounts for 14.03% part in bank Nifty.

The CEO of Kotak Mahindra bank is Uday Kotak. He is the most successful banker in India. He is one of the masters in banking business and has changed the entire Kotak bank around in the past 10 years. Kotak Bank holds 4.05% share in Nifty 50. Kotak Bank accounts for 13.02% part in bank Nifty.

It is the newly found Banking share. It’s share price doubled after the COVID fall. However the current prices are lower than its actual worth. Bandhan Bank accounts for 1.93% part in bank Nifty.

The bank posted its first profits in the previous financial year. IDFC First Bank accounts for 1.26% part in bank Nifty.

The bank is trying to recover from its previous blows of fraud. Punjab National Bank accounts for 0.73% part in bank Nifty.