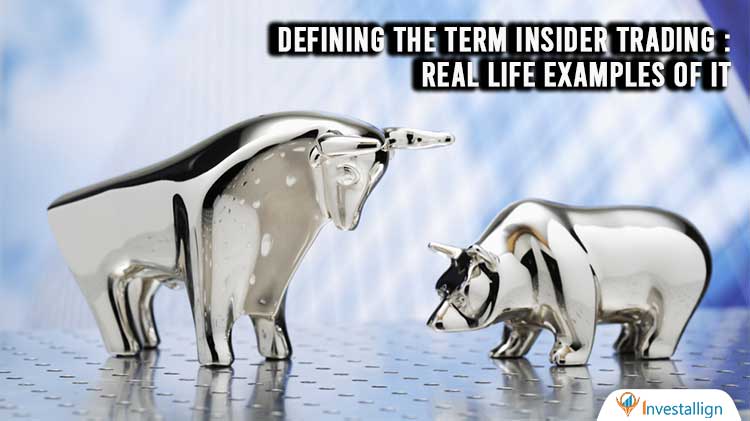 Insider trading is usage of privileged information for performance of trade. Whenever a person holds more than 10% of a company’s he or she becomes the insider of that particular company. The shareholding presents them with more information regarding the company as they get a seat at the table. Hence whenever a person holds such a position it is barred to make a trade of that company’s stocks as he or she can use the inside information to take a long or short position and benefit from that. This is the concept of insider trading.

Being an insider does not mean that the person can never trade in that particular company. In such canvases the person has to inform SEBI about his or he trading positions and then execute the trades. In India there are very infamous cases which involve insider trading. Some of them would be presented below.

The company’s drug for cancer got rejected due to certain reasons. The shareholder of company Martha Stewart sold her holdings for 50$. After this the share took a dive and lost 40$ in valuations. By this she got off early while the rest of the public suffered from loss. Martha Steward was a close friend of the CEO Sam Waksai. She was sentenced to a fine of 30000 dollars and 5 months of imprisonment for the same.

Sam Waskai on the other hand transferred his holdings in his daughter’s DEMAT account. After that he tried to sell those shares but the brokerage firm caught this trade and denied to execute it. After this incident the company forced him to resign as CEO. He was charged seven yrs of jail time and 4.3 million dollars in fines. This incident is very common for insider trading. This is the direct approach for insider trading. It is easy to trace such trades as the portfolio of responsible insiders is affected.

Many years ago the Reliance Industries were banned from derivative trading and in another case the owner Mukesh Ambani along with multiple authorities were fined for insider trading. The decision came after the company and Ambani together got involved into manipulative trading bringing the price of shares down. This allowed them to take more delivery of shares on basis of their permissible legal amount cap. By this incident the company and Ambani were fined 70 Crore Rs.

Raj was a famous hedge fund manager and he made a good 60 million dollars from his skill sets of running his hedge fund. Later on due to some manipulative trades he was investigated by SEBI. In the investigation it came forward that he was committing insider trading in many ways. He took tips from various people inside the company, Other hedge fund managers, Key employees of I.T. companies and many more ways. After the discovery he was fined more than 90 million dollars.

Insider trading has many implications implied. In India majorly insider trading is settled by paying off the penalties. The penalties can vary from a minimum of 25 Crore Rs. to 3x profits made on that trade. One can also be imprisoned for 10 years in this crime in India.

In the U.S.A insider trading is a very serious crime. One can be imprisoned upto 20 years and the fine has 5 million dollars as an average.

In these scenarios employees are the ones who have privileged information about the company. Hence they are the insides of the company without any shareholding. When a CEO buys back shares of his or her company they are accumulating the shares by paying the shareholders fair value. Hence this is also a legal move of insider trading as well.

It is important to keep these trades into consideration as the news of the CEO buying back the shares influences the share prices. This makes the share increase in valuation. Hence keeping a track on such transactions is necessary.

What are the impacts of Insider Trading ?

Insider trading has a major impact on the psychological behavior of shareholders. If the CEO or multiple directors are offloading the shares it leaves a negative impact on the shareholders. This signifies that maybe there is something wrong within the company or the company has many legal implications implied on it. If this happens while the quarter results are coming close then it directly gives a message that the company’s profits are going to shrink or the balance sheets are going to have low cash flow and high debt.

Similarly when the insiders immensely buy shares it gives an impression that the company is going through expansion or major desks are coming through. Also during quarter results if this happens the company indicates a major rise in profits or reduction in debts.

Milken was a famous wall street personality who got involved in the Junk Bond business. He invested into low rated bonds and made huge profits from them. In 1986 Ivan Boeskey was charged with insider trading and he involved Milken along with him. He said that Milken was also involved in his scandal of Drexel Burnham Lambert.

Later that year Drexel and Milken both were charged with insider trading. Drexel came into an agreement with the government and paid off their liabilities with 650 million dollars of fine. Due to this Milken left the company and his junk bond business fell apart. This caused huge losses to the shareholders. Due to the collapse of the bond market Drexel Burnham Lambert filed for bankruptcy. On the other hand Milken was charged guilty and was sentenced for 10 years of prison and fines of 600 million dollars.

He was a writer publishing blogs into the influential. He was able to draw the attention of many. People followed his advice for investing. Based on the news he got from inside he told his broker to execute trades on his behalf. This made both of them accumulate 700K dollars of profits. He was caught when a journalist from another company caught wind of it and reported it to the SEC. Due to this fraud Winans was sentenced to prison for 18 months and fined 5000 Dollars for his crime. Winans is an example for breach of finance journalism ethics and insider information.

He was the CEO of Enron Corporation. Skilling created a market of natural gas for the company in 1997. He suddenly left the firm one day in 2001. He said that due to personal reasons he is leaving the firm. Later in 2002 the entire scandal came forward when he offloaded his chunk of shares into the market. After him leaving the company’s real picture came forward wherein the company suffered heavy losses. Also due to this the company’s shares felt drastically and it went bankrupt as well. It was the highest amount of bankruptcy in America till date.

He was summoned by the FBI in 2006 and was charged for twenty six (26) yrs of imprisonment.