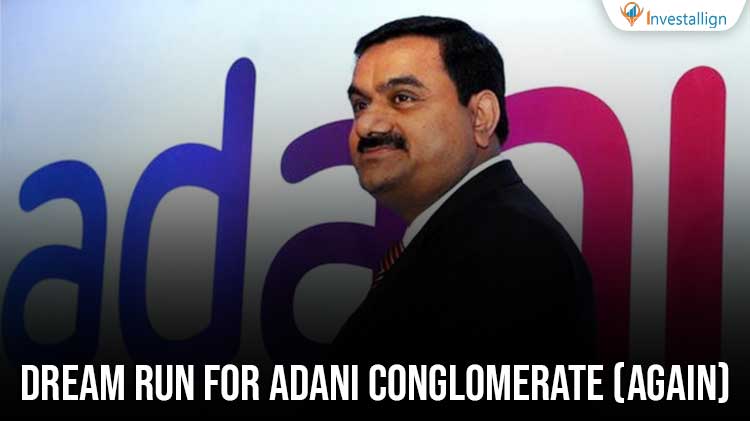 Adani Conglomerate is taking on the entire Indian business industry in current time. The reason is the rapid growth of Adani share’s valuation. The Adani family was one of the fastest advancing families in net worth over the last two years. Since COVID crisis the Adani stocks have been rapidly increasing in market valuations. There was even a report in 2021 which displayed that Gautam Adani gained more money than anyone else in the entire world in one year. He also left Elon Musk and Jeff Bezos behind. Currently few of the Adani stocks are hitting constant circuits and others are also reporting rapid gains. The same scenario had happened back as well when the markets were recovering from the COVID damage. Thus the Adani conglomerate is on the rise once again.

The companies under Adani Conglomerate are Adani Green, Adani Enterprise, Adani Ports and SEZ, Adani Transmission, Adani Power and Adani Total Gas. This year around there is also one new inclusion under the conglomerate’s portfolio. The company’s name is Adani Wilmar.

All the Adani companies are currently like the crown jewels of Indian markets. Anyone who invests into Adani is getting great returns. The reason is still not clear with the Adani Stocks are increasing in such a rapid manner. However one can only watch the wonderful returns that it is giving to the market participants.

If we analyse carefully then Adani Stocks are almost 25% up since the launch of Adani Wilmar 2 months back. Stocks like Adani Enterprise are 25% up from the Wilmar launch date valuations. Currently it is trailing at 2199 Rs per share. However on other hand the Adani Transmission shares are trailing at a great valuation of 2690 Rs per share. Adani Gas is around 2500 Rs per share and Adani Green is its main Jewel with 2860 Rs in valuations. The reason behind Adani Green being so important is its inclusion in the top most valued companies of India and Asia. The company has left behind Bajaj Finance and HDFC in this race and achieved the 8th position.

Adani Ports is one of the most fundamentally sound companies of the Adani Group. The company also has a high percentage of Promoter holding and has been showing returns in the past 2 months. The share price of Ports is currently around 840 Rs. The share was trailing below 700 Rs 2 months back.

The major winners in this time’s run are Adani Power and Adani Wilmar.

The share has been under a high pressure bear zone as its valuation was close to 14 Rs. two years back. The company was not performing well and had a poor performance in previous times. Its value was already degrading with time. However the company got spun off once the news for buyback of shares kicked in. The Adani Promoter group was planning to buy every share of Adani Power back from the shareholders. This news gave a momentum boost to the company. With this the company also started posting better quarterly results which gave a head start to the gains.

The current value of Adani power is 223.25 Rs. The share has been increasing every day in valuations. The value of Adani Power has particularly increased by 100 Rs in the last 1 month. This has been one of the major plus points for the Adani Group and Adani Power. The reason for rapid growth was Adani Power crossing its all time high of 160 Rs per share.

The food company is one of the major FMCG in India. The company has already given almost 2 times the gains of its IPO Price. The previous price of Adani Wilmar on listing was 230 Rs per share. However currently the share price of the same is 636 Rs per share. This means 400 Rs gains since IPO launch. The surprise in these gains is that it only happened in the last 2 to 3 months. The IPO of Adani Wilmar was launched at the end of January.

Thus since then the share has given 200% returns to its shareholders. This is incredible for any company. The reason behind such a rapid gain is the increased volume of trading in the stock and its product line expansion. Adani Wilmar is among the top leading companies in its segment.

The prices of Adani Ports, Adani Wilmar and Adani Power are still lower than their targets. AS per analysts the price of Adani Ports will go above 1200 Rs in near term. Also the prices of Adani Wilmar will reach above 1000 Rs and Adani Power is expected to cross 400 Rs benchmark soon. The further road for Adani group seems smooth given its pending deals or merger and mega projects.