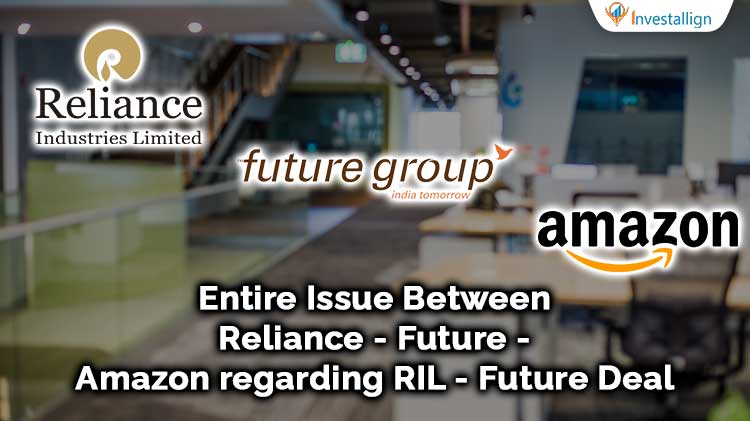 Reliance and Future deal came into an agreement where RIL would buy Future retail. The deal is a part of Reliance’s plan to strong arm its retail business. Reliance has started its business in the telecom sector and has done very well through its in house brand JIO. After JIO, Reliance is trying to increase its business in other sectors so that not only the OIl, Gas and Telecom segment is profitable but the whole Conglomerate works hand in hand.

To move ahead in this plan Reliance bought Future Retail from Kishore Biyani at 3.4 billion dollars. This deal would increase Reliance’s assets and make it the most active retail chain store in India. The deal would crack up the business of D-mart as both of these companies have been a rival since ages. As per the deal RIL would expand its presence with more than 1500 stores. These stores would be credited in the balance sheet of Reliance Retail.

The entire deal was going as per the plan and no interventions were heading in their way until Amazon came into picture. Jeff Bezos owned Amazon said that this deal violates the previous deal that Future retail made with them. In 2019 Amazon and Future group made a deal wherein  Amazon will buy 49% stake in Future Coupons Ltd. Also there was a condition added to this deal which states that Amazon will get the first right to buy into Future retail at time of sale of the company.

After Reliance and Future retail got tied into this deal, Amazon came into picture and registered a complaint with Singapore court and sued Future retail’s deal.

Future group in a hearing said that they were shocked why Amazon had come into the picture and suddenly filed a deal. The group said that they already informed Amazon about the company’s position and its deal. The Group Chairman Kishore Biyani said that he reached Amit Agarwal who is the head of Amazon India. Amit was kept in loop about the entire deal.

As per Future retail this move by Amazon is solely an attack on the deal as Amazon does not want Reliance to take over Future retail business and acquire 1500 stores. This would bring Amazon’s business into jeopardy. Amazon is the online giant in India as well. It has a large sales revenue number generated from India. As per the recent deal between Facebook and JIO where Whatsapp is given transaction rights. It is used as a tool for buying and selling so Amazon’s business was suffering.

Amazon is taking this chance to get back into the market and it does not care at all about the company’s working or company’s employees. Future group said that Amazon is neither willing to invest and buy the company nor does it want to sell the company to other conglomerates.

Also the Future group is claiming that they are not selling any stake in their company but they are doing a sale of assets which is not at all a violation of the original Future coupons deal with Amazon.

What Are the Possible Reasons for Amazon To Sue this Deal ?

Amazon is the online shopping centre of the world. It has generated handsome revenue from sales in India but due to composition from Flipkart and other companies it’s business was suffering. After that blow now Reliance has come into picture and is taking over Future retail which will give RIL a fleet of 1500 stores set up across India. This will directly hamper the revenue team of Amazon.

Also Amazon wants that this deal should be made void. The possible explanation on this is Future Retail is highly under debt and the company cannot make a comeback in near 5 years. On the other hand Reliance is a deep pocketed firm and with additional cash flows these stores can be expanded and they would attract the consumers who preferred Amazon before.

On the other hand Amazon came into a deal with Future retail where both companies agreed that Future retail will sell products online on Amazon with a condition of delivery to consumer’s location within 2 hours in some cities. Also Amazon is already facing competition from JIOmart as they have started selling products online and RIL is also using Whatsapp as a way for dealing and transacting with consumers. So if this deal goes through Amazon would lose a large business and would suffer in potential losses.

Courts Involved and Their Decisions

The case was initially filed in Singapore Court by Amazon. The company reported about the break of agreement involved in the deal and hence sued Future Retail. Future retail had already agreed on a deal with Reliance to sell all its 1500+ stores across India to RIL. Singapore court said that it agreed with Amazon and the deal should be put on hold. Hence the 24730 crore Rs. deal is put on hold. While the Singapore court agreed for an interim stay on the deal, Amazon moved Delhi High court in this regard.

The court mentioned that if Amazon is not willing to offer the same money or buy assets like Reliance is doing why is it implying the stay ? Also if they are willing to buy the company’s assets then the court is no longer required in the way. The status quo appeal from Amazon is not valid. The court was on the edge of denying about the appeal as well.

At the end the Delhi Court allowed the Future Group to continue working on the deal. Future group can get the deal ready as per their timeline and schedule. It also stated that any U.S based giant cannot interfere in domestic deals. The authorities like SEBI and NCLT should not halt their work procedures based on their personal business agenda.

The next hearing on the case is set on 26th February, 2021. The day would be very important as the expiry would have ended on Thursday (25th February). Also Reliance is a major player to move the market decisions. Hence the key decision from the courts is going to be the most important thing that would be looked up at on that day.

However the main thing to notice is that Future Group failed in stopping Amazon to reach out to Government bodies and hence the issue has now been stretched out. The good news for Future group is that The CCI and Anti Trust Authority of India has approved this deal.

Stocks That Suffered and Possible Predictions On Stocks

After the claim by Amazon the Stock of Reliance industries ranked by almost 200 Rs. from 2100 Rs. Also the stock witnessed no major upside during the unstoppable bull run. The Future retail stock is also staggering due to this case and the highly stressed debts on it.