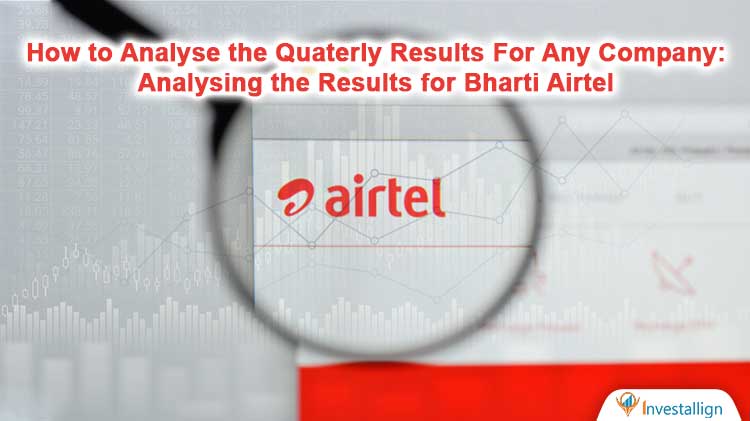 Analyzing the quarterly results is the most satisfying task for any investor. It shows him the return on his investments and company’s performance for the money he has invested into it. Along with it the company displays its potential and return capacity with the financial figures. Hence the quarterly results are more crucial for companies to attract the investors pool towards it. Now what are the most important aspects to be taken into note while analyzing the results. The balance sheets and other financial statements are all important but the best attractions are :

The importance of every element has been explained in previous articles as well. Now to understand the extent of analysis lets consider the latest earnings by a domestic telecom giant Bharti Airtel.

In the initial stage we consider the important numbers such as customer base. The customer base of Airtel is 471 million customers and it has expanded upto 18 countries. The company is currently enjoying the position among top three network providers globally due to its reach upto 2 billion people. This establishes that the company has great customer base and excellent potential for global expansion. It has also started multiple set top box schemes under Airtel Xstream and Airtel Xstrem Fibre. This defines the varied product line. It is also involved in ad tech business and cyber security business.

All these factors establish the fact that the company is a major player and hence it’s too big to fail in the near future.

Now an important fact here is that the results have ended in March 2021. So the results can be compared on a yearly basis as well.

Considering the nature of Airtel’s business the most important factor is ARPU. This means average revenue per unit. The ARPU is a measure of a company’s profit making potential per user. The company reported a drastic increase in the ARPU of the year end. The ARPU for the 2020 year was 135 which has improved to 145 this year. The venue has also increased in a sizable manner. It is 1 lakh Crore Rs. which is a major upscale form previous year’s 85000 Crore Rs.

Lets focus on the other basic figures such as EBIT, Net income and EBITDA. The EBITDA for 2020 was approximately 35000 Crore Rs. which has increased to 46000 Crore Rs approximately. After deduction of depreciation and other financial incomes the final EBIT figure for 2020 was 7500 Crore Rs. This amounts to 16600 Crore Rs in 2021. Thus all the figures show a double growth. This is a really great sign for the company given the strong competitor base in India. After the JIO’s dominance and consumer poaching the company has managed to get back on track.

Overseas and Domestic Customer Base

The company’s dominance has been focused in India since many years. This also reflects in its active customer base figures. The Indian Customer base is 13.1% more than previous year. This is a lesser acquisition than Vodafone Idea and Jio, yet the important feature is the customer base expansion is constant and not deteriorating. The South Asian business has been downsized by 2% approximately and the African business on the other side has gone up by 7% approximately. So overall the company has added new customers on a major scale.

The company says that it reinstated Sunil Mittal as the Chairman of the company. The company has also said that the operating margins have shown significant upside. Airtel has also updated its corporate structure to promote digitalization and its importance in future course of business. The company improved the product line with the infusion of Airtel IOT this year.

Ratio analysis is also a major part of analysis. To refer to the ratio analysis method visit FINANCIAL RATIOS. Along with it keep a watch on insider trades, promoter holding and FII investments in the firm.

Obviously the major question at the end is whether one should invest in the company or not. The answer is yes. The company has high debts and also has losses reported year on year. But the figures suggest that the company has shown growth in operating margins and even the revenues. This could aid the profit potential of the company. With a double rate of growth, tech companies could display positive results before the end of next year. Also the competition in India is not major. There are 3 top companies so it is quite easy to devise a better strategy for attracting a customer base. With increasing use of smartphones and internet connectivity in India, the company could benefit in major scale in future. Hence INVEST in the company but avoid trading in it.