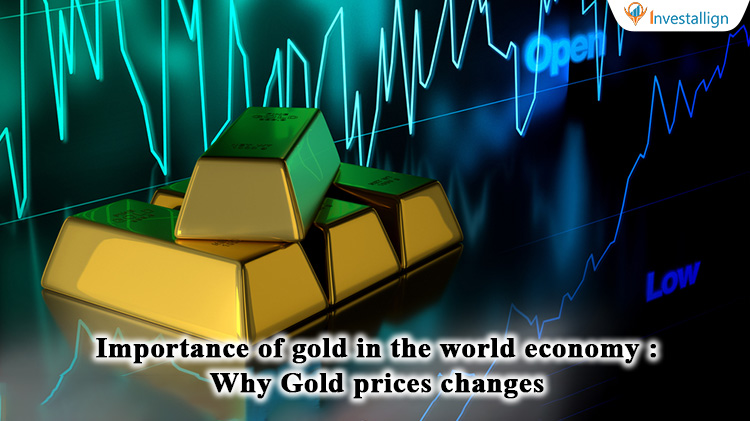 Gold is one of the most important assets for the entire world. It is the most preferred investment among all others. The reason why gold is so important is that all the economies of the world use Gold as a reserve in exchange for printing currency. Hence Gold is used to maintain the balance between inflation, economy and country’s exchange rate (indirectly).

Gold is produced majorly in China, Peru, Australia, U.S, Russia and South Africa. Till today almost 2 lac tonnes of gold has been mined. Since the year 2016 there hasn’t been any significant increase in production of gold. The reason behind is the easy gold has already been dug. The gold left is hard to get out and costs more than it did due to the machinery and mining expenditure. This is the reason why from past years the gold price has shot up like anything. The only reason is more demand and less supply.

Also it is said that today only 25% more gold is left to be mined in comparison to the 2 lac tonnes already mined. This means that an approximate of 50000 tonnes of gold is still left to mined (US GEOGRAPHICAL SURVEY)

Now when dollars get weak it increases the value of other currencies and makes gold the best investment. Now demand for gold increases and that pushes gold prices higher.

Gold and interest are highly correlated. When the interest rates go down people shift to gold in comparison to bond rates. This is done to safeguard the money in times of interest declining. On the other hand when Interest rates increase money is moved from non-income generating assets like gold (short term) to bonds to get benefits in the short term.

Also for buying gold in large quantities the investors have to take loans at high rates hence when interest rates of bonds go up or converge or go up they prefer bonds over gold to earn an extra piece from the risky investments rather than the safe investment.

Whenever there are high chances for increased rates of inflation, investors shift directly to gold . In times of inflation stocks and bonds diminish in value giv9ing gold the upper hand and making it more attractive in terms of investment. Gold is looked up as a safe asset and it is opted whenever there are chances for an unlikely decline in market or interest rates or a situation of a crash. This helps to push the gold prices up and that was the exact same case in this year 2020 from march till date (35000 Rs. – 53000 Rs.)

If we look at historical data for Gold price than :-

The gold prices were constant since 2013 -2017 but  from 2018 there was a sudden rise in prices. The major reason behind that was the scarcity created. Easy gold has already been dug and hence more mining would cost more as miners have to dig deeper.

One of the major reasons why gold prices rose above 50000 this year from 35000 in March’20 is the crash in the world economy. This means that when the economy goes down the price of gold increases as it is the sole reserve against protecting the economy from a crash. The central banks and government trust gold as a safe metal and keep it as reserves.

Hence there is a reverse relationship between gold and economy. But if Gold went up Due to market crash then the question which comes in mind is why won’t it go down again when markets have come back to their all time highs. The reason is the demand for gold and increasing trust of people in it as a safe investment for the long term.

Hence, Gold is a very safe asset which is looked at the time of crisis. To sum up the elements which affect the gold prices are :