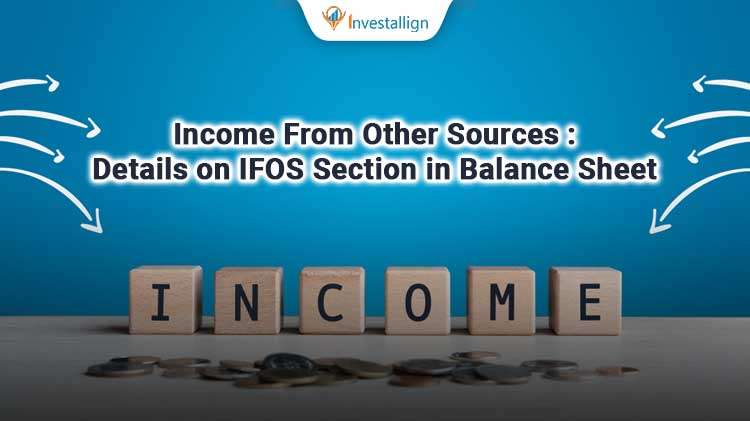 First of all let’s understand the various heads of income. As per the I.T. department all the modes of income are divided into 5 heads. They are :-

Thus all such heads have their sub heads for the classification of all the income sources included under them. Currently for considering IFOS we would focus on its sub heads. The major sub headings for Income from Other Sources are :-

Hence there are various modes of receiving income from other sources.

The income earned from the stock investments is recorded under this head. The income earned is taxable under two heads known as STCG and LTCG. These are said to be short term capital gain and Long term capital gain. There is also one rule. The losses from stock markets can only be set off against the gains from the stock market. This is to say that if a person makes a loss of 10 Lakh Rs during a year, then his losses are not accountable for deduction from then income earned from business or salary or any other source. This is to say that any income earned from share markets cannot be considered against deduction from business or professional loss. Similarly any losses made from share markets are accountable for deduction against the incomes generated from the share markets only.

The dividends received from stocks held are also included under this section. One thing to note here is that if divided if received by an individual then it is taxable directly. However if the dividend is exempt from tax if the company that issues the dividend is registered under DDT that is dividend distribution tax. Here the dividend received is already taxed by the issuing party and hence the investor is not obliged to pay any surcharge taxes on the same.

The life insurance income earned is also covered under this segment. Whenever a person takes on a life insurance policy there are two ways of maturity. One comes during the maturity time and other in the event of the death of a person. Here there are two ways of taxability. If a person gets the amount before maturity then the premium amount should not exceed 20% of the maturity amount. Otherwise the exemption is not applied. However in an event of death of a person the entire income is given to the nominated person and no tax is applied on it whatsoever. In both the events income earned is considered under the IFOS section.

Gifts and Lotteries under IFOS

The income from other sources in the balance sheet hold a completely different overview than what is discussed above. The above mentioned things refer to an individual whereas IFOS in Balance sheet refer to a company or an organisation.

For instance let’s consider the interest income earned by a company if it disburses loans to other organisations or employees within its organisation. Also one should remember about the investments made in assets and properties which are not used but rented to other businesses (when the main source of business for a company is not rental income or real estate). Hence all such modes of investment would always generate income for the company. However they are not the mainstream of business. It is not the business line for which consumers put forth their money in the company.

Hence the IFOS segment of any company should always be low or else it is said that the company is not focusing on its business. On the other hand it is generating income from other modes of investments and has lost its goal and aim of earning profits. It is a small segment but carries a major role in deciding whether the company is working in a good way or not.