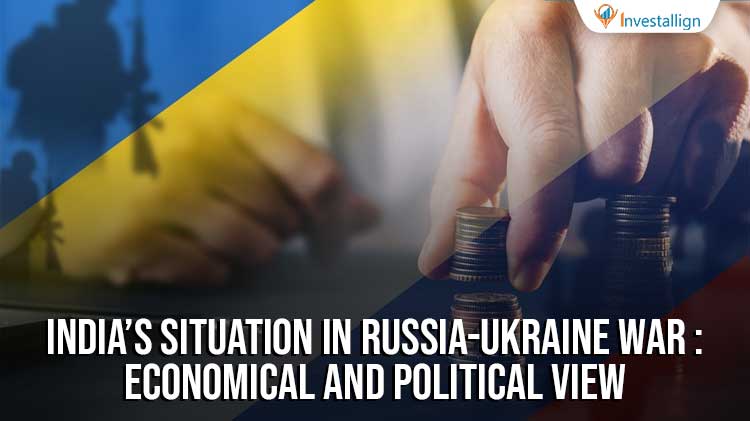 India has been one of the best politically stable nations in the Russian – Ukrainian Crisis. Throughout the talks and battle between the two countries India has taken a neutral stance. It has been the best and major influencing decision from India. The reason behind this is pretty simple. India has a long standing relationship with Russia since the battle where only Russia came to its help against the world for the Bangladesh And Pakistan Crisis. This relationship is valued by the Indian Government. Alongside this the relation between India and USA have been improving since the last few years. Narendra Modi is playing a very diplomatic and unbiased role on the War front.

If India wants it can show its support to Russia and then the war would merely end in a few days. However if it joins the USA-NATO ally the relationship with Russia gets damaged forever. On the other hand if the Indian government agrees to participate in war, China is always keen to invade Indian territory. This would result in a major crisis for India in the end.

Ukraine’s president has urged Narendra Modi to have a conversation with Putin to stop the invasion of Ukraine. Of Course Russia has three times the army of Urine. Thus Russia being a superpower has the upper hand in the ongoing battle. However pretty it seems the Russian domain is also experiencing a lot of problems due to multiple sanctions put on it from the European Union and USA. This resulted in a 50% loss incurred in the Russian Market Index on the day of invasion. However the markets recovered as well by 27% post the day of decline.

Thus Indian Government is seen as an influential body who can be able to convince a superpower like Russia to rethink its move or deviate its objectives through sources other than war. On the other hand currently Pakistan’s PM has been under the limelight due to the reckless statement of Experiencing Excitement in such War situation. This remark displayed a bad image for Pakistan in front of the world.

PM Modi and the Foreign Ministry of India have been under constant efforts to bring back their trapped citizens from the Ukrainian Region. This project was undertaken by Air India under its Vande Bharat Mission. First flight for the same also retired to India. However when the second rescue flight was on its way, it was forced to get back to India with empty hands as Russia had already begun its invasion.

Moreover in this invasion it also destroyed the major airport facilities of Ukraine in Kyiv. Thus the flight had to be called off. However the Indian government is in talks with Poland and Slovakia and other countries to take in Indian Citizens as hostile until their evaluation is done.

In such a war-like situation, the Indian government has convinced Russia as well as the Ukraine Military to let go of every vehicle with an Indian flag on it. This should be considered as a wave off in case of face off. Tus such immense efforts have been put through by the Indian government for rescue of its people from Ukraine.

On the other hand, the USA and other nations have given up on their citizens. They said that citizens should try t get underground and stay at bomb shelters. No rescue can be done by the government for their trapped citizens. Hence the Indian government is making a mark for the highest order among its citizens and among the world proclaiming its mantra of PEACE.

The battle has been a result of the USA’s thirst to sell its weapons to Ukraine. However, alongside the USA, Australia, and even some countries from NATO have offered to give Ukraine military equipment. This has been only equipment based support and no troops will be deployed. However India stood away from any help to either country letting the actions take their cause. On the other hand PM Modi also had a conversion with Putin to end this battle and to reinstate peace among the countries. Putin also agrees to the situation and the Russian government had been ready to lay off weapons and talk only if Ukraine stopped expanding its military equipment assistance.

Russia exports crude to major countries in the world. India is among the world’s third largest importer of crude. However the trade with Russia is just 1.4% of the entire imports. Hence no major complications will be visible if the imports from Russia are put off for a while. However the prices of Crude have been rising every day. This has caused a major tension for the Indian government. Of Course the Electric Vehicle is setting foot in the Indian domain. However its acceptance will take time and till the Indian has to depend on imports for Crude oil.

India expects Peace from both countries. It was also the message passed on from the PMO to both the countries at the end.