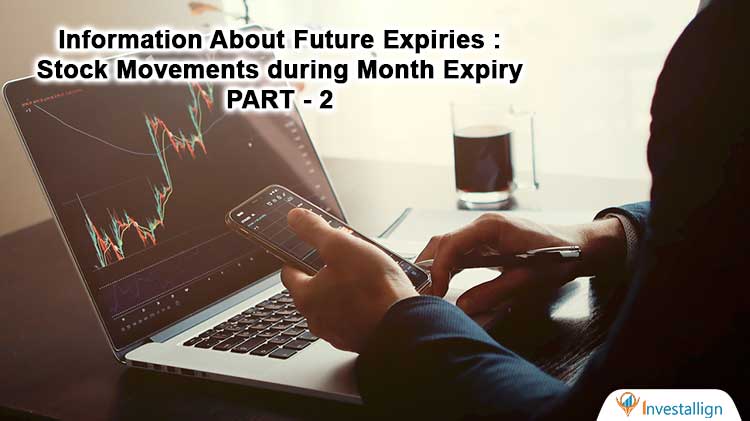 Futures contract in detailed terms means to buy or sell a traded security in the open market at a predetermined amount for a specified time frame in future. In layman terms, we can say it is a long term contract. These things were noted in FUTURE EXPIRIES PART 1. Along with this there were details regarding Lot Size, Margins, Buying & Selling and Expiries. With this knowledge it is crucial to know what stock movements happen around the expiries. It’s always a question as to which signals during the expiry should one take into consideration and what shouldn’t ? The future expires are the best times for performing intraday trades and scalp trades.

The reason is the extreme volatility in the pricing of stocks. Along with this the investors should never worry about the price movements during this time. The reason is the movements and volatility is temporary due to people shifting in positions. People constantly transfer their positions from Futures of one month towards Futures of next month. This is also known as expiry of one month and new position creation in another month’s Futures.

For example on 24th June, 2021 (Thursday), Futures of all the stocks trading under the name June FUT would have expired. So people would have created new positions under the July FUT. Such Position change is made in larger volumes by all the holders given their position conversion. Hence never judge a stock price movement based on the future expiry week.

There are various instances of NIFTY50 swinging 250 to 300 Points every day during the expiries. If we have a close look on this month’s expiry week as well we would notice the same things. Nifty50 was trailing at a robust gain of 15850 and it went drilling down to 15450 and then again came back to the same position post the expiry day. Hence there is a high fluctuation.

There are various checkpoints that need to be kept in mind around the expiries. The first one is the expiry following the quarter end and result announcements. Another checkpoint is AGM or Positive news during the expiry week. These factors play a major role in deciding the flow of stock prices.

The first checkpoint is obvious itself. The result announcements and the stock price increase or decrease in its accordance is definitely due to people exiting positions for their goals set. Always remember no investor ever takes up Future calls. The futures are only done by the traders and scalpers. These people have low liquidity to invest in single stock and hence they prefer trading on margins. Once their goal price is achieved they immediately square off the positions. So never invest into stock futures.

The second checkpoint is a recent example of Reliance industries. The AGM announcements made during the expiries backfired the RIL. The result is a loss of 1.3 Lakh Crore Rs. in valuation over the past 2 trading sessions. Thus the companies should always be cautioned regarding any announcements during this period. One of the major reasons for such a price fall could be people not renewing their contracts. Though Reliance had great news regarding the ARAMCO deal it suffered major market cap loss and value degradation.

As we all know there are certain price lines for every stock. This consists of the resistance and support levels. People have large amounts of contracts outstanding on these levels. So the basic understanding that one should have during this period is not to put any limit bound trades as all the limits would get hit due to the fluctuations. The traders should be trading on instant price changes. Every level that is set gets broken or there is a very high probability of the price touching those levels and coming back.

The lows and highs are bound to be new. The simple reason is the market behaves on the demand and supply balance. This means that more volume fluctuation will make the prices fluctuate a lot. However one should be careful if the prices break a very strong resistance or support level.

For example :- This week if we look at the SGX Nifty chart the price level which was very prominent was 15640 Rs. This level did not break for a long time. Hence it is a very strong support level. The day when the Adani Scam came out, post that the SGX Nifty broke the level and came back to its median price level. In cases of such a strong breakout, one should leave the positions once the price comes back to the median level. The simple reason is OVER RISK in those situations.

Given the Expiry week coming near, the Nifty broke down to 15450 Levels in the next 2 trading sessions. Hence getting a major crack in prices. However based on the expiry movements it came back to 15860 Levels. Hence price movements are very important to watch out for and also keep an eye on the support and resistance levels.