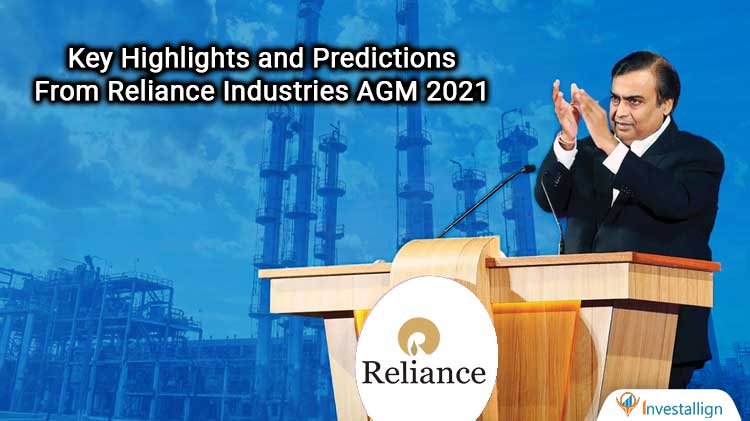 Reliance is the elephant of Dalal Street. It not only has the biggest market capitalisation but also has a solid impact on the market movements. Given its dominance in SENSEX by percentage Reliance has the capacity to drive the markets into either direction. The recent AGM was 44th among the series of AGMs and had 5 main pillars of announcements pertaining to the Oil business, telecom segment, retail sector and green energy segment. Reliance promised a 3 times growth of its many businesses in the upcoming years and also made it official statement that it would be a zero carbon company by 2035. These are great news given the business size of Reliance industries.

The AGM hit the company very badly. In the past 2 days it has lost almost 1.3 lakh crore Rs in market capitalization. This has been a result of 6 to 8 % decline in share valuation. The company had great vision for the future, but somehow the stock pricing took a nosedive.

The company had given out some key visions for the future and partnerships for expansion. Reliance also stressed on green energy and becoming a zero carbon company. The 5G segment is always in the eyes of Reliance and it has made announcements based on them as well.

Reliance has made it official that Saudi ARAMCO will crack a deal with the company to buy a 20% stake in the oil business for 15 billion dollars. This would not only provide superb liquidity to the company but also open Reliance’s path into the international business. The rise of Reliance in the Oil business will be marked with this deal. However the deal was also on table 2 years before. In the end it did not go through given the pandemic situation and oil price fluctuations.

But now the deal is made final. The chairman of ARAMCO would also join Reliance as an independent director. This shows the sights of a finalised deal between the world’s largest Oil Exporter and Reliance. All that is left now is to get Government’s regulatory approval.

Mukesh Ambani mentioned the launch of the cheapest and most affordable smartphone across the globe. This would be done in collaboration with Goggle. The company has made it clear that the product would be a benchmark in its segment. It has all the features of a smartphone with added google assistant features. It also contains a great camera quality and will be very useful for people with a low budget of buying smartphones. At the end Ambani mentioned that the phone will be primarily launched in India to get an idea about the response and then further exporting or overseas sales would be carried on.

Reliance has completed all its preparations for 5G technology. It has always been a goal for the company to provide India with 5G infrastructure and to eradicate the 2G technology. With the end of the preparation stage and getting all the approvals from the government, the testing phase will be initiated. The company will soon launch its 5G services and wants to be the pioneer for providing such services in India. The entire infrastructure for providing this facility is indigenous. The entire project is MADE IN INDIA and trial spectrum for 5G fields would initiate soon.

Reliance is very keen to initiate the construction of its green energy plant in Jamnagar. The location is very close to the company given the history of energy business beginning in Jamnagar. The company will invest close to 10 Billion dollars for clean energy and become a zero carbon company by 2035. The project6 at Jamnagar would cost roughly 60000 Crore Rs. This includes 4 Giga projects. The facility would produce energy storage batteries, green hydrogen and fuel cells.

The company also wants to get into the green energy business so it is planning to build a solar power plant of 100 Gigawatts capacity by 2030. This would be close to 75000 Crore Rs of Investments. Entire project is getting shape in the Jamnagar region.

As we know that Reliance is under constant pressure from Amazon for its Future Retail deal. The company has its appeals going on in the courts and is awaiting for the clearance on the deal. Apart from this Reliance is trying to run its retail system with Whatsapp for digital expansion of its business. Ambani said that the retail segment would provide 3 times returns in the next 5 years. The retail arm of the company is constantly diversifying and extending. This would not only lead to revenue generation for the company but also create more than 12 Lakh jobs over the entire time span. As of this year as well Reliance retail has successfully been able to generate more than 60000 Jobs.

The next goal in retail business is to improve the sourcing and locations of stores, increase the warehousing facilities, develop the logistics channel, expand and acquire businesses. Thus the retail sector is planning to get bigger in the next 5 years.