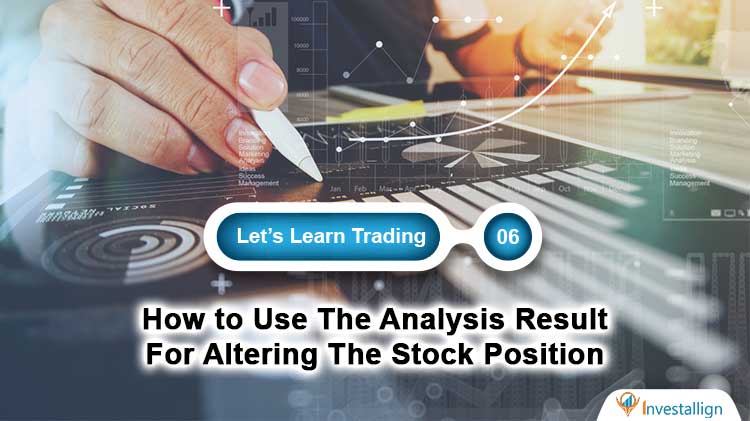 The company movement is based on the demand and supply of that particular share. This in turn depends on the company actions and its financial results and future plans. This means that whenever the company rolls out some news the share price starts acting on it. Let’s focus on various results and their actions to have a better view on the stock positions to act on.

The specific points to look at in technical analysis are :

Whenever there are positive and negative news pertaining to a company the stock movement shows the reactions of it. In Technical analysis one does not need to worry about 2 – 3 day holding and stock run as the position is squared off at the end of day. Hence when the news kicks in from the company to the registrar one should act on it. Do you know that any news that becomes public is a few hours late. The company submits the reports to the registrar of companies and from there it becomes public. Before that the information was public knowledge only but the mode of transportation is multifold in such cases.

Hence to act on it there are premium accounts available with bloomberg and other news companies. Here the knowledge can be obtained within a few minutes of registrar submission and hence one can act on such news before others.

Traders often short the top gainer at the end of the day to take opportunity of minor correction on the following day. Similarly they buy the highest losers so that the minor gains can result in profits. This is a very common practise which is followed by most of the trading community.

MACD is an indication of stock movements above and below the average range. Hence this indicates the change in share movements. Hence once the share is above that average index one can buy for a few times until the trend gets derailed and vice versa. Stochastic is an indication of buying and selling volume at a particular time in the stock. This gives us an idea about the point when the buyers are dominating and when the sellers are dominating. Such indicators are used in major position actions in algo or automated trading.

The silent and important observation point is Nifty and Bank Nifty. They indicate the marker direction and hence one can take advantage of the movements around the resistance and support levels. This is very common knowledge and most of all traders take buying and selling positions based on the Nifty and Bank Nifty Levels.

It is important to watch for the sectoral movements of the shares. If three or more shares in the same sector have started outperforming one can bet on the next reliable share and gain the opportunity. Similarly such observations become important to take decisions for intraday SL based positions. If one sector is performing well on a single day then taking multiple positions in one sector can be beneficial.

If a person is a trader then these particular time positions should be locked in his or her observation. The points are opening market (9:15 TO 9:45), Global markets pre-opening and opening time (12:30 – 1:45) and Closing ell (3:00 – 3:30). Around this time frame the stock movement is maximum. This can give better opportunities for profits based on volatility. At the end traders even short the highest gainers to get benefits of intraday profit bookings.

The specific points to look at in fundamental analysis are :

The highest peak point for a long term position is quarterly results. They present the investors the current position of the firm. This helps to know the future vision of the company. The company presents its expansion plans or updates on legal actions against the company. Hence it helps the investors to decide whether to keep investing in the company or diversify the positions.

There are various credible brokerage firms who present information regarding future targets of the companies. Most of their predictions are long term based and they are having variation of approximately 2% from the given targets. So following their targets and research could provide profitable gains. One such famous firm is Motilal Oswal. They provide the best targets and daily updates through their Social media handles like Instagram.

Subsidiary Based News and Company Patents or Pending Project

The companies often have multiple subsidiaries which provide the real picture of the company’s position. Hence investors should keep a watch on such companies. This provides a window to look into the company’s financials and other statements. It also connects with the company’s vision.

It is also a common observation to view the future projects of the firm or pending patent approvals. These are some major analytic points which provide a picture of the company’s future.

One such company in Nifty50 is Granules India Limited which has a very strong company background and numerous patents. One other company with more than 100 pending patents is Dr. Reddy’s Labs. Both progressed almost 50% in valuation in the previous year.

Better future prospects and patents show buying vision given the company’s potential. Sometimes such vision is not supported by financials and hence loans are taken against the expansion projects. So to make better investments one should always check the feasibility of the company’s statements and its vision.