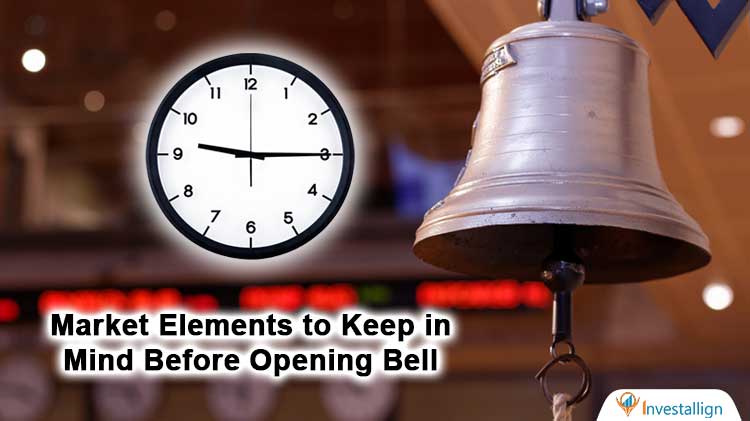 Markets are not easy and predictable as they seem. One has to be smart and quick for earning profits. To identify the opportunities it is important to keep an eye on daily updates of the market. With proper knowledge one can place a good proportion of profitable trades. For a continuous evaluation of the market situation one should follow certain factors. They provide information about the past and future predictions can be based on it. The most used ones are :-

SGX Nifty is a duplicate version of NIFTY50 which works for a major part of the day. One can trade in it based on future and monthly expiry. It displayed the prices from 6:30 A.M. in the morning. Hence one can know about the probable price of NIFTY50 before the market opens. This also helps people to track the congestion NIFTY50 based on the change in US markets that opens in late evening based on IST. Hence this is the most important factor one should observe before the market opens. It helps to make a strategy for the entire day in advance.

VIX is the index presenting the volatility levels in the Indian Markets. It presents the figures of the day before. The more volatility tends show that the price fluctuations will be constant which is a good sign for the traders. The VIX is a useful measure for determining the market sentiments. One interesting fact is that it is a trademark index.

The US markets dominate the entire world. The US indices are one of the most traded and referred indices. The reason is their dominance in terms of industrial output and production. They present maximum cash inflows across the world. The US markets present a vivid picture of the world economy and one can refer to it for future market direction. Also for a trader it is important to note the DOW Jones movements. The reason is DOW movements have effects on NIFTY50.

The Asian markets referring to HONG KONG, KOREA, JAPAN and CHINA open before the NIFTY50 opens. The NIFTY 50 is generally parallel to the HANG SENG index. This means that the direction of HANG SENG Index gives a probable opening ratio of Indian indices as well. So coming the SGX NIFTY and HANG SENG one can be sure about the probable opening rates for the Indian Indices.

F&O updates include the information related to probable bans on certain stocks from F&O trading. This also includes the traded value of F&O in one particular session. The F&O figures are indicators of what the traders think of the market. This gives a tentative idea about the predicted market flows. The major F&O contracts lie around the resistance and support levels of the indices and stocks. This is the reason why there is drastic change in the stock price or index price when the support or resistance levels are crossed.

FII and DII are the pillars of the entire Indian Markets. More buying from FII presents a positive way ahead for the markets. Similarly there are few patterns which give an alarm for the traders. If DII and FII both show positive figures of buying this indicates a major upscale for markets. When the FII are selling and DII are buying the markets are said to go down for corrections. But when the FII and DII both are selling stocks heavily for consecutive sessions one should exit the positions temporarily. This May result in a sharp fall and crash in markets. This pattern was observed near the March Crash before the LOCKDOWN news.

The resistance and support levels are a very important measure to place the SL and profit booking levels. This indicates the market potential for one single session. If the market crosses these levels it can result in major upscale or downfall depending on the level. So if the support levels break this results into major bloodbath in the markets and vice versa with resistance levels. The Bank Nifty consists of major parts in the NIFTY50, so a major break in Bank Nifty also presents a change in NIFTY50.

So the proportion of sectors in NIFTY50 should be kept in mind as well along with knowing the support and resistance levels.

Market information related to earnings or other share split and company updates is a prime window for stock and sector specific investments. Hence one should be focused on any news update on the sector he or she is invested into. Open interest and build up of stocks for the previous day indicate the positioning of traders into various stocks. Similarly the Short covering and Short position stocks of the previous day show the next target of bears in the market.

There would be numerous updates like economic and global tensions, expert and trade numbers, factory outputs etc. which also determine a long term direction of the market.