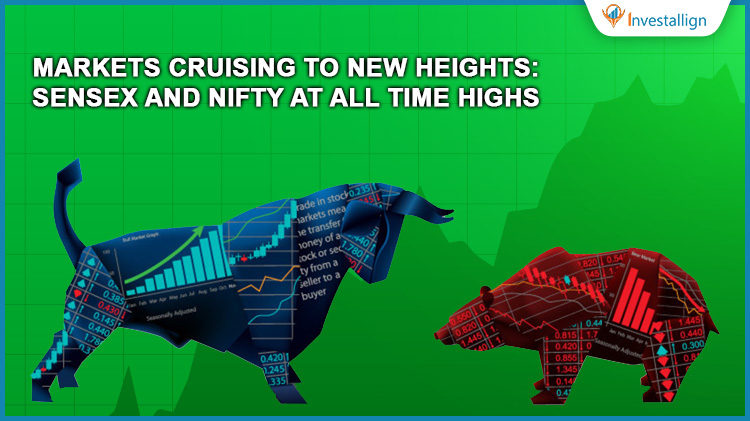 The markets have been on a rise since the beginning of the U.S. elections and the rally is expected to lead forward. The new highs have been noticed when Joe Biden is set to take the pledge for becoming the 46th U.S. president and the vote counting of Bihar is to be done from 10th November onwards. Sensex is seen at all-time high of 42645.33 and Nifty is seen at all-time high of 12474.05.

The banking stocks are seen to be the major stocks pulling this whole bull run ahead as bank nifty is seen to be rising from levels of 23000-27000 in less than 1.5 months and simultaneously HDFC bank, IndusInd bank, Axis bank and ICICI bank are seen to be major gainers from that segment. Also one cannot forget the Share by cement stocks namely Ultratech cement, FMCG major HUL and pharma giants such as Divi’s labs and Dr. Reddy’s Labs. The technology sector has also made significant progress and the results of the same are noticed in Infosys, Tech Mahindra and TCS. All these stocks have increased by almost 20% from their 52 week lows. Whereas the upside for the automobile sector is seen in Tata motors which is almost 40% up from 52 week low. Also no one can forget the three fold growth of Reliance Industries. Overall there has been a unanimous sectoral growth and not centralised.

FPI has circulated almost 15000 crore Rs. during October month and it shows the amount of confidence the world has on growth of Indian Economy. Also the number of D-mat accounts have increased by 25% due to lockdown situations. Indian markets are forecasted to have a huge amount of potential as the newly elected president is likely to continue the China tariff war. Also one of his core decisions include improving USA.’s position with Iran which would indirectly benefit India. The startup initiatives by the P.M would boost up the employment rate and also give rise to demand of local products.