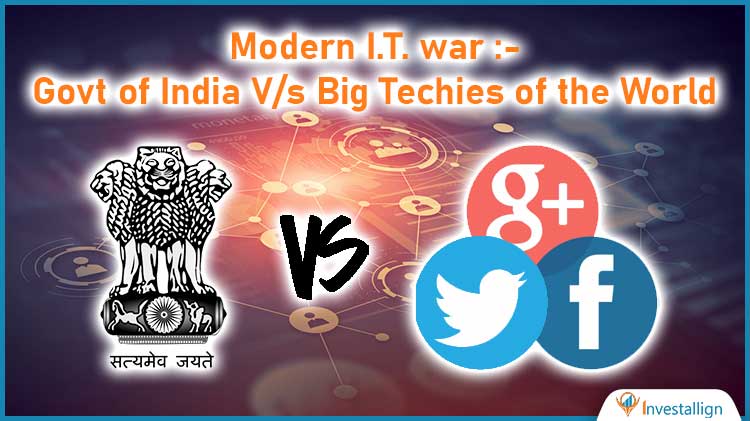 RIGHT TO PRIVACY is referred very frequently word the issue is related to Social media. The social media platforms believe in letting people express what they want without any restrictions. The social media websites also want to ensure peace with the Govt.’s new I.T. amendments are becoming a real headache for the social media platforms. The major ones at target are Twitter, Facebook, Whatsapp and Google. These are the sites where anyone can express anything without any restrictions. This is the basic motto before the companies started their functioning. But with the new I.T. rule Govt. wants these companies to take the responsibility of every content posted on their handles. This is done by making a special amendment to appoint a Chief operating officer for content posted and its review. Let’s discuss the triangular view of this change from government, companies and Common man’s point of view.

Government’s Emphasis on the New Rule

In the last 2 years there has been a lot of violent movement across India. This includes the Jamia College incident along with the Farmer’s Protest incident. This also includes fake news of vaccines or lockdowns or some fake videos about important information. Thus such information on social media is misleading and can result in violence across the country. This also includes the fact that such information can be used against the national security of the country. Hence the government wants these firms to step up and take the responsibility to remove all such content related to violence and other disturbing actions. This could decrease the number of people joining such movements and also put brakes on mob lynching incidents. Such facts and information could also lead to deteriorating the government’s image in the minds of people.

The main reason for adding a filter to such content is all such information is one sided and speechless. Anyone could say anything without displaying any facts and people tend to believe such things as well. Also the government cannot go personally to every opponent’s house and explain to them the procedure and actions. Hence such one sided information which is beneficial to only a few should be stopped.

All the applications have opposed this decision in their own way. The main point is the right to privacy. The social media platforms provide their users the right to express anything they want. The information that the government is referring to is any person’s view regarding an ongoing situation. They can not stop the person from posturing what’s actually the fact about one situation. The companies also said that they cannot get into the chat history of people or their group (Whatsapp) or dig into their social media handles to remove and filter the information posted by them . This will result in violation of their privacy and this could ruin the entire business model of such social media platforms.

For companies such as Whatsapp the main key to success is their end to end encryption model. This enables the users to chat with the other people privately without the fear of their chat getting leaked. Hence the main issue of Right to Privacy is the triggering point to this situation along with the hindrance of the Right to Express in a democratic nation.

Common People’s Viewpoint on The Situation

Neither the government nor the Social media companies are completely right. There is no middle ground on this issue that has been raised by both the entities. The reason why companies should focus on such a law is that one officer could eradicate the entire misleading chain of information. It could save a lot of people’s lives in case of riots and other violent activities. It can also save the government from additional work of suppressing the violent activists. In the recent scenarios of Jamia College and Farmers protest, social media handles were supporters to display the actual situation but they were also one of the pioneers to let the situation get worse. Hence a filter is definitely required.

When we talk about the wrongful acts performed by the government this year, the list is long. The vaccination scam, Medical essential’s black marketing and hoarding, Lack of oxygen supplies, lack of infrastructure to tackle the situation, Improper planning for economic well being and many serious accusations regarding the fund usage and more. Hence it is necessary to ensure that the information that is filtered out is done independently & without any pressure. The reason is in future there are high chances that the government can pressure its way on such companies to remove some bad news about their MLAs or any person in power. The government can also ask the companies to remove information about their failures and this could result in blockage of information flow.

Hence an independent filter is required to analyze the content and remove the actual fake and misleading information.

Until now only KOO has adhered to the law. All the other handles haven’t progressed ahead with it. Whatsapp has even sued the Government of India in such regards and many petitions are filed by other social media platforms in different high courts of India. Hence the war is going to drag on for a long time and it is now in the hands of courts to provide a middle way to such a situation.