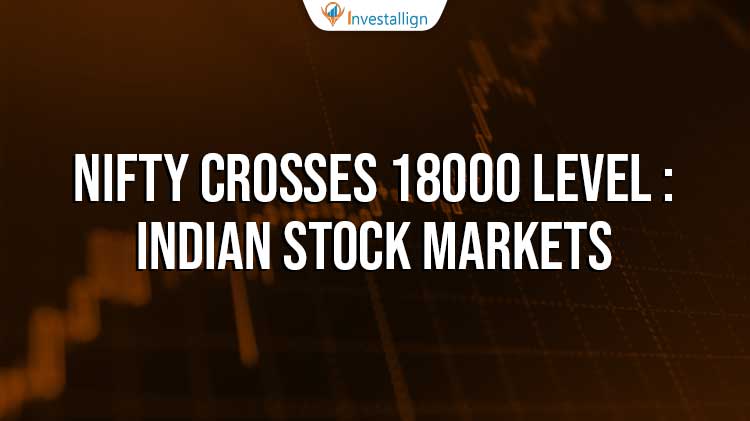 Nifty50 is currently moving ahead towards breaking the all time high of 18600 level. The major reason behind the same is the banking support and the Indian companies showing stable growth in the previous quarter results. The Indian stock market showed last closing at 18202 points. In the last session the markets showed a positive gain of 85 points. On the other hand the Bank Nifty was up by 428 points or 1%. The major stocks like Reliance, SBI Bank, ICICI Bank etc. are in movement and rendering stellar gains to the Indian Indices.

The year 2022 began with the Nifty50 level of 17600. The markets were looking positive and everyone was bullish on the Nifty50 and the bank Nifty. This also rendered a positive run for the Nifty50 to 18300 levels. However after sometime the Russian invasion of Ukraine posted a major setback for the Indian markets. The after effects of the war forced Nifty50 to go down to 15300 levels. The high of 18300 on Jan 17, 2022 was the last time the Nifty50 touched the 18300 levels for the year 2022. With the war situation breaking out the markets went down to 15850 in the beginning of the March month. However the stocks support and good results posted a good gain again for the Nifty50 and it was lifted up to 17670 points within one month.

However the after effects of war posted a sudden inflation rise and on 17th June, 2022 the markets touched the 15300 levels. Not only the Indian markets were trailing down but the global markets were also witnessing a sell off. Hence there was a global sell off and the FII and DII both feared a strong bearish market due to chances of recession.

After that there were many economies that faced recession or were under a huge financial burden like the United Kingdom. The sudden fall of a strong and stable economy again triggered a caution in the market. This made the traders and investors slow down their investments in the markets. Hence the Nifty became very slow and steady on its growth. This can be seen in the market recovery as the Index took almost 4 months to go above the 18200 levels again.

SGX Nifty is another form of Nifty50 which runs for most part of the day. The index represents the Indian Index for the FII who have their markets opening post the IST market timings. It is based in Singapore and hence known as Singapore Exchange Nifty.

On one side everyone is expecting the Nifty50 to cross the all time high again. However on the other hand everyone is cautious about the Bank Nifty movement. The reason behind the same is the markets are already boosted on account of Bank Nifty gains. Also the analysts are not co considering the Bank Nifty to cross the 43000 to 45000 levels in a short term. It may take some more time than expected due to the overall global situation of the banking market.

The recent targets show a great Support for Bank Nifty placed at 41300 levels. Also a huge resistance is placed at 41650 levels. Hence if the index crosses the 41650 levels one can expect a further run in it.

The performance of the Indian stocks is not best in all the segments. The power segment, port segment, banking segment and infrastructure segment are booming. However on the other hand the technology segment is reeling from a series of high devaluations. The reason is the global markets not showing support to the technology giants of India. However on the other hand the foreign currencies are suffering which is affecting the profitability of the Indian tech companies. Also the petroleum companies are not showing rapid gains and the steel sector is stagnant in its own zone due to the government policies.

Hence the overall markets are seen as bullish. Also the SGX Nifty shows a positive trend for future sessions. Hence one can hope that if the current trends continue the markets would witness a new all time high of Nifty50 by the end of this year.