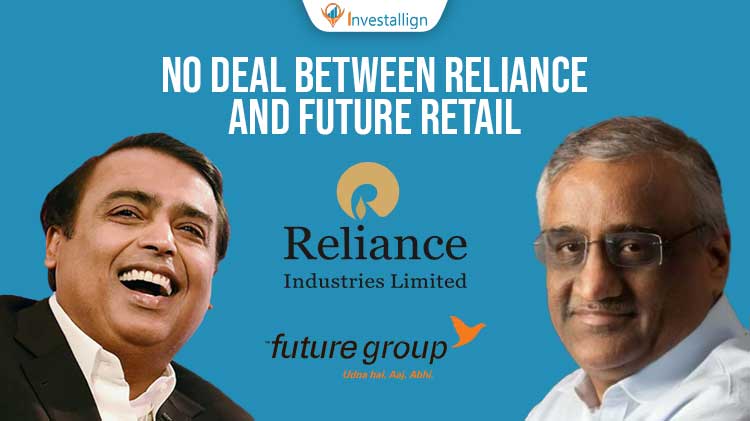 Future Retail and Reliance signed an agreement for sale of 19 companies under Future Retail to Reliance Group. The deal amounted to across 24713 Crore Rs. However after the deal was signed there have been multiple obstacles one by one coming in its way. The major one was Amazon’s blockage in the deal going through. Post that the Reliance group was finally trying to get the deal through after a single entity conversion of 19 companies. But in the final voting the secured creditors opposed the plan. The 75% mandatory approval cannot be met and this led to a denial in the deal. The 20 month old deal was broken and now Reliance and Future have parted their ways from the proposed agreement.

Future Retail was a major game changer in the eyes of reliance group as its JIOMART chain is constantly expanding. The company was planning to add style to its Reliance Retail business and expand its reach through the 1500 stores network created by Future Retail. The opposition was generated from the secured creditors of Future Retail. This company operates the major brands of Future group namely Big Bazaar and Easyday Stores. The JIOMART business is already creating a buzz and with collaboration of Whatsapp, Reliance was trying to change the entire retail shopping game by taking it to another level. It was emphasizing to compete with Amazon which led to the battle between two companies over the takeover.

Under the deal offered by Future Retail, the warehousing, logistics, wholesale and retail business was going to be under the hold of Reliance Industries. The reason behind Reliance taking over a stressed entity was the market potential. The retail business in India is close to 883 Billion dollars and is expected to grow to 1.3 Trillion dollar market by 2024. Also the dominant segment is going to be groceries. Thus the retail stores were going to be utilised for JIO MART expansion as its core is grocery selling only.

In this deal the first major obstacle was Amazon. The company invested 1500 Crore Rs. in Future coupons in 2019. This company is the promoter group of Future Retail. Thus Amazon gained an indirect 4.8% stake in Future Retail. After this deal Amazon also bought More with collaboration of Samara Private Equity firm from Aditya Birla Group.

Thus through this one can be sure that Amazon is trying to penetrate through the retail business of the Indian domain. However with this deal the retail king of India Kishore Biyani was tossing the entire retail empire to Reliance Industries. If the deal had gone through it would have disrupted the entire dream of Amazon and Indian Retail Business.

Thus it opposed the deal of Reliance and Future under the 49% stake acquiring of Future coupon deal. Amazon also stated that its agreement with Future Retail forbids the sale of Future Retail to Reliance Industries. It succeeded in the same case as the case which was registered in Singapore Arbitration court was won by Amazon. The court stopped the deal and moved the decision in favour of Amazon.

In the final moments Reliance proposed to club the 19 companies of Future Group under one name, Future Enterprise Limited. This means that Future Group would be now selling one company to Reliance Industries. In the voting procedure for the same the unsecured credit passed the motion with a 62% majority.

Similarly the shareholders passed the same with 99.99% majority. However the secured creditors did not agree to the deal. They denied the deal with a majority of 99.97%. This resulted in no deal. Thus the mandatory 75% criteria for passing the deal was not met. Every entity of Future group except Future Supply Chain Solutions Limited failed to meet the requirements.

Through the entire dispute there came a time when Future Group was unable to pay the rent and thus Reliance saw the advantage and took control of 947 Future Group stores. This meant that Reliance transferred all the leases to itself and took over these stores. The stores include 112 Central and Brand Factory outlets. Reliance started sending its own staff and managing the sites by itself. However Amazon is opposing the same, but on the other end Reliance has already started running the stores on its own.

Future Group’s Kishore Biyani stated that he will get back the stores from Reliance Industries. But this directly meant that Reliance Industries bet the Future Group and Amazon together in a power tussle. On the other hand Reliance also blocked Amazon from advancing in its offline business venture in India. The reason is Future’s assets were tied up for 2 years in this tussle. This created a direct value erosion which would be a drastic set back for Amazon from its goals for Indian Retail Business.