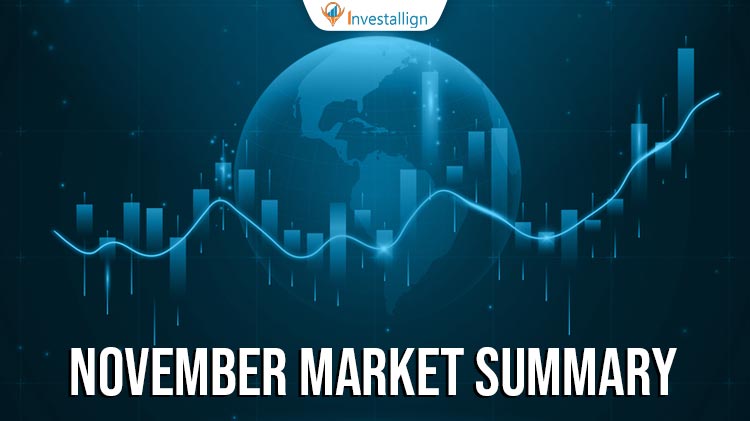 Indian markets have been witnessing a dream run since the month of November began. The NIfty50 and Bank Nifty have shown tremendous gains. The Sensex has been crossing the all time highs and the markets have witnessed the grip of bulls coming on. The big news is the Indian markets are being driven by all the segments together and hence there is nothing like a Reliance show or Banking sector show anymore. This suggests a positive sign as the investors can be confident about their investments and a major sell off is not triggered even at such high valuation of the indices.

The Nifty50 has posted a whopping gain of 800 points in the month of November. The index initiated its journey around 18100 levels and has concluded the same around 18900 levels. This has made the investors average their investments even at a higher price and given good returns to those who have waited for such a run since the fall towards the 16000 range.

The Nifty50 gave a return of 4.5% approximately in the month of November itself and this was possible because of the contribution of all the segments. However the major contribution comes in from the Banking segment, Technology segment and FMCG segment. The banking segment has witnessed a huge gain of 2000 points in one single month.

The Bank Nifty index has shown a rise from 41200 levels to 43200 levels in the last close. The index has given a gain of almost 5% in the last month itself. This means that the interest rate hikes are finally showing their effects and the segment is back in business. However though the rates have hiked one can notice a strong increase in the loan disbursement figures shown by the banks in the quarterly results. Currently the Bank Nifty and Nifty50 are serving their all time highs and this scenario can be seen as one of the best eyesight any investor would want before the year 2022 ends. In other words the target set by us in the previous blogs of Nifty50 to reach 18600 and even cross the same has been achieved before the year 2022 concludes.

Sensex on the other hand has been in a rocking spot. It has crossed the 63000 mark and the analysts are predicting that the index may soon see the 90000 mark getting crossed by 2023. This means that the Nifty50 and Bank Nifty would be posting huge gains in the upcoming year as well. One of the major reasons behind the same is the Indian economy not kneeling before recession. The government’s planning to fight recession was successful and the statement was passed months before that whatever happens the Indian economy won’t be facing recession and this is the reason why people are trusting the Indian economy over the world.

The SGX Nifty currently showed a 19000 plus price point for the index. This means that the markets would be heading towards the 19000 and above mark for the sessions coming forward. However one should now be steady with increasing their portfolio valuation through bluechip and focus more on the Midcaps or the Small caps which have been under pressure for better returns.

The major role for the Indian markets will be played by the technology sector in the upcoming time. The reason behind the same is their dented valuation and the scope for the further rise. The major stocks of Technology segment like TCS or Wipro or Infosys have been suffering a huge value loss due to recession across the world or bad economic situations. This has impacted their revenue and earnings all together.

However one has to notice that these stocks are just having a temporary turmoil in valuation and soon the situation gets a bit better the major jump in their valuation would be noticed. For instance if we take TCS shares then the same posted a returns of 11% in the month of November. This is fantastic returns given the dented valuation of the company. Also the 52 week high of the company is 4043 Rs which means there is still space of 600 Rs. upside in the same.

Also for another instance one can consider Wipro being the prime share for investment by any investors. The reason behind the same is Wipro is currently trailing at 413 Rs per share. However the 52 week high for the share is 726 Rs. This means a space of 300 Rs for a 413 Rs. share. In other words the gains can be capped at 75% and more if the economy around the world shows support for the same. Hence the best sector to look towards would be the technology segment in the Indian markets for the further investment point of view.