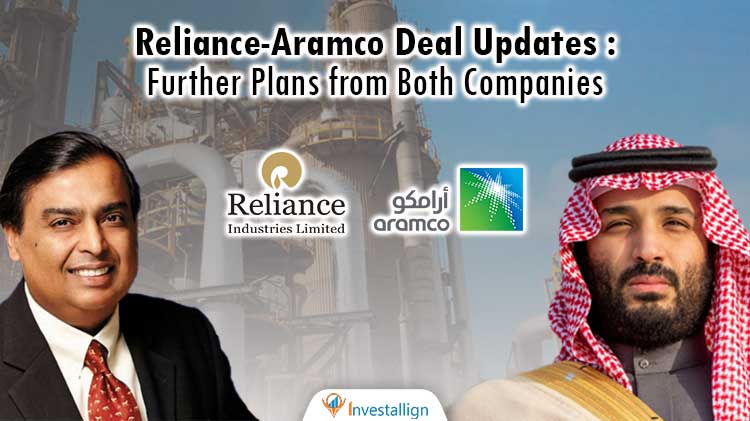 Reliance and Aramco recently came into a deal for 15 Billion Dollars. This amount was equivalent to 20% stake into the debt free Reliance Industries. The company’s stocks have skyrocketed since then. The company went to touch an all time high of 2751 Rs from a 52W low of 1830 Rs. Reliance shares have been in focus since the last 2 months. The reason is the bull rally driven by the stock. The company has always been the market mover given its tremendous market cap.

Recently the mammoth has acquired multiple companies to grow its reach in digital and retail business. The company has funded multiple online companies and also taken majority stakes in companies that sell online. Some of them are Urban Ladder, Netmeds etc. It has also enhanced its retail portfolio through Seven Eleven, Hamleys etc. The company has started believing in green energy being the future of business activity. Hence it has also invested into green energy with a promise to generate 100 GW of green energy by the end of this decade.

The future Retail deal is one of the biggest deals Reliance has taken over in retail business. To Expand its reach above JIO MART the company had cracked the deal. However due to the intervention from Amazon the deal cannot be closed till date. Thus it is one of the deals in line for future time.

Among all such deals the Aramco deal was a big breakthrough as it was to generate wealth in abundance for the company. The 20% stake sale in Oil to Chemical business was to bring in excess money for rapid expansion plans. The current situation for the Reliance Industries is a bit critical whatsoever.

Currently the reason sighted by Aramco is the revaluation of Reliance’s Oil to Chemical business. The company believes that in the future it would be less of carbon emissions and fossil fuels and more of Green energy. Currently Reliance is also proposing the same thing to the world. In such a situation Aramco pulled off its non-binding agreement made in 2019 for a 15 billion dollar deal for 20% stake. This gave a huge shock to the Reliance industries. The company sunk heavily in valuations and also made a lot of records for the world.

While the Deal went down the shares of Reliance Industries were thanked heavily and lost valuations close to 8% in 2 consecutive sessions. This gave a major valuation degradation in Mukesh Ambani’s net worth. Due to this it was the first time in history that Mukesh Ambani lost his richest Indian title to Gautam Adani. Yes Gautam Adani became the Richest Indian and even the richest man in Asia. Hence the Ara co deal gave major socks to the Ambani’s and reliance Industries investors as well.

However the loss was just for a minor time frame. Reliance share price rocketed by 5.5% on 25th November giving the Richest Title back to Mukesh Ambani. The shares made a strong impact on Nifty and Sensex and ended the losing streak of the markets. This not only pulled back the market from downfall but also changed the momentum and direction of the market. Thus the markets came back on track with this tragic increase in valuations.

Further plans from Both the Companies

Reliance continues to believe its valuations of 75 billion dollars. However the companies were citing different investment banks for valuation. This has been the reason for the end of the day;. Aramco Believed that with the future times to come the oil business will notice a downfall and as per the consultants the evaluation will degrade by 10%. Thus the deal would result in a big loss for the Aramco Group.

However with the end of the deal both the companies have said to continue being allies to each other for any further course of business. Reliance has been trying to make its chemical sunless grow multifold with the time to come. It is expected that the chemical business would double in size in the next 5 years and hence Reliance has started to look into that field as well. It has already invested into UAE’s TAZIZ joint chemical venture. The amount of investments is around  2 billion dollars. Thus further plans for Reliance are set up. It wants to expand the chemical business and grow the green energy business as much as possible.

Aramco on the other hand also plans to do things in the same regards. It aims to be net zero carbon emission company by 2050. It will focus more on hydrogen and other renewable sources of energy as the oil business is not always going to be sustainable in long run. Hence this suggests that the future of business is Green energy and people should look forward to invest into such ventures.