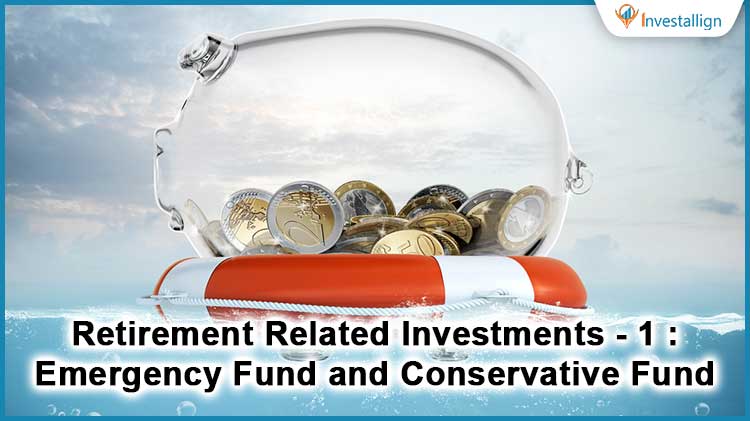 Retirement is the most wanted phenomenon for any working person. Early retirement is the wish of every person alive. In a financial way one can be said to be financially independent when his or her passive income flow is more than their active income flow. In other words, Money worlds for them in a better way then they work for obtaining money. As sweet as it sounds, early retirement is not easy. One needs to accumulate enough funds to determine a constant standard of living. Along with this they also need to plan out for emergencies or health expenses and manage the luxuries. All this by one saving named as retirement fund. Hence the funds have a lot of responsibilities attached with it. So let’s discuss ways how a person can invest this fund to assure constant wealth growth and stable income flow for the upcoming years of living.

The most important aspect that needs to be taken care of is the availability of funds in case of emergencies. No one knows when an emergency would arrive and what financial requirement is there. Hence some funds need to be kept aside as a collateral for the same. These funds are known as emergency funds. The emergency funds involve a liquid state of money. These funds are easily available like cash on hand. They have multiple forms among which the most prominent ones are :

Fixed deposits form a major part of the emergency fund given the rate of interest earned on the money. The FDs can be quashed at any movement and a stable rate would be applied to it at that time. In case of no emergency one has the opportunity to earn more interest on the money that is not going to be utilized for any risky investments.

The savings accounts offer a very low interest rate varying from 2.5% to 4% per annum. This rate is applicable every three months on the money in the account. Keeping money in savings accounts is a total mistake for the young guns as along with the inflation rate added, the stable interest earned in the account is of no use. If we take inflation at 7% then the rate applicable is 2.5% which can add up to 3.2% given the compounding rate of interest. Hence this makes a loss of close to 4% every year on the money put into savings accounts.

However for emergency purposes it is better to keep money invested there so as to earn some interest on it. It is a better option than cash on hand.

It is the most liquid mode and no hustle required for gathering money. In this scenario instant availability is possible at any time.

It is the safest asset to invest in. House valuation can go under, even the assets bought or stocks have certain risks associated with it. But Gold is the safest asset given its usage in maintaining the balance of the economy. Also it can be liquidated at any point of time. Given the nature of gold value appreciation over time, it can be always used as an investment option under the emergency fund category.

As suggested by the name, the fund managers under such schemes are very conservative on their modes of investment. They invest their major chunk of money under the debt market. The amount of the investment debt market varies from 75% to 90%. The Rest of money is either diverted to equities directly or is invested into equity based mutual funds. Hence these funds are the safest mode of investment which posses better chances for increase in wealth and better interest rates. These funds are also referred to as hybrid funds as they are a mixture of equity and debt.

The funds aim to give out returns which beat the inflation rates. Hence the value of money is intact when a person invests in them. Also they invest a major part of their funds into the debt market. Thus the money is very safe. On the other hand a fixed amount of money is received constantly in the form of interest. Hence it is like a paycheck system in an indirect form.

These funds charge a nominal fee for maintaining the portfolio of an individual. These funds being very frugal on their interests output should never be preferred by young people.

When a person plans for his or her retirement they consider the SWP as their major source of income from such funds. Hence the calculation of their full utilization is obvious. However one can always save a chunk and invest into equities. The reason is that such extra money is neither calculated in emergency funds nor is it going to be reinvested into conservative funds. Hence it can be diverted towards risky securities to get a better return on it.

Another plan is to invest them into equity based mutual funds. A person who has better savings for retirement can have the luxury to treat the entire SWP money as extra money. Hence the entire amount or a part of it can be directly linked to equities or an equity based mutual fund. By this way the extra money earned is reinvested into risk bearing securities with a possibility of getting better returns on investments. Such a process is referred to as STP or Systematic transfer plan.

Other instruments linked to Retirement Investments would be explained in its second part.