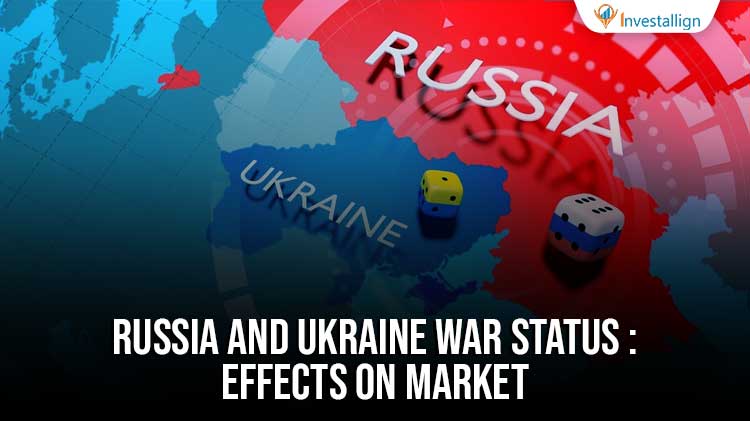 The Russia and Ukraine crisis have been the centre of the entire world in current times. Every market possible on the planet is reacting to the intense situation between both the countries. Alongside this major countries such as Japan, U.S.A and U.K. have got themselves involved in it. The reason behind multiple countries involved is the fear of the breakout of another world war. The entire phenomenon has resulted in the stoppage of market bull run. This has created a fear of a bloodbath and constant FII selling is getting applied.

What Started the Crisis ?

The situation is dated back to the years when the entire world got off the world war 2 situation. Since that time Russia and Ukraine have been sharing cultural and social values. However in 2014 when Ukraine elected a Pro-Russian president it resulted in its invasion. Putin attacked Ukraine and this broke all the cultural and social relations between the two countries. Ukraine has some rebel groups who are prone to join the NATO or European Union but Russia demands otherwise.

If Ukraine’s tie-up goes through, the Russian domain will be exposed towards the European Union and NATO and that will lead to constant war-like situations. Alongside Ukraine is playing its part and taking revenge for the 14000 Deaths resulted during the Attack in 2014. Russia wants to make Ukraine a neutralised country and hence demands its agreement for not tying knots with either NATO or the European Union.

Since Ukraine is actively trying to overrule Russia’s warning, President Putin ordered forces to get ready for invasion of Ukraine again. This has created fear and havoc at national levels. The reason is the fear of an initiation of third world war. If it begins then the war would consist of nuclear weapons as well which will lead no good to any countries whatsoever.

Actions By Other Nations

Every major nation is facing a crisis due to this situation. The effect is either in the form of market reactions or business loss. Hence the world is suffering due to Russia’s intentions for invading Ukraine.

The USA and UK have been trying to talk the Russian Government out of this move. The EU alongside the US has imposed restrictions and sanctions for trades with the Russian government to put pressure on the government indirectly. Also the Russian markets were 10% down due to an over-panic situation in the country. Hence the situation is getting intense day by day.

The Indian markets are under pressure from the bulls but the situation is not allowing the markets for a strong rebound. The entire scenario for the markets is completely volatile. The VIX has been seen jumping 16% on daily sessions. Even the FII has been selling which is leading to major value loss in the Indian economy. However the situation seems to be a strong assumption for quick market recovery if the situation turns out neutral.

Another reason for such a steep fall in Indian markets is the expiry date. The future expiry is a major question for the Indian traders to get into the market.

The markets are reacting directly to the Russian manoeuvre. Gold prices have been touching all time highs. This is the reason why people have been getting their money out of the markets. The effect on gold prices is an indication of people losing faith in markets and shifting towards safer and secured means of returns. In such a situation one should think to keep his investments and average them at every dip possible.

The reason behind such a philosophy is that markets are quickly getting a rebound if some news surfaces over the media. Thus bulls are eager for a higher market valuation. However the bears have control given the current circumstances.

Can there be a War ?

The answer to this question is possibly No. Every person has most of the reason to believe that Russia is soon going to invade Ukraine. However the chances of the same are less given the world unrest it would create. The world is sitting in the laps of peace since the end of the second world war. The Russian invasion can cause the United States to initiate its counter attack through Ukrainian provinces and trade policies. The initiation for the same has begun. The EU and USA have started sanctions on the Russian trade to weaken its motives.

Also Putin and Russia are already on the road of win-win. IF one can get a win without action then no war is required. The Putin government has got the attention of the world and has put forward their conditions. These can be taken into consideration and the US and EU have to believe in the same given the world’s situation. Currently the world just got over the COVID crisis and with a new war in place the people would lose faith in leaders and this can provoke global unrest as well. Hence a compromise is definitely visible in the near future.