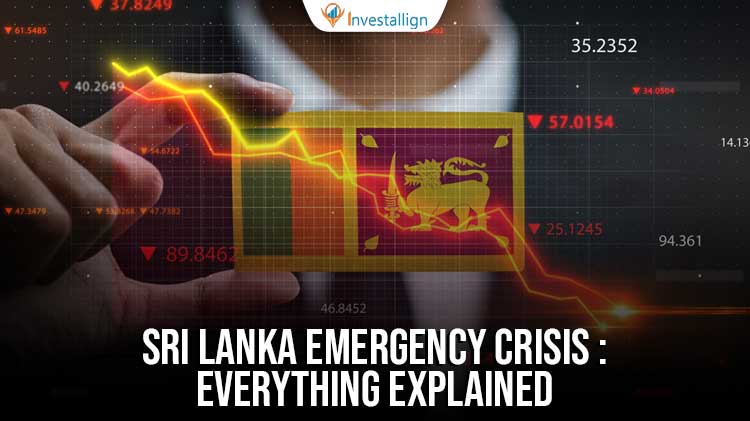 Sri Lanka is under an emergency situation currently. The entire nation is sacked under a huge amount of debt and it does not have enough resources to counter the problem. It has become a perfect example of a Two deficit economy. In other words the country’s required expenditure is more than its national income. On the other hand, its exports are much less than its imports. Thus the nation has lost its reserves and is falling under a huge debt crisis. Due to such a situation the country is now lacking essential goods and commodities to survive. This has not only created scarcity but forced the locals to come on streets and protest against the ruling party. The country is under a riot situation and an emergency has been called off from the centre.

Emergency was even declared in August due to the hoarding scenario of essential goods and commodities. The same situation has been repeated due to active protests from people against the police and government. Currently the situation is so bad that the country is facing 13 hrs of daily power cuts.

The reason behind the entire situation is a mere political failure. The ruling party and the previous party in power both cannot manage the funds in a wise manner leading to an international currency deficit. As per experts Sri Lanka needs to pay 4 Billion dollars as a part of its debt payments but only has 2.1 Billion dollars left in its purse to spend.

The major expenditures that are coming forward for the government are ISB payment. The International Sovereign Bonds are the largest debts for the Sri Lankan government, The debt is amounting to 1 Billion dollars. This means 25% of the entire outstanding payment. The country has depleted as much as 70% of its entire international currency reserves in no time. As per the government predictions the country may be facing a trade deficit of 10 Billion dollars this year.

The major expense for Sri Lanka is its dependence on Imports. The country needs to import Sugar, Cereals and Pulses. Alongside this the need for fuel is also a major requirement. Thus the country lacks money to pay for all such expenses upfront. On such grounds the country’s government banned chemical fertiliser usage in production of agro products. This severely damaged the production of rice and sugar in the nation. Thus the entire country’s resource needs have increased even more.

Thus if we look at the scenario from an economic point of view we may say that the supply is less and demand is more which has led to price hike. However, the price hike is also not sufficient as people can’t eat money and survive. Food shortage is the major problem experienced in the current situation.

This problem is followed by Fuel crisis and power generation. The nation cannot provide adequate power generation to its people leading to half day power cuts in the entire nation. Then there was a paper shortage in the nation which led to cancellation of examinations this year in the entire country. Hence everything it imports is more or less under the shortage category. The only reason behind this is inadequate resources for payment of outstanding dues.

The Rajpaksha government suffered a major loss in this situation as they failed to hold on to their majority. More than 26 ministers left the cabinet due to public pressure. This has led the ruling party to announce a united government stand. However the power feeders cannot afford to lose their power. The head of the government and president of Sri-Lanka refused to step down from his position. However he has offered the opposition to form a majority in the Parliament and take over the government.

The opposition refused the united government proposal. This is mainly because the president refused to step down from his position.

To add mere bad luck to Sri Lankan political decisions one can recall the tax cut ideas of the Rajpaksha government. Before COVID hit the world the government’s campaign was baked on tax cuts. Rajpaksha applied the same on his win. However due to COVID the government cannot generate enough taxes from people leading to a national deficit. This led to the income deficit and hence supply shortages. Thus COVID hit the Sri Lankans very hard.

Alongside this when the war between Russia and Ukraine began there was a major price rise in three commodities – Crude Oil, Wheat and Sunflower Oil. Sri Lanka imported all these things and also needs to supply the same at any rates given their basic nature as essential commodities. Hence the government was trapped under a price hike scenario as well. To sum up the entire situation one might say that nothing can save Sri Lanka right now except a big loan.

The country is in talks with Asian Development Bank. China and India for the same. It has also provided a detailed plan to IMF for its loan application and it would be approved very soon as the country is drowning of basic necessities.