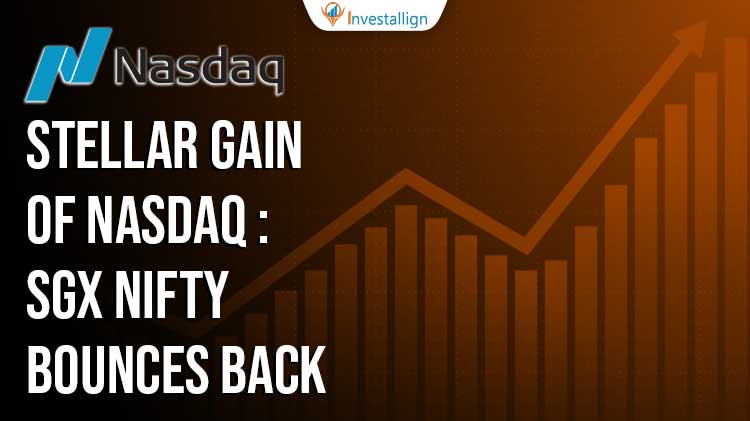 Since the beginning of this year the markets have been facing a huge downside due to the global problems and the economy under the pressure of heavy inflation. All the major indices around the globe like Nasdaq, DAX, Hang Seng, Nifty50 etc. were facing mighty pressure from the bears. This was due to the slowdown in business given the interest rate hikes and inflation. Yet the previous quarter showed some hopes for the world for a stable recovery.

The results of the previous quarter were however dented but they are better than the Y-o-Y basis. Also the results are better than the quarter before this time. The major result that one can expect is the slowing down of inflation aid, the global tensions of Russia Ukraine war and the market sentiments being bearish is a decreased inflation rate. This could give a stellar boost to the market participants as they have been eagerly waiting for some good news for a long time.

The latest inflation data published in the previous week indicated that the U.S inflation rate was 7.75% from 8.20% in the previous findings. This was a major relief given the slow effects of the interest rates hike are beginning to show their results. However this rate is still very high from the 6.22% displayed last year. Also the rate is very much above the long term average rate of 3.27%. The CPI data showed a slowdown in the prices. This means that the prices of goods and services are decreasing and the rate is 7.7% which is lowest on a y-o-y basis.

The direct effect of the inflation data was seen in NASDAQ. The index gave 6.3% returns in one single session. This means that the markets are extremely changing their sentiments over this data. This move indicated that the investors were extremely worried about the inflation data more than anything else. WIth a possible note in the data published the market participants are changing their sides and are now looking for better returns in future. However following this data the Indian index also reacted in a massive move.

The Nifty 50 ended in red before the announcement of inflation data. The markets were not expecting any string recovery since the index was below 18000 again. However the markets performed in an extreme manner with the data support. The Nifty50 went down to 17950 levels on the same day before the result announcement. Post the market session ended the data was rolled out. With the decrease in the rate the SGX Nifty reacted with a stellar 450 points rise. This means that the FII went extremely bullish on the Indian markets. This was also seen in the Nifty50 index on the very next day. The index showed a jump of 300 points on its pre-opening figures. Currently the Nifty50 ended at 18350 levels. Also the index broke its 52 week high and gave a new high of 18362. This is however lower than the all-time high of 18600 points.

Also post the market timings on 11th November, 2022, the SGX Nifty continued its gains. The index ended at 18473 points. This means another jump of 120 points post the market session. Hence one can expect another green day for the Indian stock markets.

Every sector was trailing in the green zone but the major winners were HDFC Group and the Tech sector. The banking sector crossed its all time high and made a new high of 42345 points. Also the index ended at 42137 points which is slightly below the open price on that day. However the major winner from this data can be the technology segment in India. The Indian I.T sector has been under the pressure from bears since a long period of time. This is because major business of the tech segment is outside India in the U.S. and Europe.

This gives the edge to the tech sectors as the business would again start accelerating so this would give them better revenue for this quarter. Also the dampened prices would come to a stable rate now. In other words the major tech stocks were trailing around their 52 week low prices. Post the announcement every stock has been able to gain at least 2 to 4% in valuation in one single session. The stock prices of the I.T sector are down by an average of 20 to 40%. This means they have a huge upside chance in comparison to the other segments.

Hence one can assume that for Nifty50 crossing the all time high level of 18600 it would require the support of the technology sector. The reason is the tech sector has a major share in the Nifty50 sectoral distribution. Hecne the I.T sector has the chance and power as well to lift the Indian markets in the current situation.