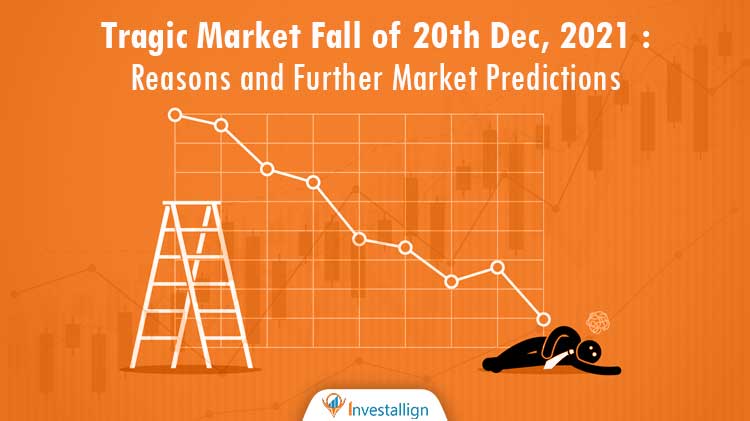 The Indian markets of 20th December were like a roller coaster ride in the midst of a red bearish zone. The markets were constantly breaking every support level and went to the levels of 16410. This was a new maxed out level for the last few months after the previous lows of 16600 levels. Today the markets were literally bleeding in loss. The investors lost a huge chunk of money worth approximately 6.80 Lakh Crore as the Indian Indexes registered their lowest figures for the last 4 months.

The day can be really termed as a Black Monday as almost all the stocks were into red in the middle part of the day. This happened due to multiple factors like Omicron, FII Selling, Panic among Retail Investors, Selling in Nifty50 Stocks, Huge dips in Reliance and Banking Stocks. The Markets reacted quickly to the global trends of increasing cases of Omicron. There are certain actions taken to control the spread amongst which the primary measures include restrictions in the international flights.

The government has also increased the testing centres to detect the early spread and stop the same from pursuing ahead. However the current market trend is clearly moving ahead like the COVID period markets. Everyday there has been selling pressure in all the three segments of Equity markets (Large Cap, Small Cap and Mid Cap). Even the penny stocks are performing really bad in such favourable conditions.

The foremost examples for the same are VodaFone Idea, Yes Bank, Reliance Power, etc. These stocks are having excellent news and results in their pockets yet the investors and traders are not showing any confidence in long term buying positions. In today’s market as well the future group was up due to the suspension of the AMAZON deal by CCI. However Reliance was unaffected against expectations due to the Reliance-Future Deal. On the other hand it was one of the major losers in today’s market. Hence the current flow is not about news or fundamentals rather it’s all about volume.

The Indian investors are facing a dilemma to hold their positions and assume the market to go back on top or to sell off and hold for a better pricing opportunity. But in reality the real investors are preferring a third strategy that is called buying at dips. People are so sure about the market recovery that they are buying at every opportunity possible. This way their average is getting down and the scope for profits are increasing. In the current situation one should not look at investing into markets through a differentiation of penny stocks or mid cap or large cap stocks rather they should prefer the fundamental and financially capable stocks.

Such stocks have a better probability of giving a constant and increasing returns over a long period of time. The preference can be moved towards the blue chip stocks as they would be the ones to bring Nifty50 and Sensex above their current levels. However for better returns one has to pick up companies having a better chance of achieving high growth in the upcoming bull rally. Previously everyone noticed that though the market was performing well stocks such as IEX, IRCTC were the winners as they gained the highest returns. For more investment opportunities visit https://www.investallign.in/.

Omicron and Sell Off

The major reason was not Omicron but the panic created among the retail investors. Till date the FIIs are the ones that have been selling their stocks but for the first time support from retail investors was not much noticed. The major reason is that their money is currently into the IPOs. There have been 2 major IPOs that have attracted most of the investors like Data Patterns and Supriya Lifesciences. Thus the FII overtook DII in today’s sell off and the net market selling amounted to close to 1000 Crore Rs.

Along with this the Nifty50 had also formed a head and shoulders pattern in the previous week which gave out a string signal of sell off. However the markets settled 200 points above their lows and made a tragic recovery. The current situation of Indian markets is like a pendulum swinging in either direction. The markets are also swinging in ether directions and it is not possible for anyone to identify the upcoming trend or direction of the market. However some insights on the support and resistance levels are as follows :

The Nifty50 made a low of 16400 in the current trend. However the previous bull run began from 15800 levels.  There was one fall in the market which bottomed out its levels to 16200 from 16600 levels. This could be the biggest hurdle for Nifty50 in the upcoming time. If it breaks 16200 levels one can predict a further touchdown to 15800 levels. It is the most important support levels for the last 5 to 6 months. Moving forward if the market crosses 17200 Level then it has a further road to reach up 17650 level. But if the rally is gonna be upward than the major resistance level is to cross the 17700 and 17750 levels. Above these levels the bull rally can sustain for a long time.