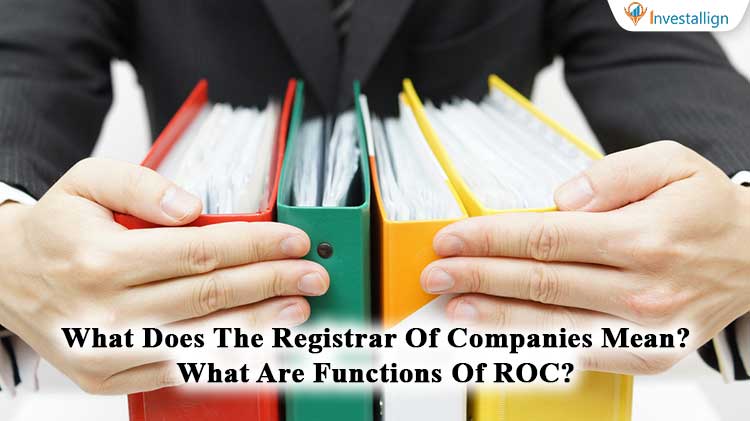 Registrar Of companies or ROC works under the department of MCA (Ministry of Corporate Affairs). The MCA works on behalf of the government to administer and keep an eye on every movement of the companies registered in Indian. The companies should be private or listed or LLPs. the registrar of companies is given the duty of handling every matter regarding company registration as well as post company reporting. There are different registrars per state. Hence almost every state has its own registrar.

Today there are 25 registrars in India. In some states due to the huge number of companies there are two registrars assigned to the working. These are Maharashtra and Tamil Nadu.

There are numerous duties of registrar. To speak in a layman language the Registrar Of Companies has to work carefully on registering the companies. The ROC also takes care of company restructuring or any other major changes in it. Every change in the company needs to be registered to ROC within a decided time frame. If there are any legal cases against the company then also a report is to be given to the ROC for reporting the scenario.

As per the sections assigned to ROC, Section 396 (Section 609 previously) under the Companies Act, 2013 deals with the duties and functions of ROC. It says that the Registrar is given the work of registering the companies and LLPs across all the states and the Union territories.

The Registrar keeps a note and record of all the events registered by the company. The ROC compiles all the vital information and files them under the company name for government reference. The ROC stores the information and renders it to the general public on payment of pre-decided fees.

Process Of Passing The Information

When any incident happens within the company or the company gets through some changes it is given a certain time frame to register it with the ROC. On registering the information the ROC complies with it, makes a report and hands it over to multiple news channels and multiple consumers who are willing to pay fees for that information. Majorly such consumers are major news channels such as Bloomberg and NDTV. These companies buy the information and make sure that it reaches the common public in an unbiased manner. Hence the chain of delivering information works from :

FACT : Many times in the market a person notices that there is major buying or major offloading of stocks which creates panic in the market. Such sell off or buying happens as a result of this information given to the ROCs. Hence whoever gets the hold of such information earlier can react to it before others know about it. This way the person can take advantage of his information source and earn more profits.

There are many subscription models of various news journals available for such purposes. One such is Bloomberg. On registering to it a person gets the information regarding the company as soon as it gets registered with the ROC.

What Are The Functions Of ROC ?

ROC has multiple functions to perform. They are extremely important as the companies registered are not only local but major MNCs as well. Hence any information contains a multi million dollar amount of transaction value due to the stock market changes of that particular registered company. Major functions performed by ROC are :

The work of the Registrar is not only limited to the registration of the companies. Its work even continues after the company’s incorporation. Whenever the company has a change in the board of directors or the company changes its name or it wants to update its objectives the ROC needs to be known about it. After the approval of ROC all the decisions regarding name change can be made. Also if the changes are not registered with ROC in stipulated time the company is charged with a fine on such delay.

Registration Process Of Companies With ROC

As mentioned earlier any company needs a certificate of incorporation for coming into existence. The ROC offers this certificate after the company completes the prerequisites of the process. The company needs to submit the MOA and AOA, the agreement with the directors and their duties along with a declaration from one authorized person. The declaration should mention that the company has met with every requirement that needs to be done.

For a public listed company one additional document is required. It is known as COC (certificate of commencement). After submitting all the above mentioned documents and the COC the public company can start its process of working.

Can ROC Refuse a Company From Registration ?

How  Does The Resolution Filling Process With ROC Works ?

Any company with a legal action against it or any involvement with a lawsuit needs to inform the registrar regarding the same. As per the Companies Act, 2013 every resolution needs to be filed to the ROC within 30 days of happening. In case of failure there are penalties attached by the Government. Hence the company needs to file every information regarding change of directors, prospectus or self winding up procedure or any action.