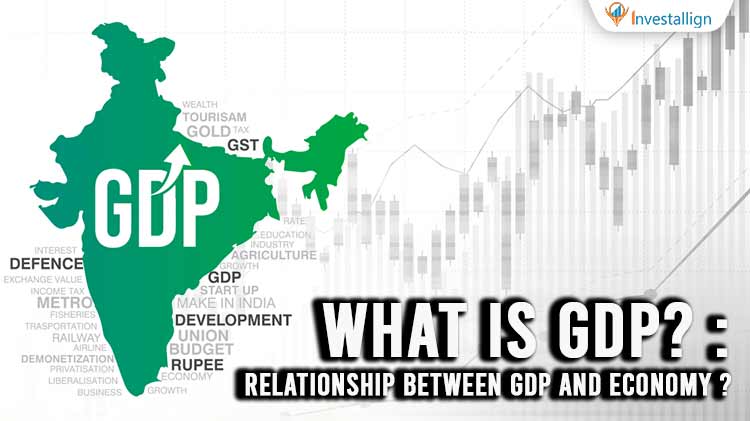 GDP is the final value of finished goods and services produced within the country in a specified time frame. For a wider range GDP is used as a measure to know the financial and economic health of a nation. GDP is calculated for a quarterly basis, annual basis and fiscal policy term. GDP also referred to as gross domestic product is calculated by taking three major figures of a nation. They are expenditure, production and consumption. It helps to know the economic progress of a nation and what is the history and track record of a nation. Also for GDP calculation foreign exports or trade is a very important measure.

Hence GDP is calculated on the basis of consumption and production of a nation. Also a major part of the GDP is based on BOT ( balance of trade). More the selling of goods and services offshore by a nation’s domestic producers, more would be the GDP and vice versa.

GDP includes only the net value of the finished product and not the cost or value of raw material. This avoids the error of double counting.

There are many variants of GDP that are taken into consideration for measurement of various aspects of an economy. They are :

It is calculated on the basis of the current ongoing market rates. The nominal GDP is the raw measuring tool which is inclusive of price increases in the open market. It is generally calculated on a quarterly basis which is the shortest measuring period of GDP.

This rate is always lower than than the nominal GDP. It is a measuring tool indicating the actual change in GDP of a nation regardless of the changes in the inflation rates. This tool neglects the inflation occurring in prices and compares the nation’s growth with its figures in a base year. For calculating this the data scientists ignore the trade transaction from domestic as well as offshore people to avoid the exchange rate fluctuations as well.

It is a measurement based on quarterly figures. It compares the growth on basis of the quarterly numbers of a nation’s business cycle. Hence if the growth is negative indicates that the nation has been stagnant and is not developing further. Rather the business opportunities available with the nation are getting deviated to other suppliers. Hence it is a very important measure to know the constant changes in the growth cycle of a nation.

It measures the GDP available per person in the nation. It indicates how much a person accounts for GDP in a particular nation. When the population of a country is huge it becomes difficult to compare and measure the growth rate of it. Hence by dividing the GDP with the total population one gets the per person GDP rate which is an easy measure to compare growth between two nations. Also it indicates which nation is superior to others. It eliminates the population difference between two nations.

Also GDP is a measuring factor for outlying the future of a country. If a country has more GDP but less population it means that less people are working more productively and the nation is growing faster. On the contrary more people with lesser GDP indicates the slow growth in a nation. It also says that the nation is performing below its limits and needs to perform better. This is exactly what GDP per capita indicates.

Why GDP Is Important To Common People ?

GDP is an important factor in deciding the international movement of funds, setting up the interest rates and scaling the unemployment problems.

For instance if the GDP is rising and the growth in GDP for a nation is constant. Also it looks that the nation’s growth can expand further as well, then the international funds would travel to that country. Hence investors would invest heavily in the companies working in that economy. The simple reason is profit. Every investor invests his money in profit business and the investors are lured towards high returns. Hence when a nation’s growth is constant it means that the company in it would grow further as the nation would grow if the industries in it would expand and grow. So in layman terms if the GDP growth rate is stable and increasing over a considerable time frame then the investors would divert their funds into that particular economy.

Now this diversion of funds would affect the interest rates in the country. Due to excess of money the interest rate would go down and the banks would be forced to lend money at cheaper rates. The reason is foreign bans would also like to lend money to the companies in that nation and hence to stay ahead in competition the banks would have to cut their interest rates and sell cheap loans for expansion to the companies. By this the goods would be available at low costs and the standard of living of that nation would rise due to the cheap availability of quality products. Also the government would intervene less in the private sector and lift bans for trade so that the companies can grow without legal intervention. Hence the government interference and interest rate so the nation would be directly affected.

In a growing economy more job opportunities would be created. The reason is the expansion of the industrial and private sector. Also due to growth more people would be employed, this means more money would be available for spending. This indicates the increase in demand of goods and services. Hence to meet the demand more domestic production would be required and hence again more employment opportunities would be generated. This way the flow of money in the economy would also increase and change would change hands rapidly which is a very important factor for growth of an economy. Hence Higher the GDP better for the nation.

Relationship Between GDP and Economy

GDP and economy are directly proportional to each other. Higher the GDP better the economy. More growth in GDP indicates the growth of an economy. The reason is the above mentioned factors. More GDP would attract more funds, cheap interest rates, company expansion, increase in employment opportunities, better standard of living, more spending and more demand of goods and services, more production of goods to meet the domestic as well as international demands, etc. hence all this factors are responsible for growth of an economy. Hence the better the GDP, the better the economy can grow.

When a nation’s GDP is suffering a downtrend it is an indication for investment opportunities. For example let’s understand the COVID situation and markets. When the lockdown came into effect the entire market turned red and the indices were almost 50% down from their actual prices. The GDP of the nation also suffered at that time due to the lack of exports and less demand. Also the investments were washed out, hence the entire formula of GDP resulted into a bad figure at the end. This is a sign that the nation is raw for investment.

So a lower or suffering GDP is an indication for chances of higher returns. The result is the current market situation NIfty which was once almost 7500 has now reached 15000 points which is almost double in just 6 months, hence such opportunities are also indicated through the GDP figures of a nation. Hence GDP is a very important factor of measuring the economy and it should be considered while taking decisions regarding investment.