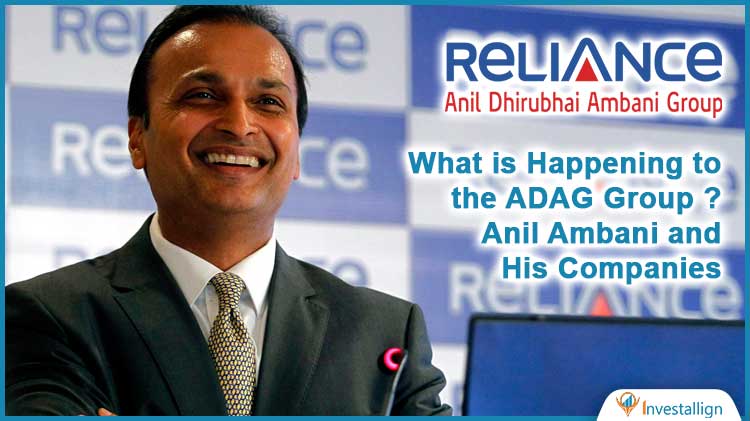 ADAG is a Reliance group under the control of Anil Ambani. He is the younger son of Late Dhirubhai Ambani and Kokilaben Ambani. After the demise of Dhirubhai the Reliance group was under the threshold of who will lead the company and this led to a fight between both the brothers. Later on Kokilaben settled the fight by distributing the companies between the brothers. ADAG group got hold of sectors involving Capital, Infrastructure, power and entertainment. Anil Ambani has partnered with Adlabs for his entertainment business expansion. His IPO for Reliance Power was the largest IPO and was subscribed within 1 minute of its launch. Anil Ambani was presented with multiple awards in India and across the world due to his business acumen.

However the success for the ADAG group was not long lasting. Anil Amabni started losing wealth and has been termed as one of the fastest destroyers of the same. He is the fastest in the past 100 years for wealth destruction. The reason is the increasing amount of losses of his companies and gradual reduction in market capitalization. The market cap of his companies declined by almost 92% and this is one of the reasons why he went bankrupt as well.

As far he has been held guilty for non payment of many dues and has even been issued a warrant of arrest. However elder brother Mukesh Ambani came to the aid and bailed him out.

As per the list current valuation of the companies are :-

This displays that except one company that is Reliance Communication, all others have shown significant rise in their valuations.

Reason Behind the Significant Rise

The main reason is very obvious, rise in trading volumes and increased delivery for the company shares. The reason behind the increased volumes is increased revenue across the group. The ADAG group is showing a significant increase in revenues and decreased losses. For instance the Reliance Infrastructure has been posting a net loss of 47 Crore which was 155 Crore Rs in previous year. This is a more than 100% decrease in losses. Also the revenue for the firm has increased from 4000 Crore Rs to 4600 Crore Rs.

Reliance Capital on other hand is increasing just because  of infusion of volumes. The Company has just generated turnover of mere of 2 Crore Rs in the previous quarter. The losses have increased by 1000 Crore Rs. However the increased share valuation is supporting the run of the company.

Reliance Power is the real game changer in the ADAG group. The company has posted profits this quarter which is a very good indication for the ADAG group. The power sector has been on the run for many months. If we look at Adani Power, Adani Transmission, Torrent Power, CG power, Suzlon energy etc. every share has doubled in valuation and some have increased even more. The reason is increased demand for the power supply. Also the Power companies have been in the sight of people due to the electric vehicles.

The electric vehicles have set their foot in Indian Automobile Industry. Many companies have even started selling the same. This will give a major rise in the demand of POWER for charging. This means increased revenues for the power companies. Also the fuel prices have been on the rise for a long time and have touched almost 100 Rs in many places. This is another reason why people are shifting towards electric  cars for cost cutting and saving money on fuels.

Rumors of Mukesh Ambani Getting Involved in ADAG Group

As of now there has been no news of Mukesh Ambani taking a piece of any ADAG company. But there are rumors in the market of my elder brother loaning someone money to Anil Ambani for business purposes. Also Mukesh Ambani has rescued him before going to jail.

Recently Reliance Power has issued preference shares of almost 1320 Crore Rs to Reliance Infrastructure. This will be approximately 60 crore shares. This fund is aimed to be used for further expansion and long term projects. Also the Reliance infrastructure has been improving on its business line. The company has bagged a big sale contract of 2600 Crore Rs for its Mumbai Metro Project and has also raised money from Delhi Project at 3600 Crore Rs. These streak sales have caused the company’s debt reduction from 14300 Crore Rs to 8781 Crore Rs. Hence these two companies are in a close watch list as the ADAG Group’s journey goes forward.