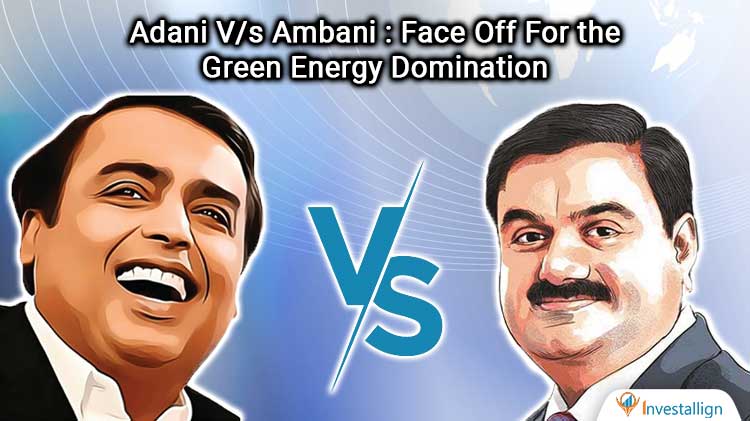 Green energy is the new age of power generation. The investors around the world are shifting their focus towards the businesses who harm the environment less and fit under the categories of ESG funds. The fund managers are also trying to pick such companies under the name ESG as the world is moving towards energy generation by harming the environment as minimally as possible. In India the leader as if now in the green energy segment is Adani. Through the company Adani Green, the group has been actively involved in energy production. It’s share price soared five times since the March 2020 fall in the market. Actually the reason for Adani group entering the green energy segment is its domination in the coal and energy production business.

Adani group has been very actively involved in the power generation and transmission business. Among its listed companies Adani Power has been a major producer of thermal energy in India. Also Adani Transmission transfers this power to its destination. Hence the major Adani Revenue comes from the power segment business. Also the company is a dominant player in coal trading in India. Adani was also in the news with its win on Australian coal plant. There have been multiple criticisms regarding its coal business and power generation. This comes because the company has not at all placed the needs of nature or environment across its business segments.

Due to this Gautam Adani started the operations of Adani Green. It produces energy through renewable sources. It is also the leader in the Indian markets in the current situation.

Reliance has been active in the petrochemicals business in India. In recent times the company launched its telecom arm JIO and also developed a retail business. This has not only diversified the company’s product portfolio but also given out multiple revenue streams. Reliance has been an elephant in the Indian markets. It has always disrupted its competitors on basis of its liquidity and lower margin availability. It’s recent example is JIO. The company not only dethroned Vodafone Idea and Airtel but also made Vodafone Idea suffer from a huge financial crisis.

Among such business expansion plans comes the news of Reliance entering the green energy segment. In its recent AGM it mentioned a 10 Billion dollar investment into this segment. If we look at Reliance history, previously it was criticized for polluting the environment due to its petrochemical business. This gave rise to the mango business for Reliance Industries. Reliance bought farmlands across its refineries and converted them into mango farmlands. This made Reliance a biggest producer of mangoes and also a respected group in India.

With a similar approach Ambani is entering the green energy business. He wants to become a zero carbon emission company by 2035. To speed up this goal, Reliance is keen to set up manufacturing facilities in Jamnagar for green energy production. This gave rise to a hypothetical rivalry between the top two richest of India – Gautam Adani and Mukesh Ambani.

Reliance’s latest AGM mentioned multiple plans regarding the green energy generation from the group This consist of a 10 Billion dollar investment in next three years. Among this also comes the news of its goal for becoming a carbon free company by 2035. This will make the company to attract funds from various investors who are keen on investing in environment friendly companies. Also the ESG funds would invest into it. With the investment Reliance plans to produce close to 100 GW in solar energy by 2035. This is the news which started the rivalry between the groups.

Adani has been the current leader in the green energy segment. It produces close to 3.5 GW currently. After the announcement from reliance, Adani mentioned that the company would increase its capacity by 5 GW every year. This will make the company’s capacity close to 55 GW by 2030.

With this Reliance would definitely beat Adani and become the market leader. The company would be twice as much as Adani. This hypothetical scenario has attracted the attention of many inventors in India and across the world.

Also in Indian markets there has been a huge space available for production of Green energy. India has the cheapest energy available in the world currently with the lowest prices close to 2.70 Rs per unit. The procedure followed in India is auction based fee. This would lead to a much lower price of energy in later ties to come. As per the prediction the per unit fee is calculated at close to 1 Re. by 2030.

Both these companies have so far stayed away from each other’s territories. This can be an outcome of the ties with the PM of India. The goals of Narendra Modi are in parallel lines with these companies’ future plans. Both of them would jointly account for 1/3rd of India’s domain for green henry in next 5 to 10 years. India being the second largest country by population would benefit in large numbers from the green energy available in abundance. This is also seen by the upcoming demand for electric vehicles in India.