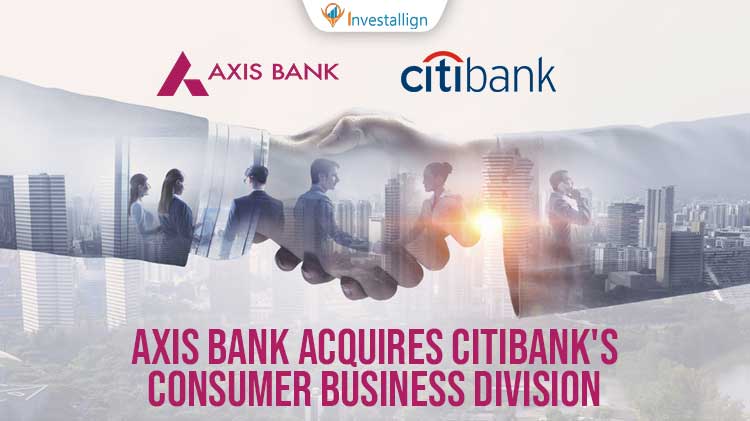 Axis Bank is one of the best banks of India. It is owned by LIC, UTI, Oriental Insurance, New India Assurance Company Limited, United India Company Limited, GIC etc. These all together hold approximately 30.81% of shares in the company. Rest of the ownership is shared among Mutual Funds, Banks, insurance companies, FIIs, individual investors and corporate bodies. The bank was formerly known as UTI Bank on its foundation. The name remained the same from 1993 to 2007. Later on it was changed to Axis Bank.

Axis bank has been into highlights nowadays due to its merger with Citibank. The consumer business division for Citibank is to be taken over by Axis Bank.

The Axis and CitiBank Deal is set to round up around 12325 Crore Rs. The deal would allow Axis Bank to take over the consumer division of citibank. His includes credit cards, Covering loans, retail banking operations and wealth management However all of these is valid only for the Indian domain. Thus the entire Indian consumer business division of Citibank would be taken over by Axis Bank now.

The deal would allow multiple benefits for Axis Bank as per its press release. Axis bank believes that the takeover would result in 3 million unique customer acquisitions from Citibank’s database. Thus the segments would be widely accessible now to Axis Bank. The major part of the deal is related to the Credit Card Business. The deal would make Axis Bank the third largest card issuer in India. The deal would make its sheet for cards expand by more than 2.5 Million credit card accounts of Citibank. This means a 57% growth in its credit card business.

Also the loan segment of Axis bank would be enriched by Citibank’s customer footprints. This would mean a continuation of business along with new customer acquisitions. Even in the wealth management segment the merger would make Axis Bank the third largest in India. The major aim behind the merger of Wealth Management areas is the expansion of Axis Burgundy Brand. Yes, the premium range of accounts available at Axis Bank would be targeted directly through the 1109 Billion Rupees of AUM available through the deal.

The deposits for the bank are forecasted to increase by approximately 502 Billion Rupees. The corporate accounts for the bane owls increase by 1600 in numbers. An average of such accounts equals to 70000 Rs of salary transacted every month. Axis Bank will also get accessibility towards 499 ATMs, 21 branches and 7 offices in 18 cities of India. Thus the deal is a power packed deal with multiple benefits for Axis Bank.

The deal has been so far approved by both the board but it still stands on conditions of receipt of regulatory approvals. Post the deal Axis Bank will get hold of Credit Card Business, Wealth management, retail banking and consumer loans. Alongside this the NBFC of Citigroup – Citicorp Finance India Limited would be handed over. This is definitely a game changer as the bank gets a direct entry into the NBFC segment. The penetration in this segment would be mostly into two industries namely construction equipment and commercial vehicles. If the merger serves right then Axis Bank will be loaded with new 28.5 Millions savings accounts, 10.6 million cards and 2.3 Lakh or more Burgundy customers. This would give a mega boost to its daily and premium business segment together.

Board and Directors Statements

As per the statements provided from both the companies, no changes would be noticed by customers whatsoever. In other words this would be a very smooth translation. Also the Axis bank is already having some Citibank Alumni under its employee list which would make the process even simpler and blend the tradition at both the colonies. The customers are promised a maximum level of satisfaction post the deal. From Citibank’s perspective they will still continue to function into multiple business segments like Finance, technology, operations, Analytics and other allied functions through its solution centres in 5 cities of India.

Many well known firms are included into the merger procedure so that the entire transition becomes simpler. The financial advisors for the deal are Credit Suisse and Axis Capital. The legal advisor for the company would be Khaitan and Company. Additional support has been asked from Boston consulting group and Pricewaterhousecoopers. Thus the deal is nearing its maturity once the clearance is provided.