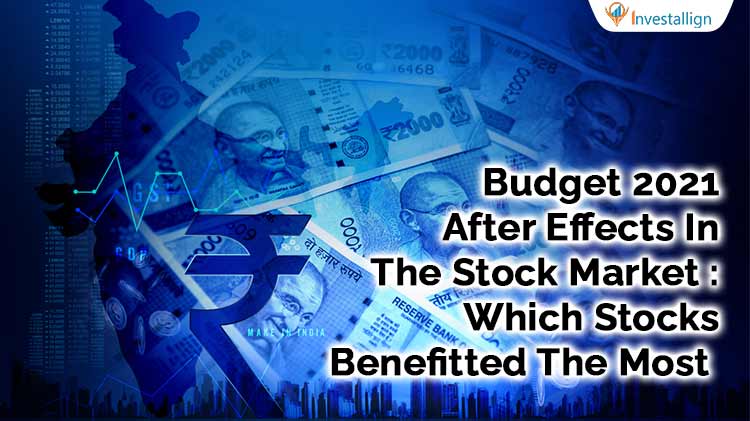 Budget 2021 was planned by taking the 9.5% fiscal deficit in mind. The finance minister focused on reviving the economy which has been pushed down due to the corona effect. The budget aimed at revival of the industrial segment and had less focus on the common man. The industrial growth was the heart of the entire Budget 2021. In order to revive the dying economy the Government has taken various measures and planned various steps so that the revival is quick. The finance minister expects that if everything goes as per planning the fiscal deficit that is 9.5% currency would cut down to narky 6% in the coming year. Hence the deficit would reduce by 3% gradually. Having a 6.5% deficit is still a painful sight but being the fastest developing economy India has great focus from investors. Hence the investors are expected to find huge capital and be a part in the growth stages of India.

After Effects of the Budget

The budget 2021 brought a bull momentum into the market. The Indian market that fell closely to 1000 points has now recovered and grown further more. The reason is the measures suggested by FinMin in the budget policy. The ministry suggested incorporating Asset management companies to tackle the NPAs. The budget 2021 also included health care package and focus on farmers.

So the chemical or pesticides companies and healthcare companies have seen a major rise. The auto companies are making their moves as well but the major gainers in the market in the current scenario are banking stocks. SBI crossed 300 Rs and IndusInd bank crossed 1000 Rs mark in this rally. Also the only factor that is stopping the market to cross 14900 and 15000 level is the RIL-Future deal problem. But when that goes through the market would rise significantly as India is a fastest growing economy and the MNCs have started trusting Indian markets more than Chinese markets after COVID crisis.

The government announced that it will provide more funding to hospitals for tackling the COVID situation. The healthcare package was a key aspect in context to this statement. The government said that the package it will provide contains at least a 135% rise in amount. Hence the previous budget for healthcare got a robust increase. This will help the stocks pertaining to the hospitals. The main gainers for this are Metropolis Healthcare, Apollo hospitals, Max health insurance, Dr. Lal Path labs etc.

The benefits that the companies gained are in the form of direct and indirect returns. In case of Hospital stocks they would receive more business at cheap costs. For insurance companies the claims that are needed to be settled would be less due to the improved health care system. In case of pathology companies they would also have increased business due to more testing facilities for various disease detection. Hence healthcare infrastructure is a primary goal for the government after experiencing the problems of COVID situation.

Real estate sector is another sector having the major benefit from the Budget 2021 decisions. The reason is the government allowed continuation of the previous incentive schemes applied to real estate. Also the government Announced a new institute named DFI (development finance institute) which will be given a funding of 20000 crore RS. This funding would be utilized for fueling the infrastructure projects. Also the government to pan out funds of nearly 5 lakh crore for finishing the 3 year and 5 year projects under NIP. L&T is a major beneficiary from the budget 2021 in this segment.

Steel and aluminum are going to be available in higher quantities domestically now on, the reason is the new scrap policy. The government allowed the policy stating that the unfit vehicles are not to be scrapped now on and hence the steel availability is going to boost up, this will mean that the cost of steel and aluminum will decrease significantly due to less dependence on imports. Also the government is planning to expand its highway line by more than 10000 kms approximately which means the demand for steel will also increase. Also the government is planning to build 8 new cities and rapid transport rail projects for 27 cities. This means that steel and aluminum are going to be in demand for a very long time since the budget 2021.

The ministry has announced that it will create new asset management companies with funding of 20000 crore Rs. this is planned to bring down the value of NPA arising into public banks. The private banks also have a large pile of NPAs when out together but the largest NPA holder in India is SBI. Hence the AMCs would work on behalf of the government to clean up the NPA segment in PSUs.

The textile industry is also kept into notice this time around. The government is expanding the textile parks in India. More than 7 parks are planned to be built in the next 3 years to grow the textile business in India. The textile available right now is very costly as well. This time around the government has started charging custom duty from cotton exports. The duty is set at 5%. This means that existing cotton will become costly. This will bring more cotton to domestic manufactures and the cost of cotton clothes would go down. The summer is about to get on and people prefer cotton clothes in summer. Hence the cheaper cotton can prove as a significant factor in boosting the sales in the textile industry at this time of the year.

The liquor industry is set to take a hit due to the infusion of new agriculture cess. This will increase the prices of the liquor available in India and hence the casting factor may bring the demand for the segment down by a huge number. But on the other hand the agricultural commodities and related products would become much cheap as per the government statement.