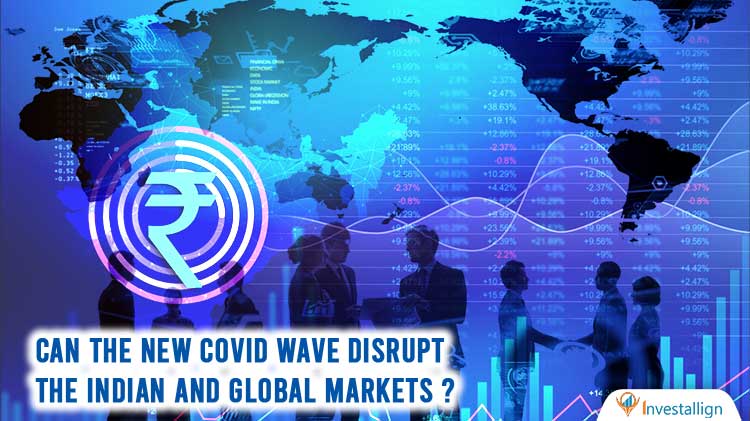 COVID is the most trending and most important topic on which the market direction hinges in the future. Markets are very volatile and were running in a greenish mood but last week onwards the COVID effects have kicked in. The Nifty50 moved around 14300 from 15300 levels. On the Monday 10th April, 2021 it was almost a 600 points drop from the prevailing levels. The BankNifty fell for almost 2000 points in one single session which points us to the fact that almost all the banks fell nearly 5%.

The major IT stocks as well as the FMCG segment fell by 4 to 5%. This all was the result of the Second COVID wave prevailing in the country. People were so panicked that the government will impose another lockdown which will lead to a fall of Nifty50 again like before. However the market is still intact but this is not a fundamental factor only. There are several factors associated with it.

Overall the situation of the market is very good. Especially in the U.S. and other developed countries the situation is pretty decent. The Dow Jones is daily reaching new highs and all this is the result of the stimulus packages by the government and the rapid vaccination programme. Also the people there have suffered from COVID but there was partial lockdown imposed there.

Secondly the medical infrastructure of many foreign countries is very good and the government there takes strict and precise functions to stop the spread of COVID beyond any political gains. This has led them to stop the rise of cases and protect the citizens from this disease.

Countries like Canada have ordered 5 times the vaccination required and the U.S. has stopped the export of raw materials which are necessary for vaccination production. This all hints that nations are trying to firstly protect their own and then look towards others. This has given the citizens reassurance that they will be protected.

MEDICAL INFRASTRUCTURE AND OTHER FACILITIES IN INDIA

India is medically very backward. This is the outcome of the poor infrastructure facilities available in the nation. Besides such situations only 1.3% of the nation’s budget is spent on such facilities. The government hospitals are not really trusted by the people and nowadays due to the partialness of the government given certain events people have felt real trust issues on government.

At some instances it clearly seems that the government doesn’t care about the people in real life. The political rallies can go on along with Kumbh Mela but when any funeral or such events take place there is a limit on people gathering. Also the Tabliki Jamat was so much criticised and now the Kumbh Mela is organised where lakhs of people are going to take a dive into the Sacred water of Ganges. The same water which reaches multiple homes in form of water. Hence if there is a rise in COVID cases in India the government is more responsible than the unaware and reckless citizens and at the end the entire load is shifted on the citizens.

Hence this is the major reason why people feel that the government is unpredictable and that once all the political and religious events come to an end the government can at any time announce a lock down as per its convenience.

The vaccination program has its own flaws. Once a person is vaccinated and if later on he gets tested positive he cant take up a dose for the next three months. Also the effects of these vaccines are going to be seen in the later stages. The vaccines effects kicks in after 3 -4 months. Hence the vaccines taken today would render results later on. There is a very unbiased distribution of vaccines available. This distribution is done not on the basis of cases per state but on the basis of population and politics as well.

It is no fact to hide that Maharashtra is the worst hit state yet the number of vaccines provided is very less than U.P. The reason may be population but there isn’t a major difference in it. Rather the reason what people think is that Maharashtra is under Shiv Sena and not BJP whereas U.P. is under BJP with more number of seats to win than any other nation.

This time around people have already dealt with the situation once before. Hence they are not ready to offload their stocks so easily. As seen one year before the common man left their investments to get out of debt. On other hand the rich invested loads of money in the market and got richer. This has provided the general public information about the demand and supply function. People have also come to know about the power of such functions. Hence they have kept hold on their investments which is a strong reason why Nifty50 has not given below the levels of14250.

This level of 14200 – 14250 is a very high sentimental level . This level may be the support level but more sentiment is associated with it. The markets bloomed to the highs from this level. Hence the people are keen to stay aloof on their investments until this level is broken.

THE DIRECTION OF THE MARKET

In the current situation more important thing is to see that the case ratio decreases.. This will happen by two ways, either India reaches the peak or COVID precaution becomes more intense.

The market is much depended on the COVID situation.  The work from home or curfew situation will not effect the big corporates but the small traders are suffering losses. The lock down from 8 pm till 6 am will provide more loss of trade than protection. The traders have lost more than 46000 crore of trade daily due to this situation. The main sufferings would be noticed when the monthly results of sales come forward. The I.T would not be hit much but the FMCG would definitely suffer along with Food chains and restaurants. They are taking another blow due to this situation.

The current market situation majorly depends on the quarterly result announcements as well. Better the results better the stock price would become. Hence in current times the COVID may disrupt the manufacturing chain and result in disruption of business for upcoming months. So one should be cautious and should definitely mark their holdings and trade based on the support and resistance levels. The investors again need not worry about the temporary situation. Reason is after one year or so the Nifty is definitely going to achieve new heights.