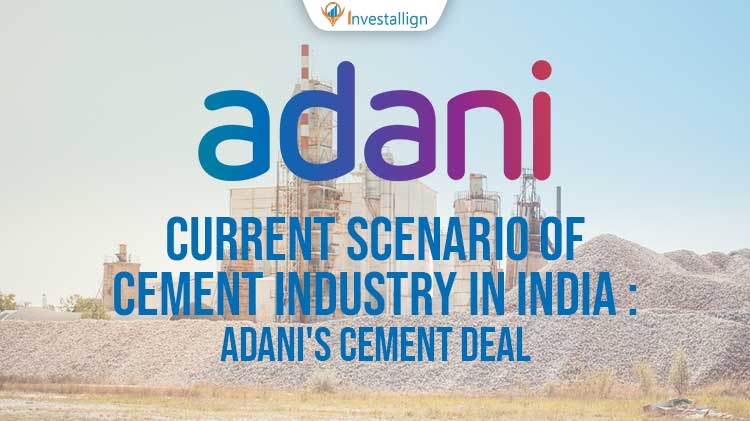 India is one of the major players in the cement industry. The country ranks 2nd in cement products all over the world. In addition to this the limestone deposits are considered to be of great quality in the Indian domain. This means that the quality of Indian cement companies is much better. The Indian cement industry is taking a huge hit from the increased transportation costs due to high fuel prices. The segment’s transport expense is considered to have almost tripled over the 2 years. This has resulted in a steep margin decrease in the company’s profits. However the industry is surviving on heavy demands locally and globally. The Indian cement exports amount to more than 7% of the entire world.

Alongside this the cement industry is trying to enable green fuel usage to cut down transport costs and benefit the environment in one shot. The Cement Industry of India is changing with the rapid growth of multiple companies over the years. Also with the recent deal of Adani Group to acquire cement giant Ambuja and ACC from Holcim group would change the entire competition scenario.

The Indian cement industry has multiple major players. However the entire scenario has changed post the Adani Holcim Deal. The top ones prior to the same are :-

The cement company is owned by Aditya Birla Group. It is a subsidiary of Grasim Industries and is the leader in the Indian Cement Industry. Not only domestically but the company also manages to stay at the forefront in the global markets as well. Its annual capacity is more than 100 MTPA. The company employs more than 1.2 Lakh people. It has an annual revenue of more than 38500 Crore Rs.

Ambuja Cement is a part of Lafarge Holcim. It is at the second position in the cement industry based on its turnover capacity. The company produces more than 29.65 MTPA. The revenue is close to 26650 Crore Rs. It employs more than 5200 People. The company’s market cap is close to 40000 Crore Rs.

ACC cement produces more than 28.5 MTPA. However its revenue is capped at 15400 Crore Rs. The company has more than 6700 Employees and over 50000 Dealers for its sales.

It is one of the most underrated players in the cement industry. It has a production capacity of more than 30 MTPA but only renders a revenue of 12555 Crore Rs. it has more than 6300 employees and renders over 7% of Cement industry’s share.

The Indian cement industry is going to get a new player in the form of Adani Group. Out of the top 10 companies, Adani group has successfully acquired Holcim group’s Ambuja Cement and ACC Limited. This move will take Adani Group on the top in terms of revenue. The revenue will be more than 42000 Crore Rs post this deal. The deal is more than 10.5 Billion Dollars. Ambuja Cement and ACC Cement together have a capacity of close to 70 MTPA.

Holcim Group owns 63.11% in Ambuja Cement and more than 54.53% in ACC Limited. The Adani Group will make a public offer for the additional 26% stake in the cement companies. The deal given by Adani would be at 385 Rs per share for Ambuja Cement and 2300 Rs per share for ACC Cement. The cement companies together have 31 manufacturing facilities and 78 ready mix concrete plants.

With the takeover Gautam Adani plans to double the production of both the companies in the next 5 years. Thus by then he plans to become the leader in the cement industry.

Among all the cement companies only two are listed in Nifty50. They are Ultratech Cement and Shree Cement. The others that are listed are ACC Limited, Ambuja Cement, Dalmia Bharat Cement, Birla Corporation Limited, India Cements Limited, Ramco Cements Limited etc.

The sector has been facing a huge pressure for a long time. The reason majorly was the rapid margin shortfall in the profits due to increased manufacturing and supply costs. However the price and demand are slowly increasing in the sector. AS per the experts the demand would not get any hit if the prices increase by 10% from the current rates.

However the pressure was still maintained on the industry due to Adani’s deal. The Adani Holcim deal will create a highly competitive environment inside the cement industry which will lead to a price decrease and margin shrinkage. Thus the further years are going to be tough for the Indian Cement players.