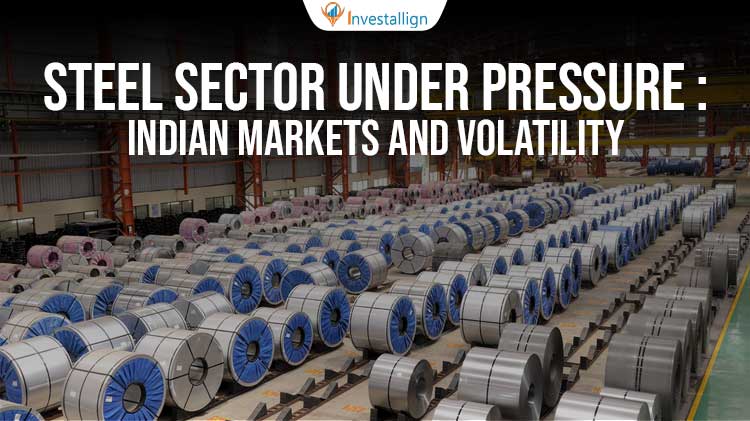 The Indian Markets are under a heavy volatile zone currently. The markets are moving so swiftly within one session that one can barely trace the SL points. The reason is one cannot expect the market movement as even one small news tends the traders and investors to move their money. For instance one can imagine the USA stock fall and the Indian effects of the same. The markets reacted with a 3.5% fall in the next session. However the markets also recovered 4% of the losses in the next session. Thus the market participants of India are having a volatile approach towards the Markets currently.

Among such a volatile market where news of the smallest importance creates such havoc then the information about export rate cuts can create mighty impacts. It is evident from today’s market itself. The Government decided overnight that the export duties for the iron industry need to be increased. Hence the duties applied have been moved up to 50% on iron ore and 30% on lumps. In the worst case scenario the pellets exported were carrying no export duties. However currently they would be imposed with 45% duties. This makes it pretty sure that the government wants to curb the metal industry exports in order to counter inflation.

In the past during the 2008 crisis the government took similar steps. The government wanted to tackle inflation and in order to do so it put heavy export duties on metal industry products. This led to a meltdown in the demand of the Indian metal industry and created havoc for the companies for almost one year. If we take such examples into account, then the Indian economy is in deep trouble.

The entire world is already suffering from inflation caused by the Russian and Ukraine war. Amidst that defaults from Sri Lanka are also playing their roles. Among all such scenarios if the metal industry loses heavy revenues then there would be heavy loss for the government at the end. Thus the effects of such steps are directly going to construct inflation moving up. However, on the contrary , the indirect effect is loss in government and private company’s revenues.

The government of India has proposed an amendment in the trade cycle of the metal segment. The government decided to increase its export duties on iron ore at 50% in all grades. Alongside this the lumps are now exported with 30% duties and pellets would be imposed with 45% duties.

The cold rolled and hot rolled metal products are now imposed with 15% duties for export. Hence export of almost all the major products in the metal industry are given rate hikes. This would make it extremely difficult for business globally. The Indian metal industry earns almost 25% of its revenue from export business. Hence a major revenue loss is headed in the way of the Indian Metal Industry.

The Metal Index faced a loss of more than 8% in its trading session for the day. This means that major stocks such as JSW Steel and Energy, Jindal, Tata Steel etc. also lost major valuations. To summarise the market reaction, JSW Steel lost 13.24% of valuation with this decision. On the other hand Tata Steel also lost 12.61% of valuation. Jindal Steel has been one of the major losers with more than 17% of loss in the day’s session. All of this was nothing less than a nightmare for the investors.

The markets were heading for an upside move in the early trade sessions. The reason was the early buying and last sessions’ gains. Hence the market posted a high of 16390 levels. However with the day coming to its end the Nifty50 lost its entire day’s gain and settled up 50 points lower than its opening price.

This was a shock as the gains close to 250 points were wiped out in just 30 minutes. BankNifty also faced a piece of the valuation loss and lost its 500 points gain to it. The Bank Nifty settled up for 34250 levels.

The Indian markets have been highly volatile for a long time. The VIX is currently trading at 23.39 and it was up by 1.25% today. Ideally a level in the range of 13 to 19 is considered normal. Any monuments above the same can be taken as unstable or volatile. With the market’s potential to lose 300 Point’s gain of Nifty50 and 500 points gain of Bank Nifty  in one single session the Dalal Street has been heading to a new age of volatility.

Hence one can only imagine placing the intraday levels with highest accuracy. The reason is with such a volatile market one cannot place Stop Loss and Take profit levels accurately. Hence the strategy needs to be modified.

The current strategy should be altering the portfolio to balance it out. On the other hand one also needs to explore the options like Debt Markets and Safe assets like Gold.