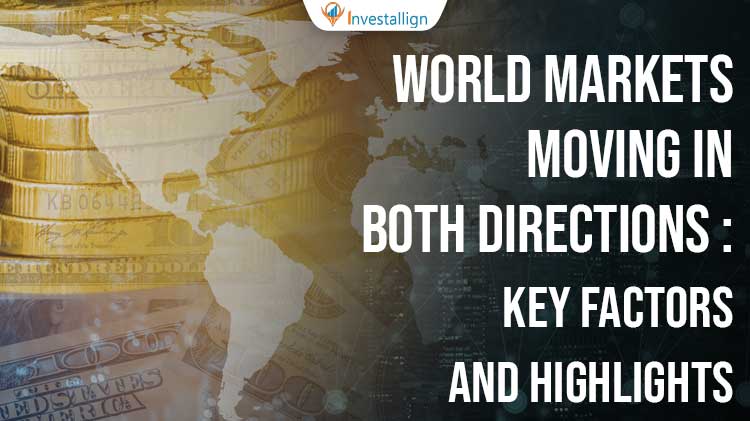 The markets around the world are drowning with losses. Be it the U.S. markets or the Indian markets or Chinese markets or Korean Markets, everyone is facing the effects of inflation and bad results. The U.S. markets are in a very bad state. The markets are down by almost 7% from the last month. There was a rapid fall of almost 3% to 5% twice. It’s because of the bad results projected by some of the major U.S. companies. Also within a week’s tenure if we look closely then the markets immediately shifted their momentum towards becoming profitable and regaining the week’s loss. In such a situation it is difficult to judge what would be the next movement of the Indian and World Markets.

If we focus on the world markets then after turning red the markets recovered almost 75 to 80% of the drop. However by the end of the week the momentum showed a bit of flow given the market volatility. When such a market movement is noticed i should be strictly adhered to Stop loss while trading.

The entire world is under multiple threats due to which there are signs of bear grip.

The entire world is under massive inflation. The prices of goods and services have touched all time highs and in contrast to that the incomes and salaries haven’t risen. This creates a heavy inflation load on the economy, Thus to counter this the Fed and other banks increased the rates. This was put to bring down the spending and hence balance the entire situation. However the inflation and rate changes had a massive impact on the markets. In Fact it is one of the major reasons which resulted in decline in market indices across the world.

The Sri Lankan government has been defaulting onto its payments to world trade. The country has run out of foreign currency reserves and is currently facing a heavy debt load. The situation even worsened when the country declared bankruptcy and hence all the trades with the country across the globe are facing heavy fear of recovery. In such a situation the country is asking for help from various international institutions. With such a scenario the world trade has been warned about the future instances of COVID crisis and even the bad political structure results.

The war between Ukraine and Russia never ceased to provide impacts on the economies around the world. The Russian government is obsessed with capturing some of the major Ukraine areas and this has created a fear among nations such as the U.S.A, U.K. and organisations such as NATO and EU. The Russian army has succeeded with its endeavours till date and the Ukrainian infrastructure has been facing major losses. However one can only pray that the situation gets stabilised soon so that the world could finally move on to a positive future without any wars to come.

The havoc created in the Indian markets is huge from all such instances. The results this time haven’t been satisfactory for most of the companies. However the retail investors are bullish on the Indian Economy. This is the only reason which has kept the markets tight. The US markets tragic fall triggered an unseen sell off in Indian markets. This created a loss of almost 350 points in Nifty50 which wiped out gains of investors.

With this the market volatility began to rise as the stability factor is still missing in Indian Indices. This week has been like a roller coaster ride for the Stock markets. The Nifty50 has been moving in the range of 15700 to 16300. The rally of 600 points in either direction is coming really quick. This has caused an investor’s mindset to think whether to average out the holdings or not. The reason is the bottom of the markets is said to be 15700. But the momentum in the markets suggest otherwise. Hence one can only imagine the freefall if the markets go below this level.

However on the other hand the markets showed major recovery when the USA sell off day was over. The SGX Nifty showed a 250 points gain overnight. Alongside this the markets witnessed a gain of almost 450 points on the next day. This indicated that the markets reversed the entire momentum within a day. But with the Indian indices there is never one end to a story. The SGX Nifty after the Friday Session posted a downfall of almost 100 points which made the markets fair and square of the early losses and gains of the week.

Hence one can only wish if the markets go straight in the upside direction now on. However given the situation it can be assumed that before the month ends markets would definitely show 16800 levels in Nifty 50. Regardless of the assumptions one cannot be sure of any movements in the markets in the short term. Hence SL trading is a must in today’s market situation.