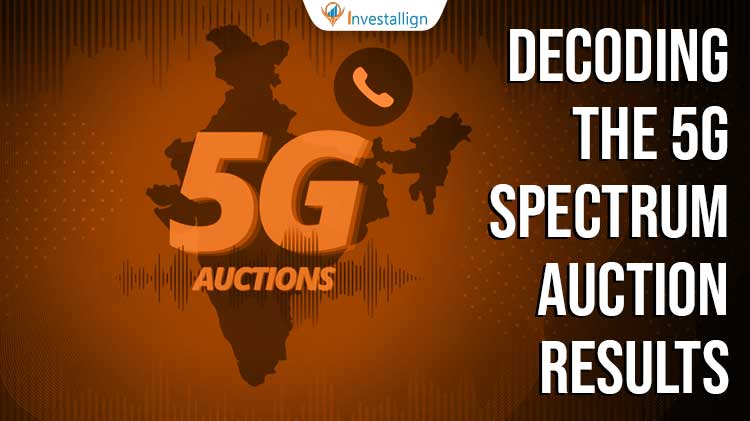 5G Spectrum has been one of the trending news since the 26th of July. The reason behind is that the auction for the same was initiated. The 5G spectrum is a combination of different bands sold together for enhancing the data speed in the Indian domain. This includes a combination of 600 MHz, 700 Mhz, 800 Mhz, 900 Mhz, 1800 Mhz, 2100 Mhz, 2300 Mhz, 2500 Mhz, 3300 Mhz and 26 Ghz. The sum total of 72 Ghz of radiowaves was put on auction. The amount of the same at base price was 4.3 Trillion Rs. The Indian Telecom companies like Reliance Jio, Bharti Airtel, Vodafone Idea had participated in the auction. To a surprise the richest Indian Gautam Adani had also put forward bids from his Adani Enterprises Limited.

The auction amount in total was close to 1.5 Trillion Rs. This was the biggest spectrum auction in the history of the Indian telecom industry.

The Auction was won by none other than the telecom giant Reliance Jio. The reason was the company bid for nearly half of the  entire auction bids. The Reliance Jio bid for more than 88000 Crore Rs in the auction for 5G spectrum bands. Following Reliance Bharti Airtel was the second highest bidder at 43084 Crore Rs. Vodafone Idea was next up with a bid of 18800 Crore Rs. At the end comes Adani Enterprises which bid for 212 Crore Rs. This is also less than 1 percent of the entire bidding amount.

The Biggest bidder in the auction spent 88078 Crore Rs for 24740 Mhz of radio waves in total. These waves are differentiated across 5 radio wave bands. These will enable the company to offer 10 times faster services than 4G networks. The result of this will provide lag free connectivity and real time data sharing for the customers. The acquisition includes the 700 Mhz of band which can provide signals in a range of 6 to 10 kilometres with a single tower. This network is spread across all 22 zones of telecom connectivity in the Indian domain. Apart from this, Jio also acquired 800 Mhz, 1800 Mhz, 3300 Mhz and 26 Ghz of radio waves. This will empower Jio to create one of the most advanced 5G networking in the world.

Akash Ambani shared his vision of making Jio the path shower of the Indian 5G era. Jio has created world records since the 6 years of its launch. The company has managed to give the best 4G connectivity in the world. The company’s connectivity binds more than 400 million customers and provides high speed connection and most affordable digital services. The same scenario will be repeated with the launch of 5G connectivity.

The Birla group owned Bharti Airtel was the second biggest bidder in the auction with an amount of 43084 Crore Rs. The company has participated in auctioning for 900 Mhz, 1800 Mhz, 2300 Mhz, 3300 Mhz and 26 Ghz. With this acquisition the company will not be needing any additional expenditure on the spectrum for the years to come. The Airtel’s estimates describe that it has the widest mobile broadband footprint across the Indian region. This has enabled the company to position it well for the 5G spectrum as well.

The debt ridden Vodafone Idea has been trying to get back on its feet for a very long time. All of this started with the dues pending for the spectrum itself. In this auction Vodafone Idea spent a hefty 18800 Crore Rs. This includes auction for 3300 Mhz and 26 Ghz. The company is focussing on its prime areas to provide the 5G services which are 17 priority circles. Similarly the 26 Ghz waves are targeted for 16 circles. Thus the company wants to strategise its offerings and provide the best services to its customers in a targeted area. The additional 4G spectrum for three states like Andhra Pradesh, Punjab and Karnataka will improve its customer experience in those areas.

The latest and new bird in the telecom industry has been shown by Gautam Adani and his Adani Group. Under the Adani Enterprises Limited Gautam Adani has bid for only 26 Ghz of network. This does not relate with the mobile plans of networking for mobile users. This is purely based on setting up a private network for end to end communication. The target areas for Adani group are Gujarat, Andhra Pradesh, Tamil Nadu, Rajasthan and Mumbai.

The richest Indian is marking his entry into all forms of business in current times. A recent experience of the same is seen in the cement Industry when Adani Group took over Holcim Group’s assets. The Adani group is trying to penetrate into all the business segments which seem sustainable for a longer period of time. With this one can assume that the Group can also enter the networking segment as well in the future.