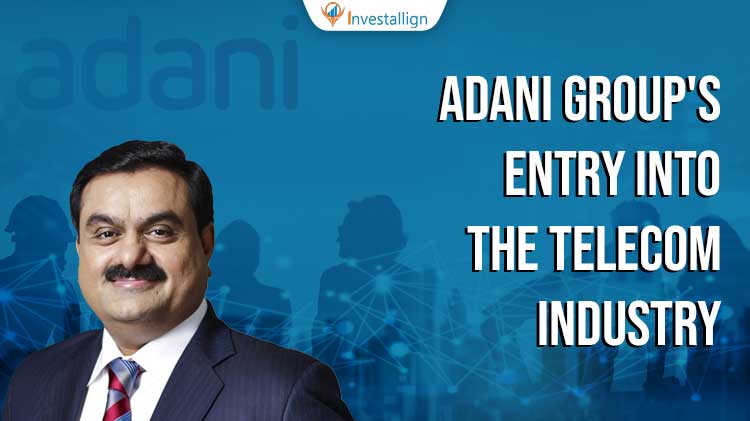 Adani Group has been in the news many times nowadays. The reason behind the same is the company’s versatility and increasing crunch of expansion into multiple segments. The previous major news from the firm came in the form of acquisition of Holcim group’s ACC Cement and Ambuja Cement. With this the company set its foot into the cement industry. As per the company it did the same to get cement for expanding its business line at affordable prices and also to increase the exposure of Indian cement to the entire construction segment. The current news is regarding the company’s expansion in another sector. The segment is telecom.

Yes, Adani group has given clear hints that it will enter the telecom bidding for 5G spectrum. The company has come up with another Adani Group Company known as Adani Data Networks. The company is a subsidiary of Adani Enterprises Limited.

Penetration into the Telecom Entry

The Adani Group is looking to enter the telecom industry through the bidding war of 5G spectrum. Currently the same is underway. There are 3 major players in the telecom industry in India. They are Vodafone Idea, Jio and Airtel. This segment is almost a duopoly of Airtel and Jio given the balance sheet situation of Vodafone Idea. The Adani Group is looking to break the monopolies of all these companies during an intense competition in this sector.

Adani group’s promoter and owner Gautam Adani is cash rich currently and he is trying to expand in every business that seems to be profitable in the long run. That was the reason to buy Holcim’s cement companies. The reason Adani stated was that it can be used for affordable cement availability for its companies and also for major construction projects it is going to undertake alongside the commercial sale of the cement.

Similarly the entry into telecom is going to aid Adani’s presence in education, port management, Airports and other businesses that it is already invested into. The Group is going to use the spectrum for private network creation for its businesses from airports and Ports. The auction date is set on 26th July, 2022. However if any bidders want to back out the last date for the same is 19th July, 2022.

The sale includes 72 GHz of 5G frequency. This could equal the base price of 4.5 Lakh Crore Rs. The airwaves are scheduled to be auctioned for 20 years. Thai would be done under 10 bands between 600 Mhz to 26 Ghz. The prices demanded by the telecom

companies for the same are 90% less than suggested by the regulator back in 2018.

This is the first time that Adani and Ambani will be locked up in a direct battle. Before this scenario as well both these companies have had a face off but it was not directly related to each other. However this situation will put both the richies in front of each other. The companies have been recently getting an overlap in their interests. The Reliance group has been into petrochemicals for a long time and Adani Group has initiated its operations in the same department. The Adani group had set up its renewable energy business long before the Reliance Industries hated the same segment. This is another overlap between the companies in the telecom industry.

Other Players and Information

The entire spectrum bidding will be based on EMD or earnest money deposits. This is like a token given against the confirmation of buying the spectrum The higher earnest money deposits will be considered first for every area where the bidding has been made. The companies aligned for the bidding are Bharti Airtel with a net worth of more than 75500 Crore Rs and a paid up capital of 2795 Crore Rs. Alongside this another major player is Jio with a net worth of 1.97 Trillion Rs and a paid up capital of 1.54 trillion Rs. The last player is Vodafone Idea with a negative net worth of almost 81000 Crore Rs. The paid up capital of the VI group is 32119 Crore Rs.

To join the latest entry in the telecom segment the Adani Group will list its bidding under the Adani Data Networks a subsidiary of Adani Enterprise limited with a net worth of 4731 Crore Rs. The company has also requested the regulator to consider the net worth of the Adani Enterprise while scrutinising the checkpoints for the spectrum allocation.

The entry of Adani group will tighten the pricing factor in the entry. So far the three companies have been enjoying their places in the industry. However now there will be a tough competition created within the telecom industry. This is truly a great sign for the customers.