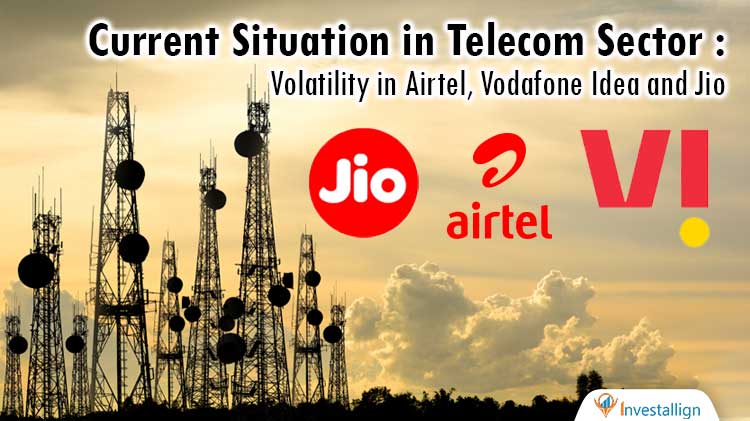 Recently there has been a lot of volatility among the telecom stocks. The major telecom companies such as Bharti Airtel, Vodafone Idea and Reliance (JIO) have shown heavy volatility given the quarterly results and some other important announcements. The major changes in the telecom industry are related to the tariff hike. The companies are rigorously competing with each other and hence the users are getting benefit of lower tariffs till date.

However now Vodafone Idea and Bharti Airtel are focusing on updating their pricing of plans. This is to be done to increase their revenue and get a loyal customer base. The companies want to elaborate their business portfolios and hence they have invested into various services such as WIFI, broadband and set top box. This has been done to get in line with JIO’s strategies in the open market.

However Vodafone Idea’s tariff plans have not been criticized by the TRAI. VI has updated its SMS prices and acne made them costlier than ever. The company has signaled a movement of SMS service to higher tariff brackets. However the company feels that the customers would not be encouraged to port to another company by this.

The October month was full of competition among the telcos. On one side they were beyond the results declaration and on other hand the internet facilities for all the three telcos were tested in the open market. Among the results it was found out that JIO was the best internet service provider in India. Given the barriers for Airtel and Vodafone Idea due to the wider customer base in 2G and 3G the internet speed gap has been reduced but it is not enough in the current market scenario. The highest speed recorded was 21.9 MBPS. The Airtel’s speed on the other hand was recorded at 13.2 mbps and VI’s speed was recorded at 15.5 mbps from 5 mbps and 6.5 mbps respectively.

Upload Speed and User Base

While the upload speed for VI has been the maximum. VIL has registered a speed of 7.6 mbps for uploads. Airtel has a speed of 5.2 mbps and JIO has a speed of 6.4 mbps. Hence the debt ridden company (Vodafone Idea) serves the top of the uploading speed list.

To a surprise JIO, the market leader lost more than 1.9 Crore users to both these companies and Airtel added 2.74 Lakh Users. Though the number is not big yet the loss for JIO proves that the battle is on between the colonies to take majority share of the market.

In such a competitive environment, the government is trying to sell MTNL assets in the open market. The auction for the same will be done online and the target is to raise approximately 37500 Crore Rs. This is a huge amount for the government. It is a part of the asset monetization drive started earlier this year.

The stocks of Reliance have been very volatile lately due to the Aramco deal failure. The future of Reliance is still not clear given the reduction in usage of fossil fuels. This would give a major blow for the O2C leader. The company is trying to expand its business through JIO and JIO MART but has not shown such success lately.

On the other hand the stocks of Vodafone Idea and Airtel have been increasing continuously. Between such a panic situation in the market these stocks were showing positive gains. However since the last two sessions every stock has shown major loss. Whatever the situation is, a giant in Airtel and Vodafone means that the Reliance JIO is working at optimum power , its potential and liquidity.

The Airtel group is upgrading its portfolio and trying to include cloud systems as well and increase the broadband and set top box business. The marketing campaigns for Airtel are definitely stronger than both the other telecom companies. The future seems secure for Airtel due to its increasing user base and string recovery from revenues and profitability point of view.

While the rise in revenue is a major plus point for Airtel, Vodafone is finally getting a little success in raising funds. The major reason is the 20 years limit from the center to pay the AGE dues. Yes, Airtel and Vodafone have already got a limit extension for 20 years to pay the dues towards the AGR in 20 years. However Airtel has given another hint to copy for a moratorium of 4 years to pay the dues. The company has been aggressive in payment towards the outstanding so that the profit figures can rise over the period of time. There was an announcement from the government towards the telecom companies to pay their dues in a moratorium of 4 years. Sunil Mittal agreed to the same and the company had announced that the dues would be paid with the above mode.

This was the major reason for the constant upscale in prices of Bharti Airtel in the previous weeks. Also Vodafone Idea has been gaining well from its bottom of 6 Rs a few months ago.