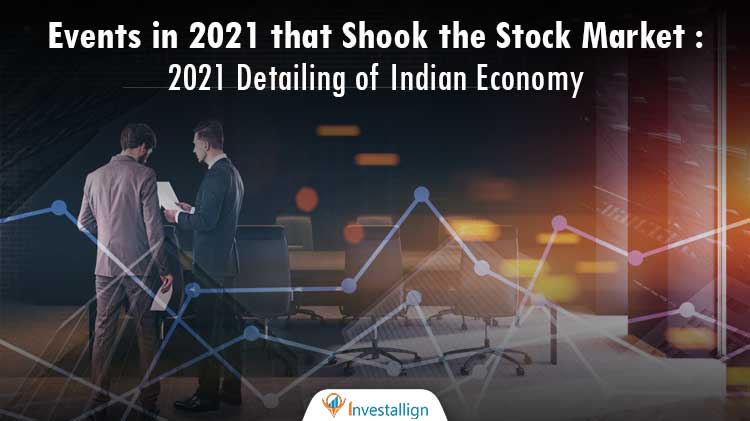 The year 2021 was a benchmark year for the Indian Equity markets. The Indian indexes showed a rapid growth and more than 50% returns. This was possible due to the continuous bull run from the blue chip stocks and the Mid Caps. The FII and Retail Investors together put up a great show in 2021. This was the most important reason for the markets getting into a higher range. The funds have been coming in continuously by the FII and Indian investors and hence the Indian markets are noticing such high prices.

Well the retail investors have become hyperactive given the IPO run in Indian Markets. Any IPO with good financials was getting oversubscribed and receiving minimum 40% returns on average. This lured every class of people to invest their savings into the markets for getting multi bagger returns. This has proven to be extremely helpful in expanding the market cap of Indian Equities. Thus the Retail investors and IPO run were major factors for the boost in Indian Indexes.

While referring to the government’s share in the 2021 year, LIC IPO is the first name that comes to mind. The 6 Lakh Crore Monetization scheme was brought to monetize the government assets so that cash can be generated from the same. As referring to the same goal, the government of India brought in the proposal of LIC IPO. LIC is the largest insurance company of India and even among the top companies in the world. It is like a liquid bank for the government. Hence its IPO would definitely be a multibagger. The Government has a clear vision of divesting stake in the coat so that excess liquidity can be generated and LIC can be valued as per its potential.

Apart from this another major deal was referring to Tata’s acquisition of Air India. The most stressed company in Government’s [portfolio was kept for sale in the open market for a long time. However finally in 20201 Tata Sons have won the bid for its acquisition. Thus Air India will finally revolutionize with his move.

The best move by the government for 2021 was to create NARCL. In other words it is the bad bank of India. The company buys stressed loans from the banks and provides them to the government. Securities and liquidity in proportion. Hence solving the major problem of Bad Loans in India. Referring to add loans, one cannot forget the Mehul Choksi Case. The fugitive was caught and thus the banking system took a sigh of relief.

The new rule introduction for T+1 cycle for trade settlement is a shock for the traders. This would enable the collection of money in a quick time frame. Hence this would not only affect the volume but also the liquidity in the Indian markets. Alongside this SEBI has initiated a very great move through introduction of international Stock exchange through Indian Exchanges. The center for the same is getting ready at GIFT City.

Through this the entire system for buying international stocks would be charged for Indian Investors. The previous system gave them depository receipts from the INdian banks for their buying position. Whereas now they will directly receive stocks in their DEMAT accounts and would be enabled to buy and sell stocks at any time they want.

Farmers’s Protests have been in the key limelight throughout the year. The three farm laws were introduced by the government in the Economy. However the farmers were keen on agitating against the same. Hence through a one year strive they were able to revoke the same from the government. However this would have major after effects in the economy as the farmers were away from their lands for almost a year. This would affect the agricultural products in India.

Government also took up steps to intimate the big techies on the world like Facebook, Twitter etc. regarding the spread of misled information. This was caused post the Jamia College incident which led to riots in Delhi. Petrol and Diesel prices reached all time high in the Indian Domain given the high tax charged by the government on it.

Reliance has been suffering currently due to two major heartbreaks this year. Firstly the Amazon hindrance in the Future Group deal caused a major turbulence in its rising prices. Alongside this the Aramco deal breakdown was not less than a heart attack. This tanked the shares’ valuation majorly. However currently Reliance And Adani both are working on their dream project for the future – GREEN ENERGY.

China was in the limelight this year as well. COVID was the first reason for the Chinese economy to fall and post that Evergrande Crisis had also affected the Chinese government. The power crisis along with the coal crisis in China closed its manufacturing sites across the country. This also made the entire nation work into shifts hence they can restore power supply for daily use and even for future.

Thus a lot of events happened in 2021 which shook the markets and even motivated it to advance forward. However in current times the OMICRON Variant has been affecting the Indian economy and multiple places have received lockdown instructions as well. If the situation persist for long than major effects can be  noticed in Indian markets in a short tenure.