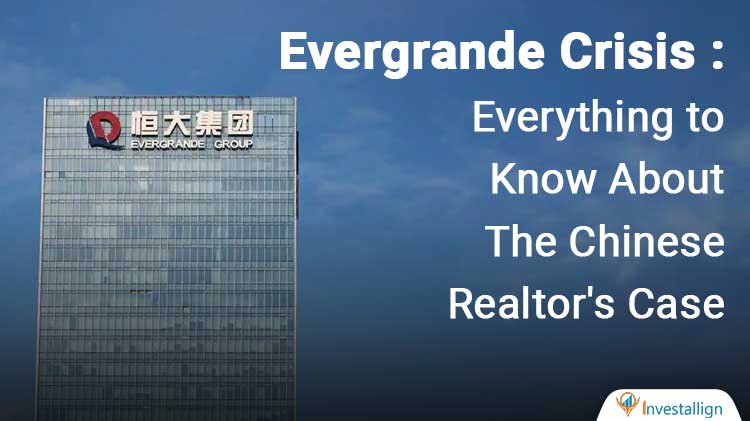 Evergrande is one of China’s largest property developers. It has been contributing close to 30% in China’s Real Estate Segment. The company has been included in the Global 50 companies list as well. This symbolizes the company’s dominance in the world as well as Chinese markets. The revenue from the company claims for fulfilling the jobs requirement close to 3.8 Million dollars. Along with this there are more than 2 Lakh employees involved in the company’s working directly. Evergrande has been working initially in the real estate segment and project developing segment. However later the business operations diversified into buying soccer teams, creating theme parks, sports divisions and Electric vehicles.

The initial phase was going well for the company but it got hit badly by the overburdened debt arising out of such a diversified business. This has been a long time problem but it has been into the eyes recently due to the company’s statement on defaulting the interest payment.

Talking about the company’s best projects, it is currently working on creating the largest soccer stadium in the world with a capacity of 1 Lakh people. The stadium is made in the shape of Lotus flower with a costing of 1.7 Billion Dollar for the site. Also it has been working on creating a theme park in the shape of an Ocean Flower. It has created this site on an island which comprises theme parks, malls, amusement parks. The site is almost ready for tourists since the trial run phase is almost getting to its end.

The crisis for the company was numbered at 660 Billion Dollars initially, however the numbers were curtailed to 300 Billion dollars in the recent reports.

The Story Behind the Crisis

Evergrande has achieved the title for being the developer with highest debt under its financial sheets. The Current liabilities of the company are around 300 Billion Dollars and this has been a result of not managing its multiple businesses well and specifically not managing the financials of the firms. The company has been reporting the crisis to the stock exchange earlier in this month.

However the investors weren’t worried much as the company said that it will cater funds from outside or also sell some of its assets to get itself running aloof. However the company failed to cater to statements as it cannot get outside help for its indebted business.

The People Bank of China came in and bailed out the company’s first payment but the next patient for Bonds is due soon. However the company hasn’t released any statements so far for the same. It seems impossible to pay back the money but the Chinese Government has intervened in the case and is ready to bail out the giant as it wants the people, who have invested in the company or bought unfinished properties from the realtor to feel safe.

The crisis can hit the world economy at a bigger scale. The reason is the company’s reach into the Chinese markets. Also China being Asia’s biggest economy can give a big blow to the world markets. Previously when the company issued a statement that it will get help from outside, the stocks rose for almost 20% and then the next day slipped back. The recent session posted a loss of 8% from the company on exchanges.

The issue is not a new one for the Chinese government. The reason is the previous year, due to COVID there were multiple developers who had defaulted on their loan payments and created havoc in the Chinese markets. However the situation was to blame back then but the Chinese realty market has been under stress since then. This is also the reason why the Chinese government has issued notice to downsize the loan amounts issued by the banks to the realty sector. The Government doesn’t want the debt mountain to go along. In one way if Evergrande defaults on its further payments it would be a huge test for the Chinese economy.

Solution For the Crisis

Evergrande has recently announced that it has sought outside help from financial experts to analyse the situation and suggest a way out. This procedure has been going on since 15th September. The company has also made it clear that it wants to sell its electric vehicle business and property assets to get out of this jam. However there hasn’t been any progress in that situation. The reason is no one wants to make their hands red in a company which is bleeding everyday.

The company has suffered enough due to this so far. The situation is such that the valuation in the markets for Evergrande has slid by 85%. Yes, the shares have gone from 1.8$ to 0.3$. Amidst such a situation the recent news on China cutting its power supply to the household and industrial usage is even more shocking. This signals that the power sector in the country is running low on resources and hence the cut down. Many MNCs except Apple have suffered from the cutdown issued on 27th September. The road ahead for the Chinese economy is very rough. The Government and Banks need to come together to save the realtor’s crisis or else one can foresee a huge fall in the Chinese markets as well as the Global Indices.