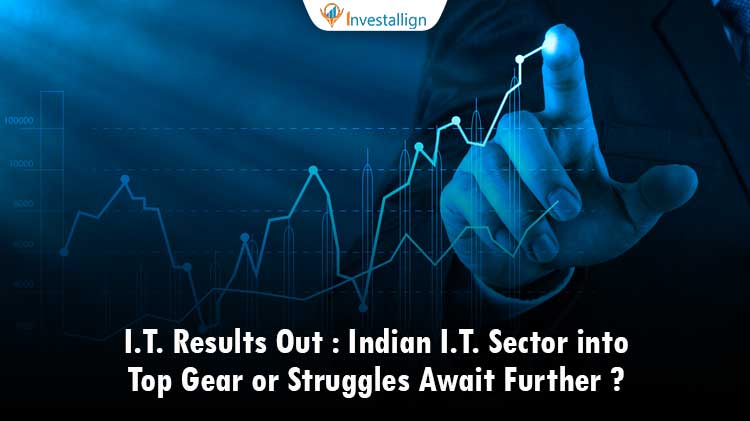 Major IT companies of India announced their Q3FY21-22 results on 12 Jan 2022. All the three companies announced remarkable results and outperformed the estimates.

Infosys is a 40-year-old Indian company providing consulting, technology, outsourcing and next-generation digital services, enabling clients to execute strategies for their digital transformation. It has a market cap of Rs. 7 lakh crores with a share price of Rs. 1877 as on 12 Jan 2022. It is the first Indian IT company to be listed on NASDAQ paving the way for India to emerge as a global destination for software services talent.

The company reported a 7.7% Q-o-Q rise in its revenue for the period Q3FY21-22. It further reported a 12% rise in its net profit to Rs. 5809 crores. The main reason for such spectacular earnings is because of the robust deal pipeline, demand for digital services and due to the mega digital deal with Dailmer. The revenue stood at Rs. 31867 crores. The company further revised its yearly revenue growth estimates to 19.5%-20% from earlier projection of 16.5%- 17.5%. It has increased its global hiring programme to 55000 in FY2022. The company reported 23.5% operating profit margin. The employee costs, subcontractor cost and software packaging costs increased 4%, 15% and 33.5% Q-o-Q respectively.

One of the oldest IT companies of India, Wipro provides consulting and business processing services all around the world. It is now a leading global IT company having a market cap of Rs. 3.7 lakh crores. It uses cognitive computing, hyper-automation, robotics, cloud, analytics and emerging technologies to help clients get accustomed to the digital world and make them successful.

Previous quarter was outstanding was Wipro. However the current results have been down by both aspects of the company;’s profit and Dalal Street’s expectations. The company was expected to improve its profits this year as well. However there was a 8.5% dip in profits. On the other hand revenues have also gone down resulting from operations. The revenue for YOY results was 15278 Crore Rs and it is just 12596 Crore Rs. Hence the company has been lacking on earning through its main source of income.

However on the positive side Wipro has been successful to take over Edgile and LeanSwift Solutions this quarter, Hence the cash bank would be affected due to the same. This can be a reason for the dip in profits as well. Also a dividend of 1 Re. is from the company. Hence it has been taking good care of its stakeholders even in such times.

The revenue has increased by 4.3% on a YOY basis and the Margins have also increased to 25%. Thus the company is performing well on overall criteria. The company has declared a dividend of 7 Rs per share for every shareholder. The contract value of the company 7.6 Billion Dollars

Winner From the Results

The winner among the three firms is Infosys. There are three major reasons behind this assumption. First one is the PCV of Infosys. The Total contract value for Infosys has been recorded at 2.53 Billion dollars which is higher than its previous TCV values. However it is lower than TCS but on other hand it has been able to generate a growth of 7.6% in revenues. The quarterly net profits for Infosys have increased in maximum proportion in comparison to others . The percentage of growth in profits is 7.1% in comparison to previous quarters.

However there were many issues faced by Infosys this year among which the major one was related to the Income Tax Website Technical Glitches. The company received multiple deadlines from the government to fix the issue. Finally it was able to develop a new portal. Wipro was weak on its profit generation and revenue from operations. However TCS was extremely weak in growing the profit rate. The rate was stable at 1.4% this quarter.