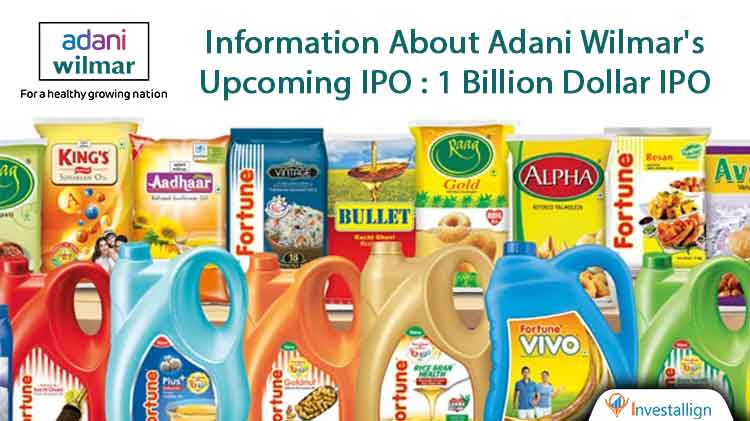 Adani group has recently entered the 100 billion dollar group. The company is leading the stock market gains through its listed firms. The Parent company Adani Group workers into multiple segments. The major business of the company is related to commodities, ports, management and infrastructure. The listed companies of the group are : Adani Enterprise, Adani Ports, Adani Power, Adani Transmission, Adani Total Gas and Adani Green. All these companies have given three to four digit returns in the current market situation. For more details on Adani Group Companies visit https://www.investallign.in/the-remarkable-bull-run-of-adani-group/

Adani Wilmar is very active in the edible oil segment. The company is a partnership between Adani group and Singapore Giant Wilmar. Hence the name Adani Wilmar. The company is famous with the name of its brand Fortune. The company believes in speedy distribution and production so that it can meet the needs of the consumers.

The company initiated its operations in 1999 with the partnership agreement. Wilmar is one of the leaders in agri business in Asia. heaven they had their edge in the market since their inception. Following the in-house research and development the company launched various brands under its purview. Among the most famous ones is Fortune Oil. It is edible oil which has earned the title as a generic name in household usage. The company subsequently also launched its other products such as Rice, Sooji, MMaida, Rava, Pulses and Besan. Recently it has also launched Rice Bran Oil and Vivo Oil. They are the additions into its edible oil line.

The company also owns the Rupchanda brand which is a famous oil product of Bangladesh. The firm has its major refining business activities in Bangladesh. In merely two decades the company has 22 units for refining and producing edible oil of almost 16800 tonnes per day.

Adani Wilmar recently launched Xpert Pro Sugar Conscious and Xpert Pro-immunity Oils. These oils aid to manage blood sugar levels and improve immunity. Adani Wilmar owns the privilege of having the most widespread distribution network for edible oils. It has more than 95 stock points and 5000+ distributors. The firm also has 10% direct retail reach with more than 1.4 Million outlets across India.

The company not only trades domestically but also includes exports to 19 countries under its sale book. The countries are New Zealand, Australia, Singapore and others in Middle East Asia, South East Asia and East Asia.

Adani Wilmar also has a plant in Mundra which produces oleo chemicals. Its production capacity is close to 400 tonnes per day. The firm also has a capacity of processing 1200 tonnes of castor seeds per day. Adani Wilmar is also involved in Ready to cook food business, Bakery fats, Soya Chunkies, Soap Noodles, Refined glycerin and others.

The board of Adani Wilmar has stated that they aim to become the market leader among food companies by 2027. The major competitors of the company are Patanjali, Mother Dairy, Cargill, Marico etc. Hence it is a tough fight in the market.

The recent board meeting of the company aimed to launch an IPO by the end of this year. The DRHP is into process right now, The investment banks preparing the same are Kotak Mahindra and JP Morgan. There have also been rumors of involvement of BofA Securities and Credit Suisse. The registrar for the company would be BIGSHARE SERVICES PVT. LTD. and the lead manager as of now is HEM securities Limited.

The tentative date for filing of DRHP is by the end of June or July. The IPO is aimed to raise 1 billion dollars from the public. This is a correct time for IPO launch on behalf of the company given the tremendous growth of the equity segment. It is also very indicative how investors are receiving the Quality IPOs.

Adani Wilmar aims to become a company worth almost 8.5 billion dollars post IPO launch. The reason for being so bullish is the recent launch of Wilmar IPO in China. The company Collected more than 2.8 Billion dollars through IPO. Also all the major companies of Adani Group are majorly infrastructure or Power businesses. In this time displaying the consumer business in the market would prove to be a good move.

The IPO money would aid the company to fulfil the expansion plans. Right now the consumer business in India is constantly expanding. Among this expansion the CEO of company Angshu Mallick has stressed on double digit growth for upcoming years. As challenging as it sounds the company has the infrastructure for the same and can accomplish the target as well.

If the IPO is a success then it would boost the wealth of the Adani Family. Also the company will become the 7th Entity of Adani Group to get listed in the market. Also one should not forget the unbelievable run of Adani Group in the past year. With the launch of IPO the company wants to gain the advantage of its quick run and bag more valuation.