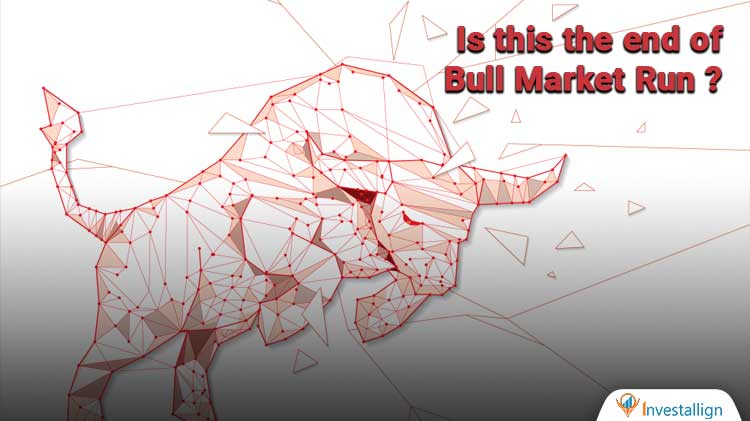 The bull run that started from 15800 levels has finally faced some roadblocks. There was no single week where the market faced two consecutive days of red zone. This has been completed today with the market drifting down even after such a strong bull market. There are multiple reasons behind this run, however the major ones are Evergrande and Profit booking along with Fed Taper. These sessions are a sign of caution for the investors and traders but is it sure that the bull rally has ended and the market will consolidate.

Its very particular to point out the fact that the rally entered its strong zone post the 16600 levels. After crossing these levels and crossing the 17000 peak the markets registered an unbelievable gain of 700 points within 3 days.

This has been the rally which gained 1000 points in no more than 1 week and also pushed all the index and major stocks to cross their all time highs. For instance the Bajaj Finance and Bajaj Finserv duo both crossed their all time highs. They made a remarkable gain of 1000 points (Bajaj Finance) and 2500 points (Bajaj Finserv) in this bull rally. The mammoth of the market, Reliance also crossed it’s all time high and is the major reason why the markets have been intact till date. The Banking stocks also croissant their highs and the Bank Nifty crossed its previous all time high of 37800 to go to new levels.

Sensex has been a major point of attraction as it crossed the 60000 Milestone. The gain from 50000 to 60000 came in less than a year. This has been a historic run for the Indian Stock markets as not only the blue chips but the mid caps have also been performing well. The small caps and the penny stocks have been moving in their ranges and also rising with the gains in the market. Henceforth the market has been in a constant trend of gains.

Reasons Behind the Fall

There are multiple theories behind the fall. The markets have been under the corrective zone right now after a tremendous gain of 12% over the last month. Thus the market is bound to get settled up and consolidated. It is said that the market consolidates for minimum 1/3 of its gains in every rally. However right now the situation is nowhere near that figure. The reason is the market sentiment. IF one notices the Nifty movements it can become very clear that it is getting a quick rebound at every support level.

Another reason for the bear market possibility i9s the Evergrande Crisis and the Chinese Electricity Shortage. China is the hub for Textile, Aluminum and multiple other commodities. It is the largest Asian economy and it is currently facing two problems together. One is the shortage of power and electricity and another one is the defaulting company Evergrande.

The power shortage is causing problems for the MNCs settled there to work efficiently. Also the Evergrande Crisis is costing it around 330 Billion Dollars of default. The company is one of the biggest developers and has exposure to multiple international and local financial institutions. It also has affected the metal and cement industry worldwide.

Along with this the FED taper has always been on the edge and it is not followed by the month end and position conversion period. Yes, 30th September is the day when people would roll over their future positions and create new ones for the upcoming month. In Such a situation where the flow of market has been interrupted by 2 constant breaks it is very risky to get any trades into motion as the market could dive any way based on the demand and supply equilibrium and hence cause major losses.

Is the Bull Rally Ended ?

The question is really tough as it is not possible to determine the direction given the movements presented by Nifty. At once in the 29th September’s session it seemed that markets were moving down as the Nifty got a rebound and gained 80 points from 17700 levels within a fraction of time. Contrary to that at the closing bell it got settled back to 17700 levels with a major fall. The same scenario was followed the other day. The Nifty gave a high loss of close to 220 points and then got lifted up by almost 50%.

Such a situation is often termed a carry forward scenario. When people square off their previous position and create the new position it gets flawed by such Nifty fluctuations. These can be temporary as well in such a bull run and also cause Nifty to break all its support levels at once. Hence one should be firm with his or her positions and gain perspective for the longer term. Such short term fluctuations can cau8se major value degradation but the future is always bright for the Indian Markets.