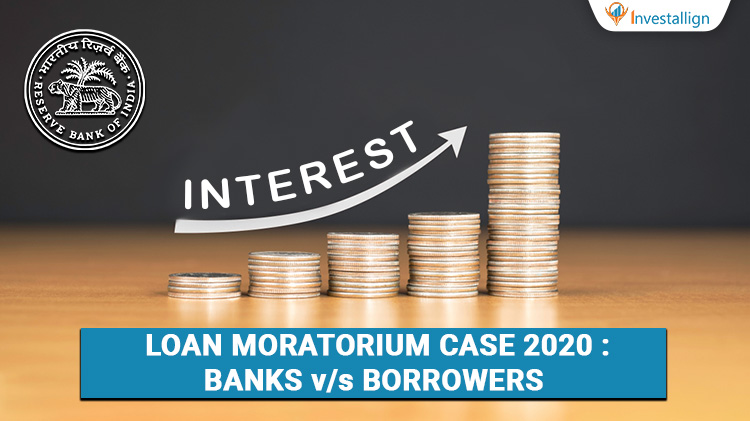 Loan moratorium is one of  the most trending topics nowadays because value of banks and Indian market are cruising to new highs. The moratorium option has been given to borrowers from March 2020 due to lockdown. Initially it was planned for three months but it got extended till Aug 2020. The entire case is based on one subject which is the interest waiver from loan EMI of those who opted for moratorium.

Loan moratorium was an option given by the Supreme court of India during the pandemic situation (lockdown). The reason was to ease pressure on borrowers for repayment in form of EMI. It was done to prevent the rising number of NPA because of stagnation in income of people and economic progress. Basically the option availed the borrowers to not pay EMI for those months and become stress free from such financial borrowings.

Loan moratorium can be availed on all term loans which were outstanding before March 2020. If the supreme court agrees to waive interest the banking sector will take a hit of Rs. 6 lakh crore and if it is rejected there are high chances of loans turning into NPA’s.

Are There Any Charges While Opting for Moratorium ?

If a person takes the option for banking moratorium doesn’t imply they would get away with any extra charges. They all will have to pay interest for late payment and such interest maybe charged as EMI extension or direct charge added into EMI amount. The whole battle is regarding this interest amount. Borrowers demand to waive the same and banks claims that interest is their right because of deferred payments. Hence moratorium is just another way to restrain the number of NPA in the banking system.

As per normal rules and regulations, whenever a borrower delays or fails to pay EMI on time his credit score is downgraded. However in Loan moratorium the credit score wont get affected. Hence the borrowers will enjoy a EMI free time frame without the fear of getting a hit on their credit scores.

There are a lot of implications if a person opts for a loan moratorium option. This would definitely enable a rain check on EMI’s but the entire amount needs to be paid. Such pass on EMI doesn’t mean they are forgiven.

When a person defaults on EMI for 2 months his EMI tenure extends for almost 6 to 10 months approximately. This means more delay will trigger an extension in repayment’s time frame.

There are no charges levied on obtaining this option but those skipping to pay the EMI right now would be charged with interest on deferred payments as per the standard rule. Due to this the amount of EMI would rise.

If we understand by a home loan example then any person who has taken a loan of Rs. 30 lakh and  has opted for loan moratorium option. He is required to pay Rs. 2.4 lakhs in form od interest for deferred payment of six month which is equivalent to additional 8 installments.

There are many issues which were created because of the moratorium news. They are listed below :

Presently as per the session on 17th December the supreme court has pushed its verdict date ahead due to the grant of extra moratorium time for the stressed sectors. It is expected that the court will give its verdict soon.

Till then The supreme court is constantly asking RBI and FINMIN to find a way to tackle such a situation because the  system cannot fail and the plea by the common people cannot be ignored as well. There are a lot of theories stating that the rise in prices of every banking stock is to let them cover such losses that are gonna come in when the Supreme court would impart its decision.