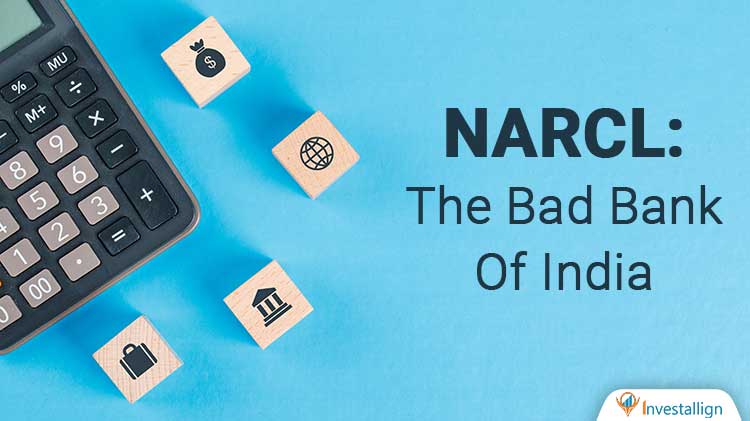 In the Indian economy the debt system has run out of time. Here is a huge pile of bad debts with banks and no further proceedings are carried on. Sometimes it takes years to resolve the dispute and till the loss of interest is burdened upon the banks. To avoid such delays and to gear up the procedure for resolutions, NARCL has been set up.

Under the union budget of the current year the Finance minister laid a lot of stress on such problems. The reason is an increasing number of frauds in the banking systems and such scams later on get added to the fraudulent loan section. Under this section inquiries are done on the people not paying back the loan. This procedure takes years to get monetized and until then inflation and interest have already churned up a large part of resources and the actual amount of loan obviously. The best example is the recent procedures going on for the Mehul Choksi Case.

The NARCL came into effect as a view for having a combination of asset management company and Asset Reconstruction company. This organization takes the stressed debt on it and clears the bank’s burden and proceedings. Due to its work with the bad loans it is also referred as bad bank of India.

Right now NARCL is a registered company. The company has been set up in Mumbai. The paid up capital mentioned in the company’s books is close to 75 Crore Rs. The company was recently established on 7th July, 2021.

Goal and View Regarding Management of Bad Loans

The Indian Bank Association has set up NARCL. The company has been a part of the plan where the IBA would be setting up an asset management company and asset reconstruction company. The first part of it is NARCL and the second part is IDMCL. The term IDMCL stands for Indian Debt Management Company Limited. The IBA has begun its operations for getting a license of asset reconstruction company (IDMCL). Soon the procedure would get over and then there would be an entire separate section where the issue for bad loins would be heard and solved.

The problems related to NPA would be handled by this combination. The banks would pass over their stressed debts to these companies and they would resolve the same. The resolution would come through sleeping off the assets that are completely available for auction or sale. Firstly the handling of the assets would be taken over and later on there would be a bidding procedure to get higher bids for the available assets. This way around the entire issue for debt would be solved and the amount would be recovered.

The appeal for such an organisation was made a year ago. Today the existence of such organisations would be made possible. The NARCL has been set up with the board and the licensing procedure for IDMCL is left out.

As mentioned above the banks would pass in their stressed assets to the company. Now in the current phase it is said that banks would dispose of cases worth 89000 Crore Rs to the organisation. Moving ahead more cases worth 1.5 Lakh Crore would be handed over.

There have been lots of cases and companies assigned to the organization under the NPA case. The major ones are Amtex Auto, Lavasa Corporation, Castex technologies, Wind World India, Visa Steel, Reliance Naval and Engineering etc. Hence the entire list is ready and the company has close to 90000 Crore Rs of business before hand.

Through this one thing is very identifiable that India’s pocket is a lot full with the bad loans and fraud loans. This issue needs to be solved very quickly as it not only kills the liquidity but also makes the value of money erode over a period of time. The major effects of Inflation and interest are clearly seen on the banks. This comes with a combined effect of asset selling and purchasing costs. Thus the entire procedure is costly and time consuming. The time money remains blocked is like a poisonous state for banks (killing their liquidity out of nowhere).

Canara Bank has been one of the sponsors for National Asset Reconstruction Company. It has bought 10 to 12% equity stake in the company.

If we look at this pattern it is quite interesting and a resource savior. The banks would not need to process the bad loans and drag on their problems with courts. They would get instant money and securities against the assets. On the other hand NARCL would take on the assets and sell them off so that they could recover from these NPA’s. Hence a complete cycle which removes the debts and also provides liquidity instantly.