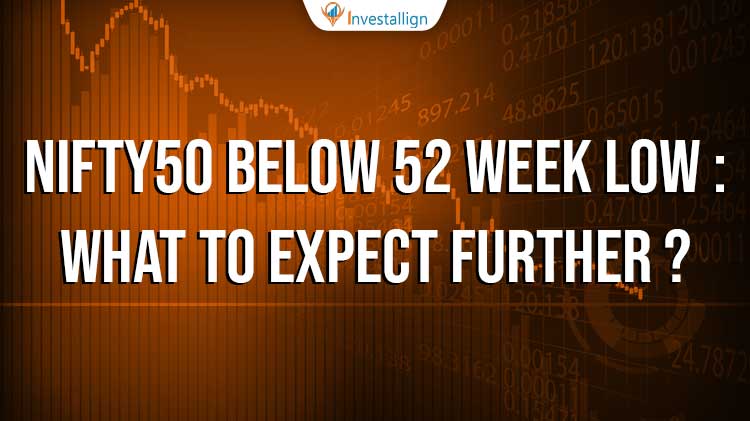 The Indian Stock market is in one of the most terrible bear grips. The markets are not at all moving up since the last 1 week. The entire market momentum has turned downside and no one is expecting a recovery any sooner. The Nifty50 touched 15183 levels which is its 52 week low level. The market has gone down the crucial 15200 levels. Bank Nifty is also trailing below 33000 Levels and the Sensex has come down to 51600 levels. All this points out the fact that the Indian Stock Market is highly unstable.

The major reason behind this is not anything more than the existing problems. The inflation rate is going high and to combat this the RBI is constantly hiking the rates of the banking industry in India. Alongside this the major market mayhem started when the Fed increased the rate by 75 bps in the last meeting. This means that the borrowing from the businesses is going to shrink down and the liquidity in the system is brought under control.

Currently the concerns are not just limited to inflation. The major concerns are regarding stagflation and recession. The economy is under a high alert zone. The reason is some economists believe that the world would face recession in 2023. If this happens for a short time then it is not harmful to the economy. However if the same happens over a long period of time then the entire economy will be disrupted.

Every stock in the Nifty50 and the entire stock market is reeling from losses. Stocks like Shree Cement, Bajaj Finance, Bajaj Finserv etc. are highly depleted in valuations. TCS, Infosys, Wipro are near their 52 week lows. ONGC, Tata Steel, UPL etc. are bleeding red. Reliance is not able to bring the market momentum back and all this is going on while inflation is at its peak. The investors are afraid that the markets will go down to 14200 Levels and it won’t be possible for the index to recover to 18600 again before the year ends. If we look closely then the Nifty50 has lost almost 1500 points of gian within the last 2 weeks.

The Indian index is not the only one that’s sinking in red. The US markets are also going down the same road. An analysis shows that almost 75% of the Nifty 50 stocks are near the 200 DMA levels. It is estimated that the markets will fall back to 14200 levels but there is still some hope for recovery at the bottom of 15000 levels.

Stocks to Watch For ?

The current scenario has caused erosion of valuation in most of the Indian equities. Amongst them the good stocks with strong chances of recovery are Dr. Reddy, Shree Cement, Renuka Sugars, Ultratech Cements, TCS, Wipro, Adani Wilmar, Adani Power, Tata Motors, Tata Power etc. Well the reason for choosing Shree Cement and Ultratech Cement is pretty simple. Adani group has entered the cement business. This has caused a heavy value loss in these stock’s prices. However Ultratech cement has already begun its recovery journey, Shree Cement is way behind. The share that was 31000 Rs is now at 18400 Rs. This means that the upside in this share is quite huge.

Alongside this Adani Power and Adani Wilmar are the ripe stocks in Adani Basket currently given their volumes of trade. Hence one can also bet on these stocks for better returns. Then we have Tata Motors and Tata Power. Tata Motors is expected to grow in the long run as it has started showing dominance in the EV Vehicle segment. Also Tata Power has lost almost 40% of valuation in less than 4 months. Hence the chances for its upside also become rock solid.

The reason for selecting Dr. Reddy is the share’s string support level near 4050 Rs. The stock did not move much even during the market fall of 1500 points in a single day. The stock however fell in the last two trading sessions and is still in the range above the support levels. Dr Reddy has the potential to touch 5000 Rs if the next quarterly results go well for the company.

TCS, Infosys and Wipro are the major value loss stories in current times. The TCS shares are trading close to 3000 Rs from the 3800 Rs levels. The buy back that the company initiated at 4500 Rs gave investors hope for a better return possible in a short time. The entire calculation went wrong when the share was forced to see the 3000 Rs mark due to the market fall. The entire technology sector is currently down due to the market pressure. In normal scenarios we always hear that when the entire market is down traders and investors move their money to the technology sector.

However this formula is not getting applied this time. During last week’s crash, Wipro was at its 52 week low. Thus one can definitely expect huge upside in the technology sector if the market takes a U-turn. The only reason behind this would be the heavy value loss in tech stocks of the Indian equity market.